I’ve never heard about people getting banned from Amazon, and I’m almost positive you couldn’t ever return as much as my family does (think buying 10 different pairs of trainers and returning 9 of them) on a monthly basis!

However, on the gift card side of things… Yeah, I’d never keep a balance on any “account” with any company like that. If there is the option to “refund to card you paid on” I’ll always take that!

Do a Google search and you’ll find plenty of reports. If they will take gift card balances without what I consider a good cause, why would I trust them as a bank?

I’m not saying don’t shop with Amazon. I do too. I’m saying these reports are far too worrying for a bank.

Two ways to look at this news I guess. Stiff competition when moving across the pond or a potential acquisition.

Interesting, but on the face of it doesn’t sound like much competition to Monzo:

the online retail giant has approached several large banks about creating a “checking-account-like product” aimed at “younger customers and those without bank accounts.”

The goal, it seems, is to launch a partnership with a traditional financial institution that would stop short of Amazon becoming a bank itself.

A basic product that won’t have much scope for innovation if they’re essentially making a front-end for an existing bank’s systems.

Edit: Also, this towards the end:

The ability to gather personal data on the spending habits of the young and unbanked, however, would likely be at least as valuable to Amazon as a means to circumvent the fees it pays to payment processors and banks.

Is this in the US or UK? I’ve probably returned a lot of things, and someone I know has even collected a bunch of cosmetics, books, sex toys because they can’t be returned or the seller waives it, and she gets them free

she told me she got one worth £100+ to keep. If that didn’t get her banned, I think regular users wouldn’t be at much risk.

I’ve seen reports both here and in the US. One thing they seem to have in common is the return of defective electronics but I can’t say for sure… It just seems it from stories.

I’ve never heard of it in any country other than the UK and US but that’s probably a language thing not seeing news in their language.

So odd, they have other iffy bits in their company but their customer service has always been on point in my experience! I’d say don’t be worried and just return whatever you want tbh. Don’t live in fear! I’ve never personally known anyone banned. They’d probably give me their left kidney if it helped my situation, that’s how accommodating they are on the few occasions I’ve had to call. I wouldn’t trust them with banking though.

I love the phrase lipstick on a pig.

I’ve been warned for this Amazon return thing, I was ordering a lot and the sellers were shit. It bugged me quite a lot. I’m Prime so I pay for delivery, I expect decent service and goods and the ability to return as advertised

but some algorithm will decide you’re returning too much

I found the email, ignore the highlighting bits 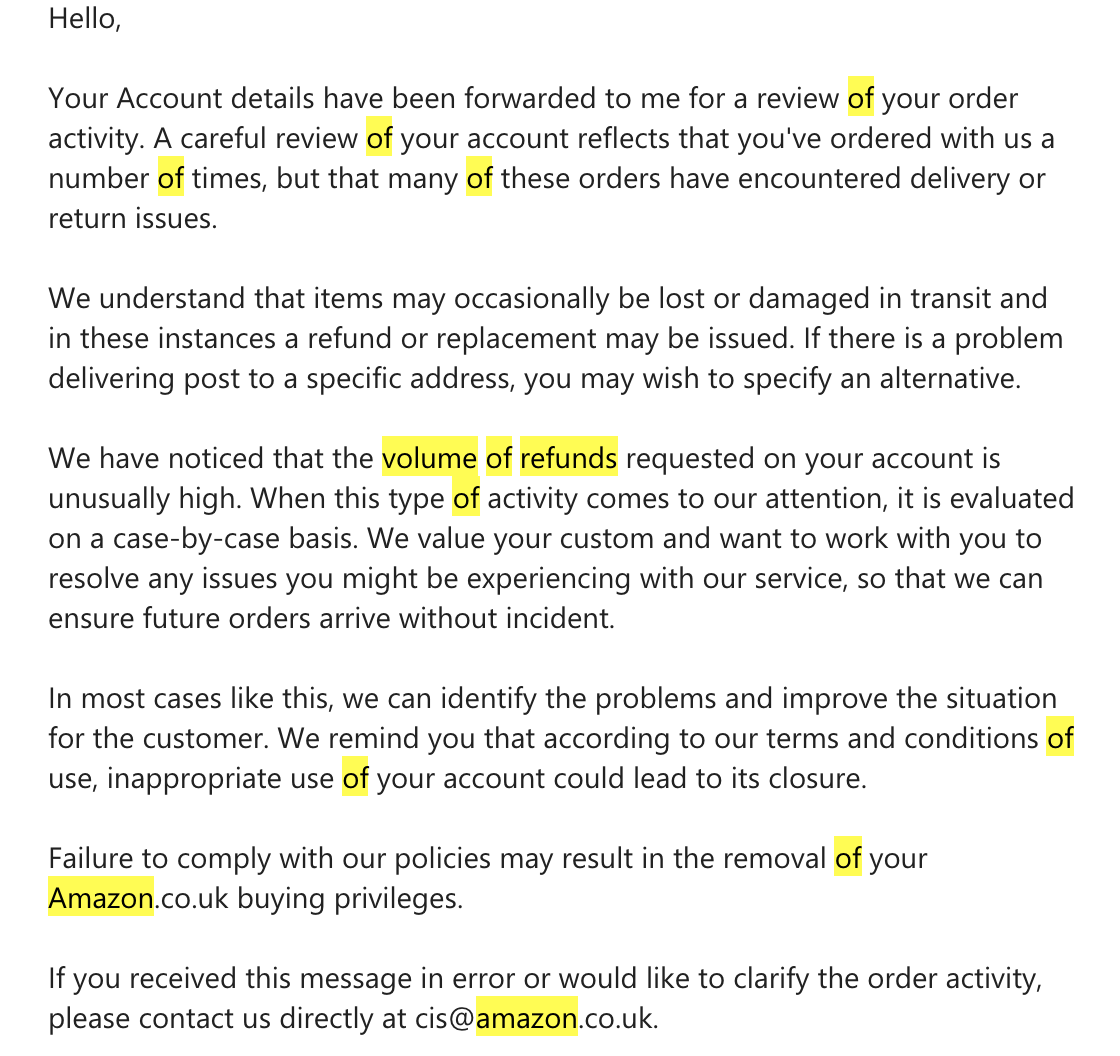 Had the exact same email back in 2015, replied and had a small thread form with Amazon. Nothing happened and I didn’t alerter my purchasing / returning behaviour drastically

I’m prime too. And frankly, if I don’t get what I’ve paid for it’s getting returned

That’s about as passively aggressive as it gets, isn’t it…

and someone I know has even collected a bunch of cosmetics, books, sex toys

I’ve never had a problem with Amazon, wouldn’t want to work for them, at all

but the service is amazing.

I’m sure some people have been banned for it though.

At least you got warned! Not everyone did.

Not really behaviour for a bank. It’s worth noting N26 did the same thing early on but they backed down on it and reopened accounts after public outrage. 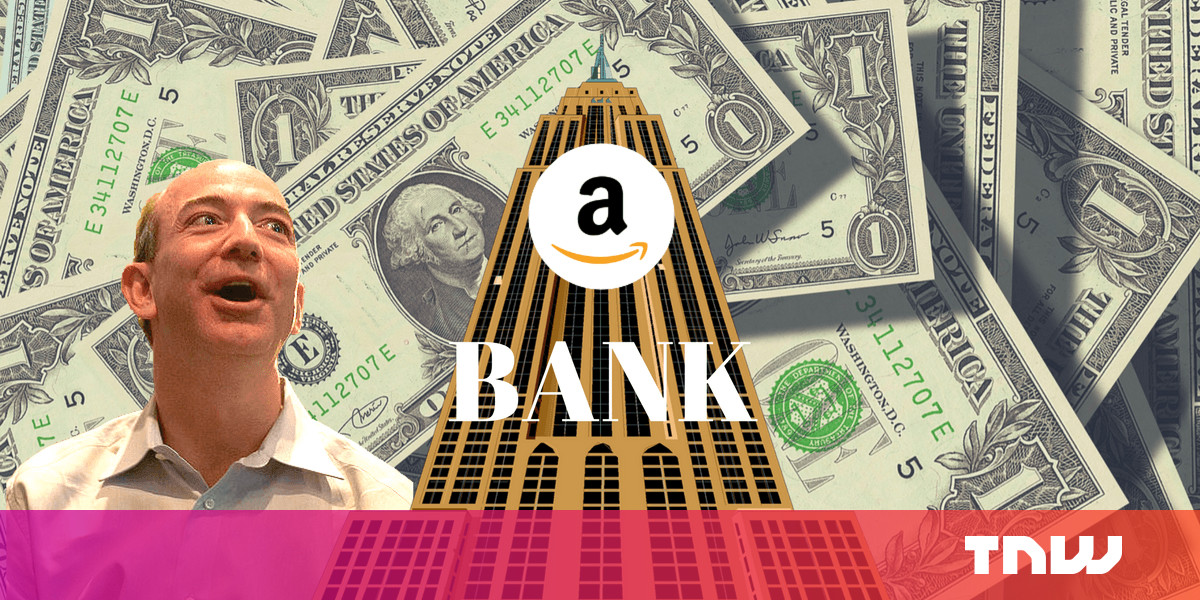 Opening a bank is a genius move for Amazon 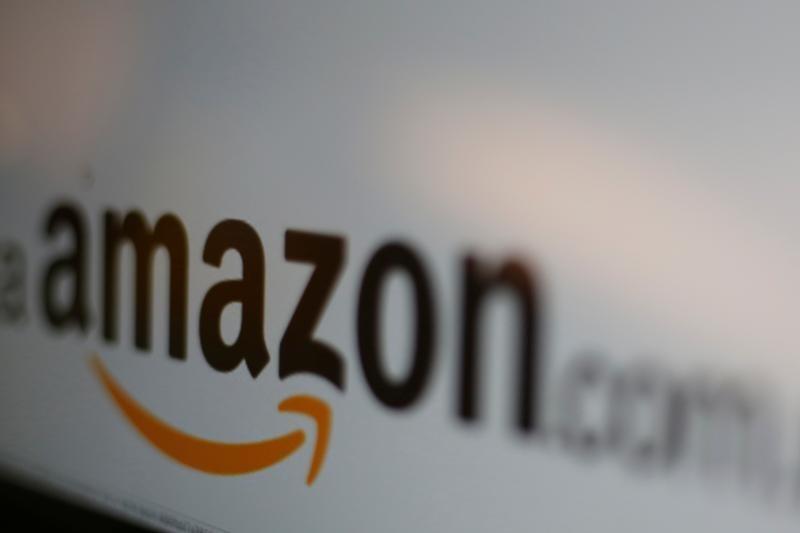 Amazon.com Inc launched its first-ever debit card on Tuesday in Mexico, part of ...

Serious - though maybe somewhat dumb - question: how is this a debit card? It sounds like a prepaid card to me…

Did you read the article?

That is basically what it is, but has nothing to do with credit.

They are using it as a bridge, for people who don’t have bank accounts in Mexico to be able to buy online.

Do you honestly believe that Amazon is going to stop at offering some crappy card for unbanked Mexicans?

There is a huge flaw in this statement. Read the article.

And you are underestimating the strength of Unbanked Mexicans