Why would I use this?

OK so color me a bit confused…

I signed up… Put a grand into the system and went to give it a trial run… In the first weeks I have had a few failed transactions, contactless doesnt work in some places, and its a (personal preference I guess) unappealing shocking pink thing…

But most of all… I dont see its purpose… I have no way to monitor my monthly spends, or category spends, or basically any real upside. Yes I can go into a payment and see a stores average spend, but thats all ?? Wheres the upside ??

My vanilla cards are my banks platinum cards, those have been my primary cards for almost 2 decades… Around those I cycle a bunch of cards, I have SE Asian bank cards for my life there, British airways visa cards to collect 3x avios / airmiles on my flights and collect points for actual savings… Whats the purpose of this card ??

Is it the fact I am using it on Android (Pixel XL) that it doesnt seem to have an upside ??

Is there going to be any kind of cashback, points, airmiles system in its future ??

Given I have had issues spending and authorizing with it, the need to load it, I struggle to see what it is fixing for me… What am I missing ??

I don’t think there are going to be any air miles or cash back in the future - sounds like you’d be best taking your grand off and keep on using your vanilla platinum cards. Android is getting updated to be on par with iPhone as fast as the Monzo team can do it, bearing in mind they didn’t even have any Android engineers until June ish this year, which isn’t really any excuse for the lack of features on Android, its just a fact - if you don’t want to wait for the updates thats up to you. You have your SE asian bank account so the free FX rates don’t really give you any benefit, presumably you don’t need to exchange either way when you have funds in both UK bank accounts & SE Asian accounts which is quite lucky, you are presumably quite happy to wait for any spending to appear on your account statements 2 or 3 days later so that again is another benefit of Monzo that you don’t really care whether you use or not.

If you holiday on the Costa del Sol where you get ripped on either your platinum bank card or SE Asian bank card there might be a benefit for you ? if you don’t there doesnt seem to be much point for you to keep using it

Oh I spent the grand off it already…

Yes I have bank accounts in all my primary currencys… GBP EUR USD and my Thai banks… Each has debit cards but frankly I only use THB for day to day there and 99% my GBP visas here. I actually issue my own prepaid mastercards in both EUR and GBP to all my contractors and employees as a system of paying them so hand out cards I administer myself too…

I just mean my regular cards give me stuff, points, avios, airmiles etc which equates to flights (which I need to take a lot of). This card has some negatives but I dont see any positives ??

I will try again when the app updates but I didnt realize they were developing for the 10% of phones sold not the 90% when I signed up. You cant see the app until after so I guess thats partly why I am only just finding out.

Flying to Thailand monday, will check how it functions a bit there and what ATM fees are like (usually non Thai cards pay a high fee).

Yes. Personally I thought that was crazy too.

Flying to Thailand monday, will check how it functions a bit there and what ATM fees are like

Sure… In general visa cards are not a primary way of spending money there… Merchants and eateries are not all visa enabled, and even if they are they often they add 3% to the final bill to cover the merchant card fees.

I will report how it operates for ATMs though and test it where I can.

Yes, the Android version is a little behind the iOS version but you can see on the roadmap that some features to make it more worth your while will be arriving in within the next few months, perhaps weeks.

As well all the features that you can discover on the roadmap and the brilliant FX currency exchange rates with no fees, Monzo is probably the most openly transparent bank ever. They work for the benefit of the users not just the investors who also happen to be users.

I have no way to monitor my monthly spends, or category spends

Is that because you need to use the card for a month before you can see the graph and targets?

will be able to help - is there an in app help button on the Android version?

that you can see before getting the card to work out if it is suitable for you.

Is that because you need to use the card for a month before you can see the graph and targets?

Really ?? See this is the kind of stuff theres no guide or explanation… Whats ‘targets’ ??

So what… after a month other stuff is visible in the android app ?

that you can see before getting the card to work out if it is suitable for you.

Here’s your guide to Targets 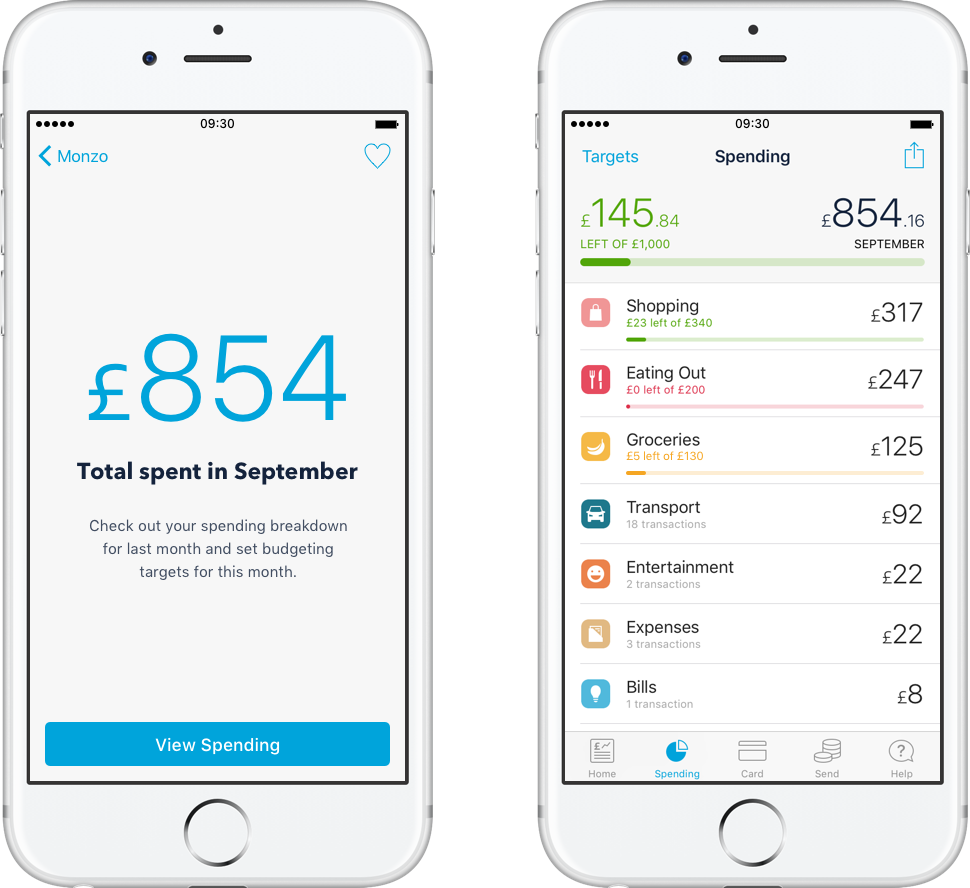 to Android. The next round of features are listed on the roadmap & Monzo will add the remaining features once those are released. As Ian said, Android will end up with the same set of features as iPhone in the end.

That’s alright, I’ve never had an Android phone so I wasn’t sure what you would see regarding the app in the equivalent place.

Will just keep my eye on it over time…

Not yet, make sure you join the beta program to get the new features first

To pick up on your point about documentation, the app is evolving so quickly that documentation becomes outdated quickly but the blog is the best place to go to find an explanation of each feature.

Failing that, you can always ask for help here (the regular users probably have the answers to your questions, having spent some time experimenting with the app).

That’s another feature that’s not yet on Android, but it will be very soon! Hopefully though @PhatPheddy won’t need to wait another month to see the pulse graph as it will already have a months worth, and more by then, of transactions in the timeline.

Let’s not forget that Monzo is in BETA and improvements will be made before you become too critical.

As others have stated Android is being developed to match iOS capability.

I wasnt trying to be too critical, I can see people obviously like it… I was just a bit baffled by why…

Now I know… The android app is the step child… I will just wait to see how that goes over time.

Consolidating my cards would be helpful…