“The rope” - depending on where the hand is, you either have a good grasp on the rope or you are letting it slip out of reach!

This is a good suggestion

The 2 new categories are… underwhelming. I’d hoped to see a bit more progress there, at least excluding categories which are not required by that user. Great to see at least some progress on this though, even if it is not things I’d personally use. Most people with families will have a joint account, something Monzo doesn’t offer, so for me family is not going to be very useful without that as spending goes on the joint card.

I love the new Personal Care category (it was much needed), and I can see how a Family category could be useful for people with … families. But I’m shocked and very disappointed there is no Gifts category—no category for marking transactions as something I purchased for someone else, whether it was a round in a bar or a specific gift for someone. I find myself buying little things for people every month (lunch, a beer, cakes for the office, or a little something I’ve seen that I think a friend would love) and it would be great to be able to track all of that in a category to manage and keep track of how much I’m spending on other people.

Considering that was missed out of these early designs, is that really not something many other people would find useful?

Everyone laughed at that! I thought a “dial” would work

But I’m shocked and very disappointed there is no Gifts category—no category for marking transactions as something I purchased for someone else, whether it was a round in a bar or a specific gift for someone.

I second this, would love this category.

Ultimately the notion of a finite set of fixed categories is flawed… not really sure why this still isn’t being addressed properly.

21 posts were merged into an existing topic: Custom Categories - 1

Without sounding harsh the video is hard to watch. I am sure it was a great experience in person. Could the designs be added to a post as an update to the previous sneak peak? Or even added to this one.

There was a suggestion earlier above if you employing an AV technician. This would be great

Really liking a lot of the potential updates on the presentation.

Just a quick question for the guys and some thoughts.

Expenses - When my employer pays my expenses, it would be good to have an ‘Exclude from Breakdown’ or ‘Mark as Returned Expense’ toggle for the income item and then I can remove both the initial spend and also the amount returned by work from my breakdown.

For split bills I think there’s two options, you could have a toggle which allows you to select the spending item in the feed that the repayment is linked to and then it will subtract the income item amount from that spending item.

Another option, which I prefer, would be for you to have a toggle on the spending item which allows you to either reduce the figure that goes into the spending tab to a fraction if you’ve split the bill (1/2, 1/3, 1/4 etc), or allows you to input the figure which you personally have spent - so say £30 has been spent overall on a joint shop with your mate and your mate owes you £10, you could press the toggle, input £20 for your personal spend and this then filters through into the correct category in the breakdown, removing the £10 that is owed. You would then have a toggle on the income item which allows you to exclude it from the breakdown so when your mate pays you back £10 you can remove it from the breakdown page and the repayment is only in your transaction feed and doesn’t affect the breakdown.

It solves the time issue, because as soon as you spend the money, you would be able to correct the amount in the breakdown and make sure the dial/‘thick line’ would have the correct colour. If you waited until the mate paid you back, the numbers would be incorrect until they had done so.

Hopefully this will include splitting cash withdrawals into other categories

The exclude from Breakdown/Mark as expense is an improvement, however it still doesn’t cover all scenarios as far as I can tell. For example if I paid for mine and a friend’s meal, then I’d only want to mark half of it as an expense.

An idea I had could be to mark transactions as being linked to others in a many-to-many relationship. A single incoming payment could be used to pay off one or more expenses. On the other side, an expense can be (partially) paid off by one or more incoming payments. If that didn’t make sense, then hopefully these examples will:

Example 1 You pay for dinner for yourself and two friends, costing £50 in total. Your friends pay you back £15 each. The remaining cost in your spending tab for that meal should be £20.

Example 2 You pay £20 for a train, and £15 on food. Your workplace pays you back £35 for the expenses. The remaining cost in your spending tab should be £0.

From a UI point of view you could maybe add a table to each transaction showing what other transactions (if available, placeholder if not) are used to offset it, and how much. I’ve attached a crude image showing the idea. In that example the spending tab would only show £11.61 for Yo Sushi. 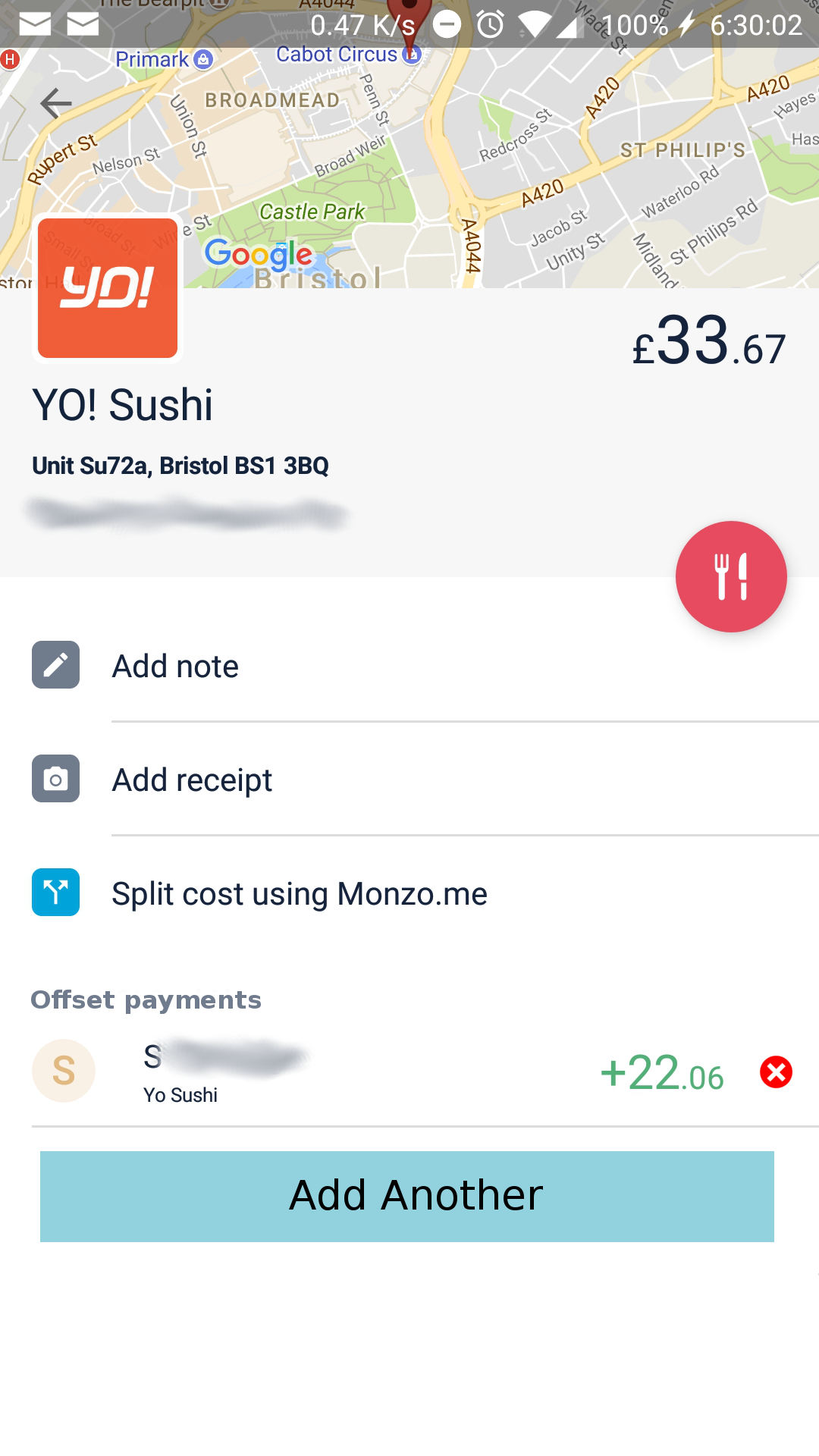 I know it’s probably quite an advanced feature, but it would be great for power users who want to meticulously track their spending.

I think a combination of our two ideas would work.

Example 1 - Say you’d paid £50 for the dinner at Yo Sushi and your mates owed you £15 each, on the transaction page for the spend you’d have a box saying ‘personal spend’ into which you’d input the amount you’d spent (£20). Once you’d inputted £20 as your personal spend, that would automatically generate a note saying £30 still owed. Until you’d offset the payment you could get a push notification every 7 days to let you know that you’re still owed money.

As it’s an eating out spend, in the spending data, once you’d inputted your personal spend, this would then remove £30 from the eating out total instantly. One positive would be that the spending data would be instantly correct, rather than waiting until your friends pay you back (which as we know could be a while!).

When the friends pay you back, you’d go into that income transaction, tick something like ‘exclude from breakdown’. The repayment wouldn’t then add to your total income for the month. You’d then offset the payment against the previous £50 spend item at Yo Sushi, by selecting that spending item in some sort of dropdown. If your mate is paying you back for multiple transactions, then you’d have the choice to pick more than one spend item and be allowed to allocate a certain amount to each. The offset in this example would simply be used to advise the app to stop sending push notifications that you are owed money, not for anything to do with the spending totals.

Example 2 - For expenses, you could have a ‘mark as expense’ button. Again, push notifications totalling the amount of owed expenses could be generated until repayment. Once repayment happens, you’d also mark that as an expense and offest the payment.

‘Mark as expense’ would just take it out of the spending totals but it could still be listed somewhere.

People who want to use Monzo to manage their money accurately need this kind of functionality and need to be allowed to manipulate the data so that it’s accurate. You wouldn’t be manipulating the transaction feed, just the output that feeds through to the new breakdown tools.

Thick Ring! Yes needs some thought on names.
As it’s a Dashboard, why not cash speedometer, cash speedo, cash rev counter, cash dial or something of that ilk.
You could make it look like a car speedo with two dials, second one broken into concentric rings, i.e. the spending categories with comparisons to previous months using RAG status to indicate a category pace compared to previous months. e.g. hitting the social life hard would show the eating out/entertainment categories hitting Red

Ah I see. So it’s effectively the same idea except without linking the transactions. I can certainly see that being a lot more user friendly. Just to clarify with an example, I presume it would go something like this:

Of course all of these would affect your spending tab as you would expect.

The only place I can see this getting confusing is when you owe, and/or multiple people owe you various amounts at the same time, but then that’s confusing anyway without a fancy app to help you.

When searching for similar functionality while building websites at work, I tend to search for ‘progress donut/arc’

How did you know? 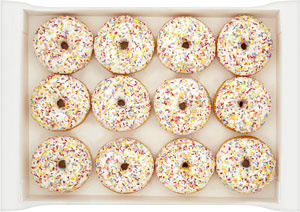 *Other donut shops are available

Sort of but I guess I was proposing linking transactions in some way too and I was suggesting marking a ‘personal spend’ rather than an amount owed (but I guess that is apples and oranges in some respect).

So I was thinking (as the basic example):

If a person is paying you back for two transaction, you’d be able to link the income to two different transactions and specify the amount being linked to each one.

Those with a nice cup of coffee

Not sure I agree with hiding what’s owed from spending. You’ve spent that money until it’s paid back. At the end of the month we could get weird scenarios where spending says you still have money but there is none in your account. Correct me if I’ve misunderstood your ideas there?

I’d personally like to see another visual que on the new spending dial representing where you would be if all your money owed was paid back.

Interms of how the app realises money is owed, I’d like to see the bill splitting feature get a lot smarter. When used it would be great if it automatically created a visual on the transaction page, like the example someone posted above, with the breakdown of the split bill and status of repayments. I don’t know if this is possible, but if a unique url on the request link we share could then tie incoming payments to that transaction and mark them as paid when we receive money back it would a very sophisticated system that’s easy for the end user.

Then a global view of all bill spit requests would be the icing on the cake.

I currently use Monzo, Pennies and Splitwise to manage my money. This kind of functionality would make Monzo the only app I need.

I like the concept of reverse targets. Could this tie into pots? If a user is on track for hitting their target, why wait until the end of the month to give them positive feedback? At any point you could say those savings have partly materialised, and transfer them to a special pot.

Here’s an example of how it could work:

Lets say you have a disposable income of £900 per 30 days, and want to save £90 of that. Per day, that’s a hard budget of £30, but you really need to spend below £27 to hit your target. If on day 1 you do spend £27 then you’re meeting your goal. £3 could be automatically transferred to your savings pot. At this point you can just forget about the £30 allocated to that day. Your progress donut should say you have £870 for the next 29 days, and you still need to maintain the same level of spending.

If you consistently miss your target, at some point spending your whole income will become inevitable. At this point you are eroding any savings you already built up, so maybe Monzo should empty that pot again and tell you off.