Help me find a Christmas costume! 🎄 🕺

Don’t buy Splatoon 3 lol. These guys always ruin what is one of the best features and it’s just gonna end up with Nintendo taking it away.

These guys always ruin what is one of the best features and it’s just gonna end up with Nintendo taking it away.

What feature is that? I’m not at all familiar with the game

It’s an art thing. Been around since the first game on Wii u where it was more prevalent. People’s art would should up in the actual game stages you play on as graffiti on walls and such. It got scaled back a bit in splatoon, and now in platoon 3 they’re not shown in the games at all, just the lobby, or when you click on people to view their gear.

the vast majority of the art in both splatoon 2 and 3 is furry art, and quite a few of the ones I saw in game were sexual, or had sexual innuendos or references, and one or two which were just outright explicit. Not really appropriate in an online family shooter game thats largely aimed at kids.

ETA an example of the feature. There’s a little postbox in the lobby you can go to to draw things using the switch’s touch screen and post them so they might show up in the people’s games as graffiti around the lobby area or above your Inkling’s head. if lots of people rate your drawing as Fresh it’ll show up in more people’s lobbies. 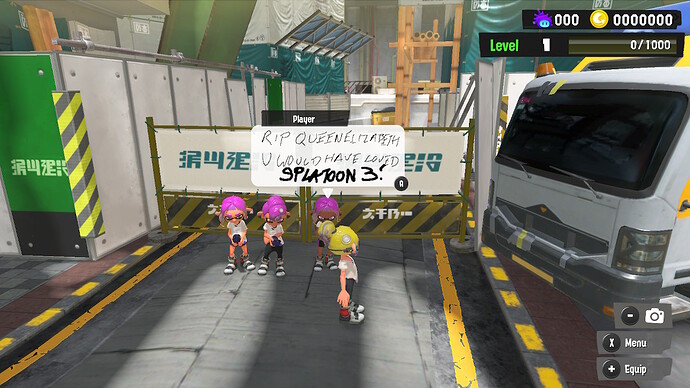 Splatoon 3 is finally out, and players are celebrating the queen's death and drawing crewmates from Among Us via the game's mailbox.

Great… why do people have to ruin nice things?

Have you ever used the internet before?

Great… why do people have to ruin nice things?

Anyone need a Christmas jumper though He’s left the penis, though.

Monzo all over that

no sexy turkeys for Christmas, ugly ones only