I got my codes from Turkey (on eneba).

I just can’t believe they haven’t shut down the loophole yet. Has to be a matter of time.

I don’t know what you mean, watching countdown until Thursday sounds perfectly reasonable to me.

PCIE is something like 7x faster for read / write than SATA.

I’m no expert in this area but I’d definitely say it should be noticeable day to day.

You can see the difference that PCIE4 makes in games like Rift Apart on PS5. The game mechanics would literally be impossible on earlier hardware.

Again though ‘7 times faster’ is just the sequential read write speed - only relevant to when you copy a large file between two drives at that speed.

Unless you are sitting there with a stopwatch you won’t notice any difference with things like game load times, eg Best SSD for Gaming: PCIe 4.0 vs 3.0 vs SATA vs HDD Load Time Battle - YouTube

You’ll find similar videos around for boot times etc but basically game load times and boot times don’t really have anything substantial to do with sequential read / write.

Does anyone have any experiences of signal boosting for wifi?

If I sit next to the router I get 70 Mbps on the wireless. Upstairs in my office, it’s down to 3 Mbps. Suddenly a house with solid walls isn’t so good!

I moved the router last night so it’s sort of below me and that got me back up again, but that was yesterday and today its super slow

Have you considered switching to a mesh system?

I have not, mainly because I don’t know what that is

We invested in a Google wifi kit, 3 hubs, basically turn your main supplied router into modem mode (ask your supplier how to do this) then Ethernet it into your first google wifi located nearby, then place the other two hubs around your house, creating a mesh network.

You then move between the three hubs seamlessly and have better connectivity all around the house, the furthest hub will of course receive the weakest signal ( hub 1 will speak to hub 2, and then hub 2 will speak to hub 3, so provide wifi).

Edit: depending on your current setup and router, you could split your 2ghz and 5ghz networks within the settings and try connect to the 5ghz directly as this may increase speed.

I wouldn’t use any phone line extenders or similar as they can ruin your end speed, may also be worth checking for contention on the line if you’ve noted it’s happening different times of day.

This is not what mesh wifi is but I’ll leave the technical explanation to someone who can do a better job explaining it.

Somewhat, but it doesn’t extend the wifi, it creates a wide area network.

It’s the standard Sky one, but the newest one.

Upstairs last night I got a good speed when I moved the router, which is what I don’t understand.

If you’re flipping between spaces and you’re on auto 2gz/5ghz which is most likely with the sky hub (loved ours), you can separate and connect to 5ghz / 2ghz and see if that works better?

On auto, it can pick and choose and sometimes won’t go for the best once it’s hooked on one so this might be what’s happening.

Failing that, mesh could work, Sky may also have something similar, like those additional box things they have (not sure if need be a tv customer though)

Have you got any DIY on the cards, I’d be tempted to put some cabling into the walls to various rooms. If not then you could always go with powerline adaptors or mesh systems like mentioned already.

If you can wait a few months for Prime Day, they always have Eeros on sale. 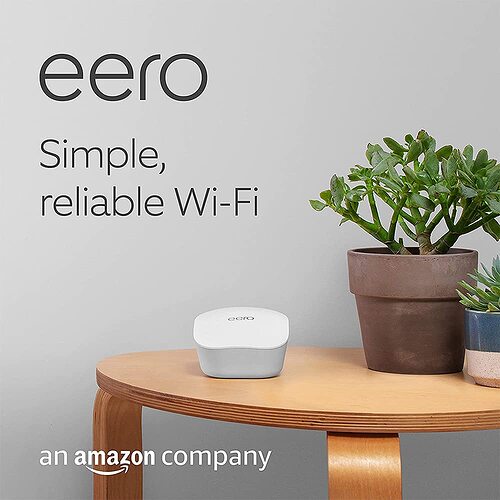 Like @Carlo1460, I also have Google WiFi (which works great). But I know you’re not their biggest fan!

I’ll buy something today, I want it live and kicking ASAP Rocky. Currently there’s a cable going out my office door, half down the stairs, across the hallway at chest height and then through the lounge, not sustainable

Going to try and figure out the 2/5ghz like @Carlo1460 suggested and see if that helps.

I’ll buy something today, I want it live and kicking ASAP Rocky. Currently there’s a cable going out my office door, half down the stairs, acros

You can’t go wrong with either.

I have one unit in my living room on the ground floor and a second in my bedroom on the first floor.

I work on WiFi in the loft and am getting 50+ Mb from my 350Mb connection.

Mesh all the way.

Also have clovr system which is Wi-Fi 6.

Whatever mesh you go through, it is night and day better than any supplied ISP router which belongs in the bin.

You like Apple so you might prefer Eero or Amplifi to Google’s. Both feel like systems Apple would have made, and ex-Apple engineers were involved in their creation, amplifi more so than Eero.

The one mark against Eero for me is their Amazon ownership, but a big pro for them, which you might appreciate, is their HomeKit integration.

Amplifi on the other hand is the consumer brand from Ubiquiti, and is very good. Amplifi alien is well liked that I see a lot in the homes of tech folks on YouTube. Not cheap though.

The technical differences have been covered in other threads, so I won’t rehash them, but generally you want to be meshing as opposed to extending.

Linksys Velop are another good option. Apple sell these themselves, so it’s a system they stand behind, if that’s something that matters to you. They used to sell Eero too, and not sure why they stopped.

There’s more and possibly better options if you delve into the prosumer/SME hardware like Aruba or Unifi, but I’m hesitant to recommend those to you here.

You can also set a priority device with google so it’ll be sure the connection is top notch for a set time, think it’s 8 hours but I’ve not had to use it.