Watching Person of Interest again, it’s been 12 years since I’ve last seen it 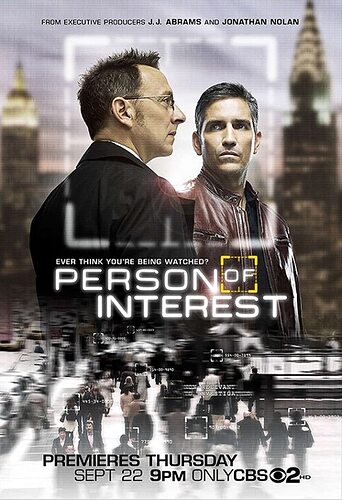 Person of Interest: Created by Jonathan Nolan. With Jim Caviezel, Kevin Chapman, Michael Emerson, Amy Acker. An ex-CIA agent and a wealthy programmer save lives via a surveillance AI that sends them the identities of civilians involved in impending...

I’ve seen all but the final season

If you’re watching it on Alibi, I’m waiting for them to get there so I can pick it up then (if I had more time I’d rewatch the whole thing, but).

Its epic! I love it!

Fringe is also a regular I like to watch.

Jonathan Nolan is also doing the new Fall Out series and I actually liked The Peripheral which he produced even if the 2 leads were not the best of the best, I did find the other characters interesting though.

Fringe is also a regular I like to watch

Oh I’d forgotten about this, I’m adding it to the list to watch again

Jonathan Nolan is also doing the new Fall Out series and I actually liked The Peripheral which he produced even if the 2 leads were not the best of the best, I did find the other characters interesting though.

I quite like Chloe G M. Have a soft spot for her from Kick Ass!

I quite like Chloe G M. Have a soft spot for her from Kick Ass!

I dont mind her too much, I just find her a bit wooden although I think she is better than some of her recent work in The Peripheral.
I did love Kick Ass as well

I’ve seen all but the final season

Just noticed Freevee has all the series on it, so if you can download the app, you’ll be able to watch the final season on that.

Still my favourite show of all time. Only tv show I went and bought all the episodes for on iTunes.

Needed to watch something dumb as my brains overworked today. So I watched one episode of Bad Education, now I feel like my brains have been liquidised and poured back into my head. It’s bad… Epically bad

Another night of watching something dumb… The Apprentice, at least I don’t need any brain cells firing to work anything out with this show.

I’m glad it works for you, but I can’t watch the Apprentice any more as I find it aneurysm-inducing

The second episode of The Last of Us. The videogame roots are much more apparent this time (what’s that? The easy route to a destination is blocked? So we now have to travel a more difficult and dangerous path?). But it was still bloody good, so I forgive it.

How To with John Wilson. It’s like a Nathan Fielder show but even better. If none of that means anything to you, I’m sorry. And also, watch this show.

Mrs Fletcher. I’d like to say this fills the gap left since I finished Minx, but it predates that show and has also been cancelled. Boo.

The second episode of The Last of Us.

I think I saw an advertisement for it earlier

looks good from what I saw.

When those clickers showed up

Probably the best game to TV show moment I ever seen. Loved it!

I need to catch up with The Last of Us, but I’m curious to know how they’re going to approach the TV adaptation of God of War. Now that one is going to be a challenge to adapt.

Finished The Peripheral. Ultimately I’d give it a thumbs down. Wasn’t terrible but just fairly mediocre.

Halfway through the first episode of 1899. Heard good things but I’m not that engaged yet. Is it worth sticking with?

I don’t care here or there that it’s been cancelled if what there is is high quality.

Tried watching this and got bored very fast first ep. Glad it wasn’t worth holding out on

Halfway through the first episode of 1899. Heard good things but I’m not that engaged yet. Is it worth sticking with?

Given that it’s been axed, it depends whether you would be angered/frustrated by an incomplete storyline

Has anybody watched Our Flag Means Death? Extremely good, I thought. Stark-raving bonkers, but then again this is from the guy that brought us People of Earth.

As for The Apprentice: when is Lord Sugar going to task these fools to find a schimogel(*) at a reasonable price? That’ll keep them on their toes, or drive them to the point of resigning.

Decided to ditch 1899 and started Treason instead. Much more engaging, right from the start.

Anyone else watching the masked singer this year?