as the fees are calculated as a percentage of the top-up amount. So the more you top-up, the more expensive it is for us!

This makes me feel a lot better.
Sometimes I would add money in an emergency but when there was a push to use back transfers I felt guilty every time and kept it to the lowest amount possible.

Now that I’m #fullmonzo it isn’t happening much anyway.

It makes a lot of sense to remove this feature, you know, like a real bank…

I’d just remove the feature for everyone after a decent amount of notice.

It is probably the easiest way to add money to your account. However, it just encourages people to use it like a prepaid card which just seems like a pointless and needlessly complex thing to do now. You’re also not making any use of some of the current features or planned features.

If you still want to use it like a prepaid you should just setup a standing order.

It would be interesting to hear from some of the people who use it frequently - but I imagine it’s just the convenience of staying in app.

Totally fine with this, don’t see why youd need it when you have FPI, lol.

I wasn’t aware there was already an overall limit to Monzo.me and card top ups for original users. They are quite high anyway: 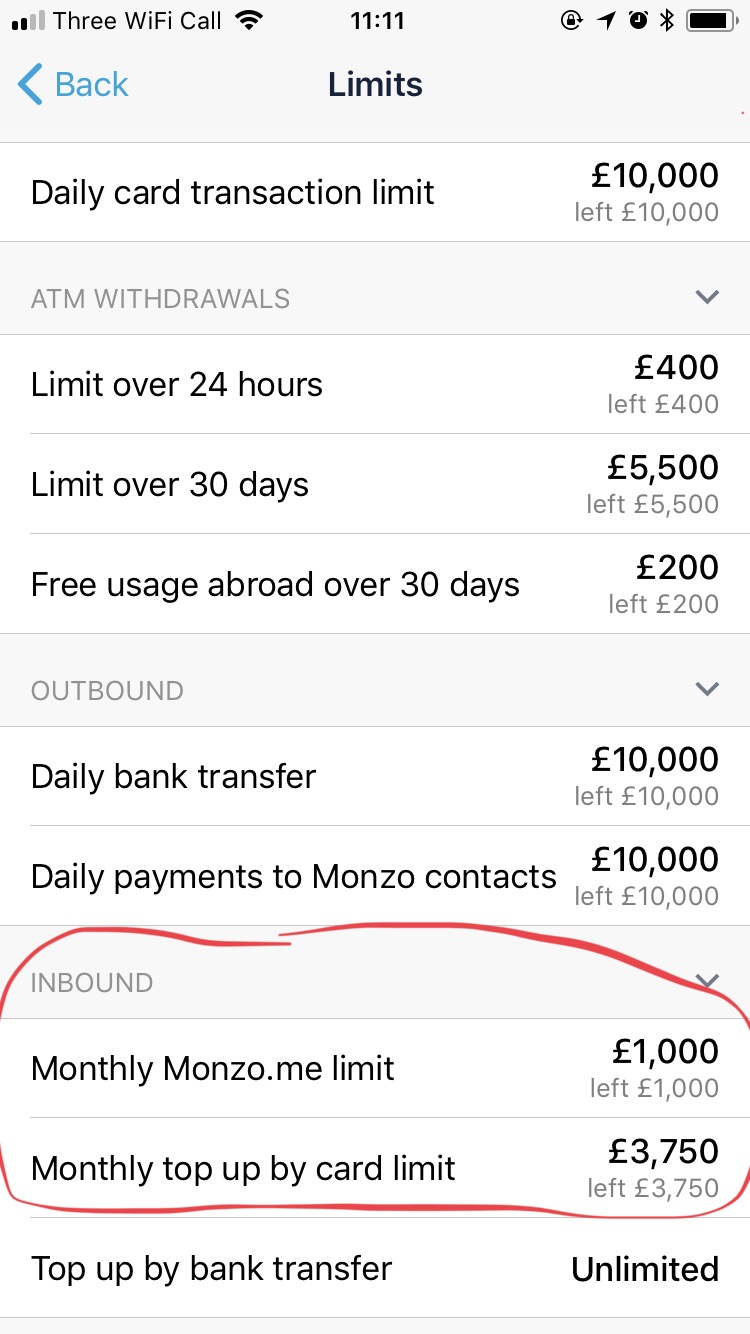 I don’t often use it but I’d like it to be there as a backup, maybe with a smaller limit than currently.

I see there being three things here: being open and honest with the majority of users who don’t hang out in the community and who aren’t responding to the nudges in the app; secondly creating different solutions to card top-ups; and thirdly hastening the process of getting users to adopt Monzo as their main account.

We don’t currently have plans to remove debit card top-ups for old users either.

I’d love to hear from the community - how do think we should do this?

Just turn it off for all users.

You’ll probably get some push back, but in reality it doesn’t take long to set up Monzo as a payee in your legacy bank (that users are topping up from) and wire money like users are already wiring money between bank accounts (assuming they don’t want to put salaries in for whatever reason).

Those users can’t really argue with the rationale given it’s about making Monzo sustainable and the alternatives aren’t exactly burdensome.

don’t see why youd need it when you have FPI

Do you mean API or FPS ?

I think this would be a nice option to have too.
But are there any costs (over and above standard bank transfers) associated with transfers handled this way?

I’ve seen Tom’s (CEO) commment, and i said before his comment - I just don’t understand why they just don’t turn the feature off completely.

I get some still use it, but from a company point of view, if it’s costing money get rid. Some people - a small % - will kick back - but you can’t please everyone all the time - they will come around and see sense when it’s settled down.

“See sense when it’s settled down”

Probably the exact opposite of the attitude they want to portray

When I said that, I meant in regards to why they ‘stopped’ top-ups. As when any company stops anything, the pitch folk brigade comes out, but give it a few days and it all settles down and they understand why it was turned off or stopped.

An example, is when Apple stop allowing older iPhones the latest iOS, people getting angry at first, but give it a few days - it all settles down and the people moaning go out and get the newer iPhone to get the newer iOS.

What about asking people to opt-in if they want to keep it? People who actually need it could retain it, but it’d prompt other people to reflect on whether they could use other methods.

They got a ton of pushback on here for the mere suggestion in the app people use transfers instead of topup, I imagine they want to avoid a repeat.

I’m inclined to agree - But it depends how many of the 150,000 don’t have another legitimate option.

It’s not quite the same as a new iPhone not getting the latest software - If you have no access to your bank account, or rather, no way to add money to it, it could be catastrophic.

In my eyes, it’s a significant cost (which is the whole reason it is being raised in the first place due to the sustainability of Monzo) and there is not a significant enough reason for users to need to be able to use top-ups.

By association, they are topping up from another bank account, therefore there is no reason they cannot transfer from that same bank account as opposed to top up.

Yes it’s (slightly) more friction, but that’s not Monzo’s fault, and Monzo shouldn’t have to subsidise that.