"These countries have the highest minimum wages" 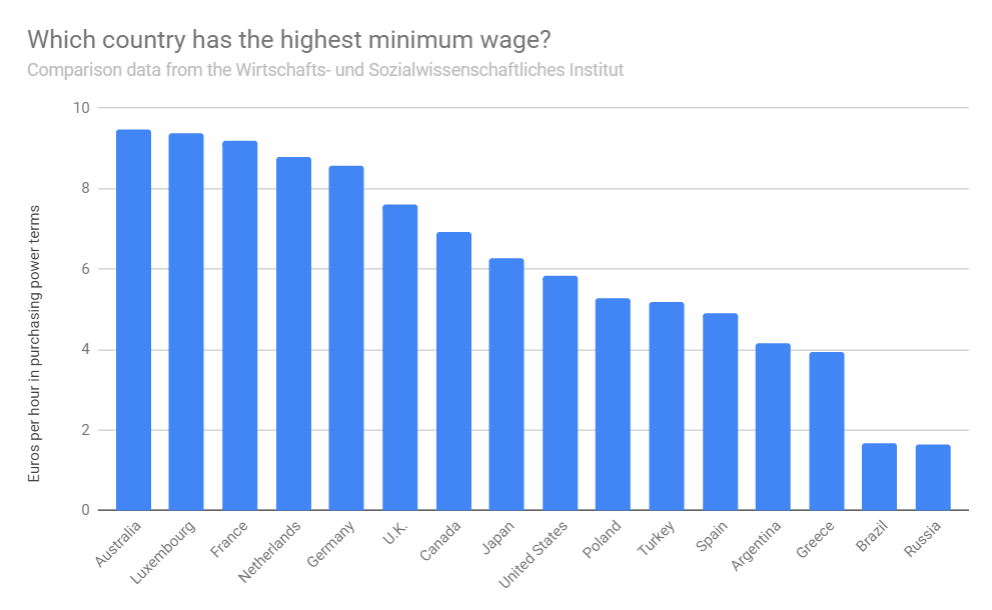 These countries have the highest minimum wages

The hourly rate in Australia yields the equivalent of €9.47 ($10.78) of purchasing power, almost six times that of Russia’s.

Interesting article and data showing minimum wages across the world, and particularly through Europe.

How does this compare to cost of living in each country?

Would be an interesting comparison.

I’ve been researching moving to Sydney recently and have concluded that cost of living is near identical to here (Oxford). I think the only areas that can be more expensive are car ownership (but fuel is considerably cheaper so counteracts this) and alcohol.

How does this compare to cost of living in each country

Agreed. Comparing minimum wages is useless without comparing living costs. I’ve heard Australia can be expensive for some things so it stands to reason they have a higher minimum wage.

Surprised some of the Nordic nations have no minimum wage though.

I used to live in Denmark and actually it’s not that simple. To be honest I’d say it was a bit lazy to leave Denmark off the data set. As although officially they have no minimum wage there is industry specific minimum wages. These differ between different industries.

Doesn’t look like they spent much time looking at Canada, according to that chart, it’s below the UK but in some provinces, the minimum wage is above the UK (including two of Canada more populated provinces, Ontario and Alberta, which together are more than half the population)

Possibly an average based on land area rather than population? But I agree that doesn’t compute.