Feels odd that they’ve updated the look of Summary… When it’s meant to be on its way out?

Yeah, especially with no updates to trends since its introduction, not even basic stuff like custom periods… (and by basic I mean an obvious, simple, clearly necessary feature - no knowledge or judgment on development ease!)

Saying that, I suppose maybe there are still two separate teams right now? And this is only a little UI update.

But certainly unexpected to see summary being updated but nothing for trends.

Anyone willing to share a screenshot of the summary update?

I imagine it just looks a lot more like Trends with the same sort of UI elements now?

This is what mine looks like. Cropped of course!

Almost fully there with this UI then! Just a few finishing touches needed in some areas, and the big one: the feed. Gotta be close to completion now though, surely.

I suspect, once the app has fully transitioned to this new modern look, we’ll see dark mode drop, as it’ll be this interface they’ll be designing it for, not the old one that’s being phased out.

When it’s meant to be on its way out?

I think Trends is a much longer term project and will take a lot of time before it can replace summary.

Trends - a big update to the Monzo experience

Some of you might be wondering what’s going to happen to Summary amidst all of this and I want to reassure you that it’s not going anywhere for the foreseeable future. We know lots of you rely on it and whilst longer-term we see Trends replacing it, that won’t happen until Trends has caught up with what Summary does (and a whole lot more

and the big one: the feed.

What’s wrong with the feed? I highly doubt they’re going to update that look at match, it wouldn’t work right inside the tray that the data sits in, I’d be pretty certain that the feed is an intentional design decision

There’s nothing wrong with it per se! It’s just a totally different design language, so it’s out of place with the new look that’s used everywhere else in the app.

They could arguable get away with leaving it alone though. It still works with their new UI, it’s just not as conformative as it could be.

It will have been an intentional design decision when it was designed alongside the older look of the app years ago. But I don’t know if you’ve noticed, over the past year and a bit, Monzo have been gradually redesigning the app one screen at a time. The feed is the only one they’ve not touched as yet.

If they do update I suspect it’ll look similar to the manage tab, with the inner boxes being separated by date. And the dates adopting the style of headings used there, and everywhere else in the app too.

Essentially, just take a look at how they’re presenting your transactions inside trends, and that’s what I think the feed will wind up looking like.

So. I think you’ve mentioned the feed before re the new UI.

And I’m with @Addzy in thinking it should stay as it is actually.

Like. The amex one (which I think is bad overall, and clearly a lot more pronounced than what Monzo are doing in the other areas of the app) is very weird. 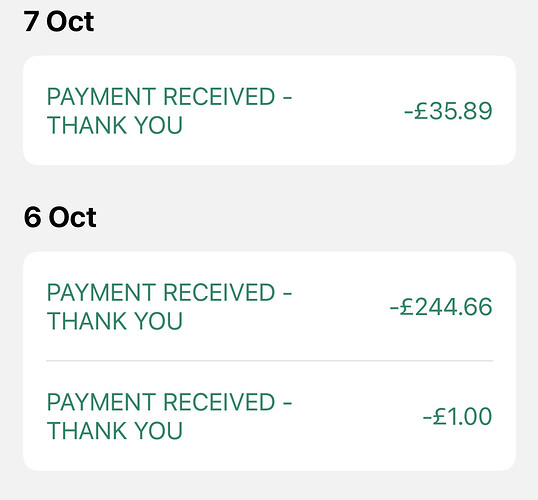 And thinking about monzo and feeds generally (e.g. Twitter), this is definitely an area where I would favour information density over anything else. Edit to add: maybe information density could be kept, but I think there’s something to be said for fewer elements and clear breaks. The current blank white background doesn’t require any attention paid to it and I can just focus on the feed.

As you say though, could very easily look like trends or the manage tab, and ovi it is now the only part of the app that doesn’t conform. But I hope it stays as it is/not very different tbh.

Yep, but I assumed that meant it would just remain static until Trends catches up. It feels odd to invest development into a time limited area of the app - unless, of course, it reduces technical debt or otherwise serves a greater purpose.

Might be custom UI code that they’re removing as it’s buggy in summary or allows better reuse of other code by shifting etc.

It’ll be this, yes. It’s a very simple change, as drastic as it might look. I suspect the core reason for applying the new layout to this feature will just be dark mode. Much easier to develop and test when you have a consistent and uniform UI with reused elements and structure.

The amex one (which I think is bad overall, and clearly a lot more pronounced than what Monzo are doing in the other areas of the app) is very weird.

This is exactly where I think it’s going to go, for better or worse. Though perhaps they’ll be a little more compact and space efficient.

Dense information is great and all, but I don’t think it’s always the best choice. Sometimes clear spacing and separation are equally as important as it aids you in finding what you’re looking at for, and improves glance ability of that.

I think I’m in the camp that favours a better spaced out list over a more dense one. Worth noting though, that the two things aren’t mutually exclusive. You can find a really nice balance that does both very well. iOS settings app does that well.

I’d hope they’d think about the screen as a whole if it came to that. We know the blue buttons are (meant to be) going away - and I’m not sure the card carousel makes as much sense as it once did…

I use the carousel all the time.

Anyway, we’re probably a bit off topic. @N26throwaway, you’ve mentioned a redesigned home screen a few times - do you want to do the honours on creating a dedicated topic?

Pulling down to get to the list is just so much more efficient though!

The carousel is just a boredom buster for me now!

Yes, I open on the monzo and swipe through my pots when I’m bored. Doesn’t everyone? 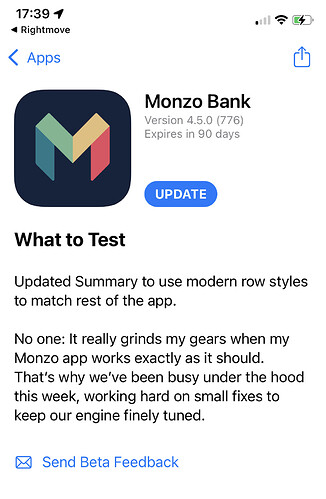 Was just about to come here to ask if anyone else just received the notification a second time!

Now I know it’s not just me!

Incidentally, how do you get on the beta program?

I’ve never used TestFlight - is it like a cut-down App Store for beta versions?