MasterCard don’t inform us of offline transactions until the next business day, which is why I’m saying we’d prefer if they stayed online. Sorry if I confused things a bit.

We’re doing all the notifications etc asynchronously. In fact, much of the transaction processing on our end happens asynchronously so we can still accept payments even if part of our system is down.

Its worth noting for anyone reading down to here in the thread, that upstream from us, we are only given 400ms (0.4 seconds) to respond. The party upstream from us also initiates a new TLS connection for each transaction.
We actually had a day 0 issue where TLS round trip negotiation was waiting 240ms because linux likes to buffer up packets, which pushed us over our (then) 200ms timeout.
We’ve since fixed it so we have 400ms and our TLS is taking 50-80 (if i remember rightly).
In any case, tiny numbers compared to the 9-10 seconds it takes a terminal in the shop to “go online” and send the payment to the merchants bank.

Hopefully once you can dump the upstream provider and handle messages from the card network directly, this might improve a bit.

Thanks @alexbilbie! As @oliver mentioned we do as much as we possibly can do asynchronously so that our response time is within the extremely short timeout our upstream providers give us.

For anyone interested I talked a little about this at a more recent talk at Yow! and gave a slightly fictitious example of how we can move a lot of things (including notifications, merchant enrichment, webhook delivery) out of the synchronous response to the card networks as shown in this web sequence diagram: 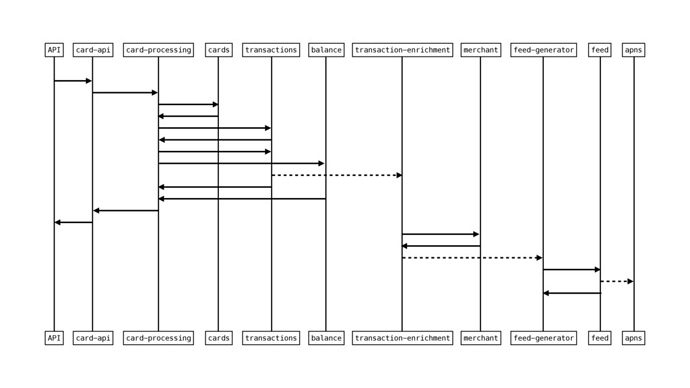 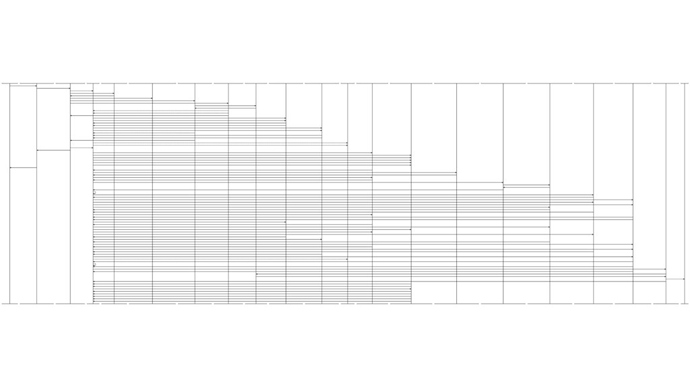 I just timed Silvios (our fave sandwich shop next to mondo towers.) It took 8 seconds for the terminal to get to “Transmitting”. Hopefully as more of the worlds cards switch to online, the chance that the terminal is offline will decrease (terminals stay connected for a few minutes incase the next customer is an online txn as well.)

Yes merchants who use the dial up machine (why they still exist!?!) are slow whatever the card.

But merchants using online systems like supermarkets, high street retailers, get a long wait to get the transaction on Mondo cards only.

I don’t think this is Mondos tech, but the upstream card issuer perhaps.

The delay doesn’t exist on my normal NatWest debit card.

The delay is making me reconsider using Mondo. I don’t like the awkward wait at the till when everyone else is just touch and go. The sales associate scrutinises the card on many occasion because it takes an unusual amount of time.

Hey @_sam, is this contactless or chip and PIN?

I use contactless nearly always. I can’t recall if PIN transactions are affected, I’ll try next time and let you know.

In Itsu the sales associate next to me served and completed the payment of another customer in the entire time it took just to process my Mondo card.

Ah OK. So with contactless, as @billinghamj and others noted above, this is because all of our transactions go ‘online’ (which allows you to get things like immediate purchase notifications). There’s not much we can do about this without giving up on instant payment notifications etc.

It also really depends on the speed of the retailers’ internet connection as you mentioned. Hopefully over time this will get faster as retailers get faster connections and more transactions are online (for example, Apple Pay do the same thing we do). Hope that makes it clearer! With chip & PIN, most cards tend to go online so there shouldn’t be any difference between us and them normally.

Been seeing this issue quite a lot recently, but reading through this thread that’s probably just a coincidence of using a lot of dial-up using merchants.

I don’t have an Apple Pay device, but I’m surprised to hear that they have the same issue (especially as most shop people seem quite weirded out by the delay of my Mondo card). Has anyone compared the response times of Apple Pay vs Mondo yet?

(especially as most shop people seem quite weirded out by the delay of my Mondo card). Has anyone compared the response times of Apple Pay vs Mondo yet?

One thing worth considering when comparing the two:

Apple Pay is very obviously different, so when something is unusual (e.g. slow) or doesn’t work, people aren’t particularly surprised.

Whereas Mondo looks like a normal card, but acts noticeably differently, which is not expected - thus drawing more attention to it.

Still would be worth comparing them though I reckon, because if Apple turns out to be a bit quicker, they might be doing something that Mondo could copy

I started to used more often the card this week in the same places I’m used to shop. The touchless is very slow indeed compared with Visa, usually ~3s while Visa take less than one second. I’m not sure if this issue is something related with MasterCard?

It’s because Mondo cards require that the terminal connects to the Mondo servers (so you can get a notification), whereas most cards don’t bother and stay offline. The card network is not relevant here.

Could it be a setting/choice that customers can make?

Following up on this thread from January, I’ve been using my Mondo Beta card for a few weeks now & have definitely found that contactless is noticeably slower. When I was ordering lunch today at a nearby cafe, the waitress made a point of saying that Mondo cards always take longer to process payments than other cards.

Admittedly this isn’t always the case, but for most transactions it takes a few seconds to go through - I’ve even found that the payment has failed to go through on a couple of occasions. This isn’t a major issue and I understand from earlier comments that this is due to the transactions having to go ‘online’. However, I feel it’s worth raising again, especially in case there’s anything that can be done

i thought it was slower because its a pre-paid card. but the instant push notifications are good and i wouldn’t want to lose this for a couple of seconds speed at the counter.

i have an idea. use those few seconds to smile at the cashier and ask how her day is going? all this tech and we miss the face-face interactions, poor guys at the counter must feel like robots!

With smaller merchants, especially ones that use dial-up, the delay can be annoying… but as more people switch to things like Apple Pay, and Samsung/Android pay, and Monzo you can expect that more terminals will be online more often, and the delays should largely be a thing of the past.

The advantages for online cards (fraud blocking, instant notification, up to date balances etc) totally out weigh the downsides IMHO…