Literally this. I’ve got a decent TV panel and a Google TV dongle plugged into the back. It’s way better than some mid level offering from Sky

+1 for Google TV. Best thing I ever bought. All the on demand comes cheaper than Sky or Virgin any day, plus no tv licence

Top of the league if picture quality is your only deciding metric.

if picture quality is your only deciding metric.

The sound is excellent, too, and that’s with the LG’s built-in speakers.

It pretty much is.

I’ll improve the sound of any TV and I don’t care about the inbuilt software because I won’t use it.

Top of the league if picture quality is your only deciding metric.

Given that it’s the one thing that can’t be improved at all, let alone significantly, after the fact….

Given that it’s the one thing that can’t be improved at all, let alone significantly, after the fact….

I get what you’re saying, but still disagree. It’s about the whole package, and I think how the TV looks is a big part of it. If you don’t mind paying extra for a soundbar or mind the look of them, then fair enough. I went for The Frame, and you can’t really retrofit an LG to be similar to that. I also don’t think there’s much you can do about the UI or connectivity.

Sure it can! You’d just buy a new TV, like you would new speakers

I’m half surprised you folks here haven’t gone all the way with a full projection based home theatre room like my cousin has. It’s like a tiny vue, and probably cost more than his car, but it is enviable.

Everyone else I know literally just have the TV, with their only other equipment being the boxes they plug in for the content.

I initially looked into Sky Glass before Christmas as my aging 4K LG TV did not have any sort of HDR, and WebOS was no longer being supported (ruddy smart TVs are, potentially, a security risk if something were to get in on your home network and the TV manufacturer is at fault for not patching their TV operating system - the smarter the TV, the greater the risk in my view).

I thought I’d place an order, but cancelled after a while because it wasn’t a full array LED display and only had three HDMI ports - none of them 2.1 capable. I eventually settled for a Sony Bravia KD-55XH90/P which does support HDMI 2.1 (and comes with 4 HDMI ports). It also supports HDR10, HLG and Dolby Vision HDR, as well as Dolby Atmos. What I also liked was it also supports Bluetooth headphones - something that comes in handy whenever next door’s dog goes mental. The downside is that it is Android TV and not the later Google TV. Sony didn’t say whether it’ll support Google TV later on, but for now it’s sufficient.

The thing only cost £725 on special offer via Amazon - split into monthly payments. Sure, I still need to pay my existing Sky Q contract, but at least if the Sky Q box breaks down, I don’t need to replace the whole TV. Sky Q and its HDR look flipping great on it too. The only fiddly thing was turning off all the motion smoothing modes and testing everything with the Apple TV 4K. Got them in the end, though.

Just a quick question about Sky Glass and the ‘includes Netflix’ thing with it.

Looking at their website, at the moment they’re offering Sky Glass with 3 months free Sky TV including Netflix. The terms they say with the offer is:

They also say that Sky TV is a 31 day contract for Sky. So, presumably that’ll mean you could cancel Sky TV and just pay £13 per month just for the TV anyway? How ‘dead’ is the TV without the Sky TV sub? Does all the other apps work?

Anyone know what ‘package’ you get on Netflix included? Is it a specific ‘Sky Glass’ package which limits where you can use it (only on that specific TV?). Do you get the ‘Premium’ Netflix sub included (which is the only one that includes 4k so would seem silly to not get the 4k sub on your new 4k TV?)

With Netflix + NowTV I’m already paying £25 per month (£15.99 for the top Netflix sub + £10 with Now (although this is with a retention deal for both Cinema and Entertainment for £10 in total).

I’m in a rented property so the landlord won’t allow a dish (or, in fact, even a TV aerial - everything I current watch is via streaming) so Sky Glass is currently the only option to get Sky (I know there’s rumours of a ‘standalone’ streaming puck coming but there’s nothing concrete about that coming anytime soon).

It seems it is the basic Netflixnsubscription that is included but you can pay extra for the upgrades (but this is just from a quick search in google. Im not 100% certain).

From what I researched before, a lot of the apps still work after cancellation as long as you activated Sky on it at some point whereas if you just bought the tv and no sky package it’s pretty dumb and none of it works.

We’ve been really contemplating Glass for a while this week but this week decided to stick with Sky Q, the main reason for anyone interested is that for any recordaholic like my fiancee, I don’t think the Playlist functionality of the Glass seems to come even close to live recordings on the Q. Also decided that the tv was just a bit too chunky, so we’ve settled on a last year Samsung and a soundbar, possibly a Sonos Ray or Beam 3. With a Ray we should hopefully have spent about the same(maybe less) in total but hopefully have a better picture and possibly sound.

Not a huge fan of Samsung but the picture quality of what we’ve bought is supposedly fantastic for the price with just the sound lacking. As we use Sky Q which has all the apps nowadays, the smart tv os was not important, if you could buy a dumb tv then I would have.

As we use Sky Q which has all the apps nowadays, the smart tv os was not important

I’m not that impressed with the Sky Q apps - the WebOS apps with my LG OLED give a better picture quality. My 4K Apple TV is the best, though.

Here seemed as good a place to drop this 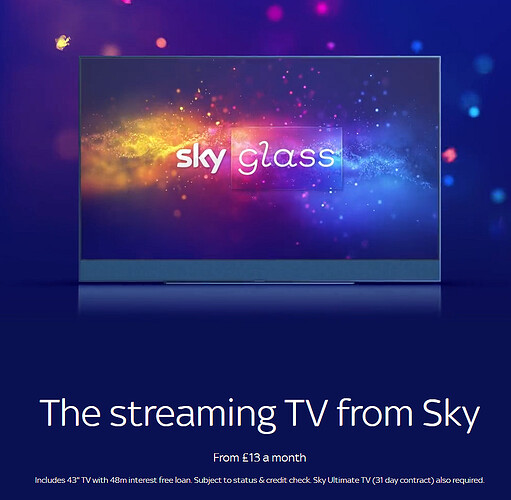 They’re going to need a much better internet-based service first before they drop the dishes. NOW TV doesn’t quite cut the mustard yet, and Sky Glass has some serious limitations. Can’t say how well the puck works with the Sky Glass service, but if they’re better than the Sky Glass itself then perhaps it could work…

However, I suspect this switch is actually driven by the massive cost-savings that Sky will make with this.

Sadly - I imagine there’s going to be a lot of Satellite installers about to find their job is no longer needed and will have to retrain or find another job and Sky wont need anywhere near as many ‘broadband installers’ as most people will now be able to just be sent the broadband and Sky puck boxes and set themselves up.

Also, eventually they’ll be looking at those big boxes floating in the sky and deciding when they’ll be switching off that service - I’m assume that’s costing them a bit of cash to keep them flying at the moment.

The switch, although for me personally would be good as a renter who’s not allowed to put up a dish, I doubt this is about given the user a better experience and things like ‘being able to actually record a programme’ is not something they’re going to care about.

With Sky Go also now available on Apple TV boxes and not just on ‘mobile’ devices like iPads and phones (not sure about other TV streaming boxes like Amazon Firesticks, Roku or Google Chrome sticks?) - I can imagine Sky eventually just scrapping NowTV and making the ‘full’ Sky service available via an App on other platforms, as well as via the Puck.

Mobile networks will probs be all over those looking at the way it’s going. Signal pretty much everywhere.