Has anyone used Monzo in Peru so far? If so, please share your advice here!

Hi,
Used card in Peru. Works fine in shops.
If used at ATMs local bank will charge up to £3,50

Used Monzo all over Lima but restricting use to chains and established stores. Although most places show the Visa logo only, nearly all accept Mastercard too.

You are nearly always required to sign, even though you have entered a correct PIN.

When paying, tell them it’s a debit card (debito) or they’ll assume credit card, which in Peru requires you to give them your passport number. Having said that, they do not check that it is correct…

Many restaurants put the amount through at 20% more, but this settles down to the correct amount after a few days.

BCP now only allow you one withdrawal per month, maximum of 700 soles.

Subsequent attempts you are told you have already made a withdrawal this month and your card is returned. No option to pay to withdraw (18 soles at other ATM!)

Has anybody discovered cash machines that will not charge you because your card is foreign?

Scotiabank seems to be the safest bet. Even BBVA cash machines will charge 18 PEN

Travelled in Peru with Monzo for a month and the Monzo card worked in all the places we stopped.

Scotiabank currently do not charge an extra fee.

Watch out for the ATMs running out of money over the weekend/holidays/festivals.

Remember to turn your magistripe on before withdrawing from an ATM as a lot of them use this.

Had no issues using to pay in shops ect other than sometimes it taking a few trys. I think this is due to the card terminal having poor connection not Monzo. They sometimes put the transaction through as more than the bill and then this corrects in a few days. Not sure why.

Card works fine in outlets that accept MasterCard, but given that a lot of places are cash only or charge 5% for card transactions, the limited ability to withdraw cash is a real pain. The ones that work will usually only allow 400 or 500 PEN too, which is around £100.

We have spent ages trying to find ATMs that work. Currently only BBVA wants to play ball and they charge for the privilege.

And yes, magstripe activated by Monzo long term as per my request, so I know that’s not the issue.

After having spent almost 2 months I can’t believe how reliant I am on cash. Scotiabank is the only one that works for me without the extra 18 PEN (which is an extortion, don’t you think?!)

Lots of places are VISA only, even around Plaza de Armas - very surprising…

Visa > MasterCard in Peru for sure.

We are off to Bolivia next and I hear that’s even worse than here. Good times!

Finally left Peru this morning after 5 weeks on the road.

Ban Bif - allows you to take out up to 700 PEN, but charges 18 PEN for the privilege. Interestingly there were no charges if I used my Santander UK debit card.

BBVA - allows you to take out up to 700 PEN, but charges you 18PEN. Most machines allow you to take out USD, up to $300. So it makes sense to withdraw USD rather than PEN.

BCP - allows only one transaction per calendar month.

Globalnet - never worked for us. By far the most common ATMs you will come across, which is very frustrating.

Scotiabank - allowed us to withdraw 400PEN once, then never worked again. No charge.

Peru is a hugely cash centric country. No one wants to take payment by card, unless it’s a western establishment or a high end hotel. A lot of places charge 5% if you want to use card.

Cash rules the roost here so be prepared for many, many, many trips to ATMs.

Scotiabank ATMs, at least in Cusco, started charging 20 PEN for international withdrawal. It looks like Banco de la Nacion is the best

Just arrived in Peru, so here’s the latest on Monzo. Will update as we travel through the country.

Globalnet is still everywhere and didn’t work for me (or my gf with her Monzo card).

We’ve used Monzo in a couple of restaurants without a problem. Both accepted VISA but also worked with Monzo too.

Having been in Peru a few more days, it is clear cash is king and cards are rarely accepted outside of high-end restaurants or touristy areas.

Cusco
MultiRed worked for us here again (with no charge) but only one ATM had notes when we visited so there was a bit of a queue.

BCP didn’t work for me, but BBVA did in Cusco. Gave the option to withdraw in Dollars as well. 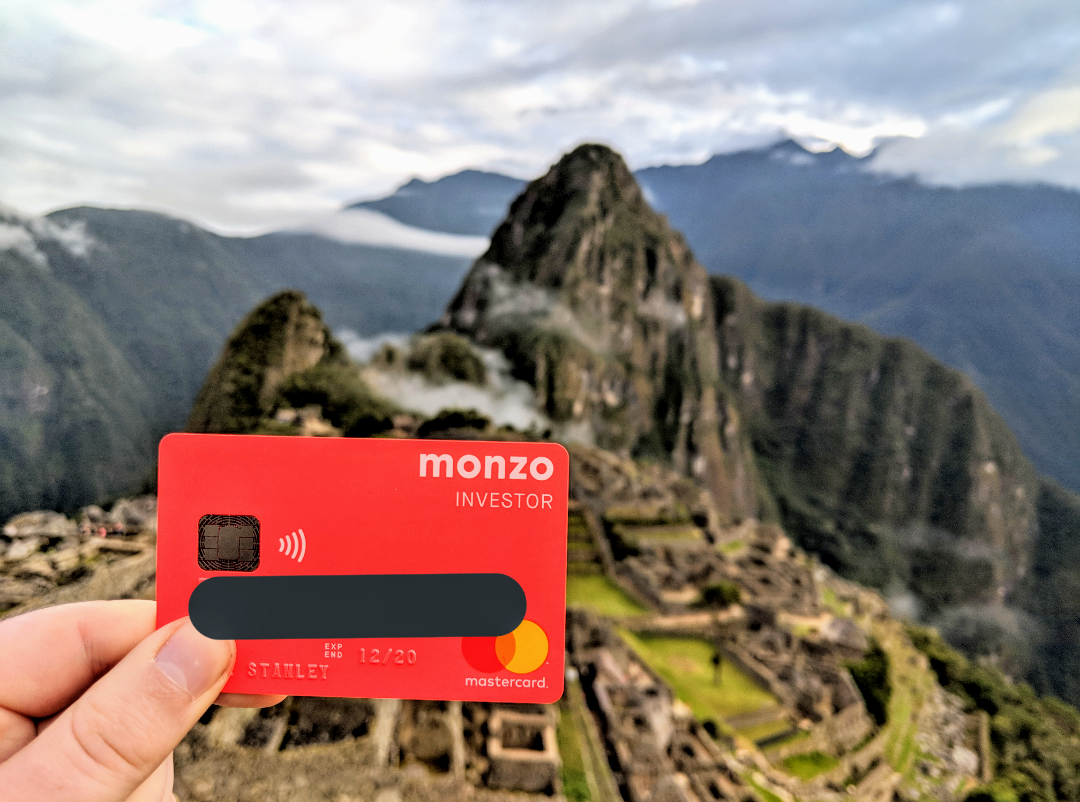 There are still a lot of places where MasterCard is not accepted though, worth having a bit of cash on you

Have used monzo so far in Cusco/Aguas Caliente.

I found that BCP bank in Plaza de Armas in Cusco let me take out money with no additional charge. This was limited to S/.700 at a time, but I was able to just reenter my card and do another transaction straight away.

Restaurants added the ~20% charge mentioned above, but I this was refunded after a few days with no issues.

As of 1st Sept BCP removed the 1 withdrawal per month limit which now makes them the most efficient to use @ 700 soles per withdrawal fee free.