Not allowing me to Unarchive Pot

As the title says.

When I am trying to Unarchive a Pot I am getting a message saying “Sorry, we can’t unarchive this pot as you have too many open already.”

There’s nothing stopping me opening a new pot with same name and purpose as the archived pot but I don’t want to create more pots, creating more junk, I’d rather just recycle pots previously used for that same purpose.

I also don’t want to repurpose an existing pot that I already have open.

Why is there a limit? What is the limit?

How can I resolve this issue?

There’s a limit of 20 pots open

To confirm, can you actually create said pot, and it shows in the list, or does it prevent it being created?

As noted above, there’s a limit you can have open at one time.

Oh right, okay. Thanks! I never knew that. Where did you come across the number being communicated? Is it in the app?

The app is still allowing me to access the “Create Pot” screens. So I would assume it would allow me to navigate through and actually create a new pot.
I haven’t tried yet clicking through all the way though and actually pressing the confirm button. As I said I’d rather not create one if I can just unarchive the ‘same’ pot.

when you actually try to open a new pot it will throw an error… As others have said 20 is the limit but I don’t think there is anything in the terms (not that I’ve seen anyway) which says the limit is 20. 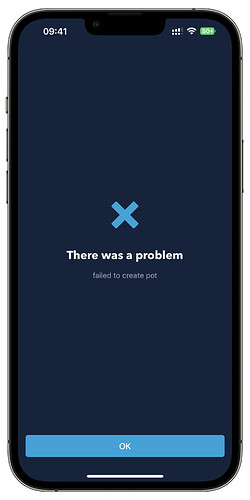 It’s not in the app that I can see, but there was a big announcement here when it increased from 10 to 20. I think it was a few years ago when they did the last crowdfunding