The grant was for me the real misstep, but, the whole process and guidance around it has been a mess, and seen two of those grants handed back. I suspect Monzo will get some cash in the reallocations.

As for the other bits, it’s a bit meh, and the road to profit was always going to take a bit of time as the bank scales up.

Tom’s tenure as CEO has been an outstanding success, but it’s time for a change as the company adapts and changes as it matures

The grant was for me the real misstep

Unless you have inside knowledge on Monzo’s application for a grant, surely that has to be bad luck rather than a misstep?

@HoldenCarver I think it was Tristan Thomas at Investival who said they dropped the ball, and failed to get business accounts in a place where they could win the money.

In fairness, Business Accounts have been really successful even without that grant.

Oh of course i dont doubt that they have been a success more so saying they launched when they did with the intention of using the grant money to build them.

That didnt come so they had to use resources which were allocated elsewhere to then build them and only really now are they starting to reap the benefits a year+ later.

Yep they are looking good, having £100m of basically free government money to build them and then run an advertising campaign to push them like Starling would have been even better

For me, historically it was always clear Tom’s strengths and passions were around product and vision, and customer centric stuff. And every interaction I had with Paul was more around business overview, which was his strength. And it’s probably worth mentioning that even before Paul left, he had stepped back a bit and had taken a sabbatical for a while.

So it’s not at all surprising to me that Tom hasn’t been happy with picking up that part of the work, and this realignment is quite natural - not dissimilar to Larry and Sergey at Google. I also think it makes sense to align UK and US to avoid siloed thinking.

It would be truly awesome if he replaced @simonb on here

I wonder, is the new CEO also forgoing his salary? And will it be the same amount?

I wouldn’t see Main high street banks taking them over unless they want to use the name on the high street or take on the technology and loose the name like Santander took on many and changed their name to Santander and all the Halifax branches in Scotland became bank of Scotland and nationwide swallowed up many building societies removing their name from existence and with rbs moving away from digital banks after they said they would close their app based bank they just launched shows banks do not want to embrace technology like monzo if they can remove monzo from the scene they have more of a chance.

When you own 7% of a 2B valuated company, annual salary is not really of importance.

I only mention it, because it was announced with relative fanfare when the furloughs were announced.

It’s only got to be good that he’s kind of out the way, hopefully with new leadership things may start to ramp up, we may see the coming soon joke vanish slightly, I’ll not hold me breath just yet though

If you take this as it’s written then it should be a very good thing, I would love to see a blog post from the man himself about it though 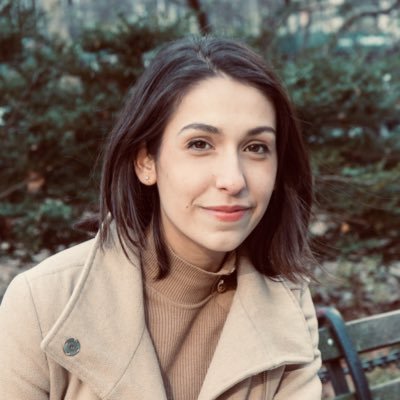 He’s not out of the way. He’ll just be avoiding all the boring regulatory meetings and paperwork and focusing on the product 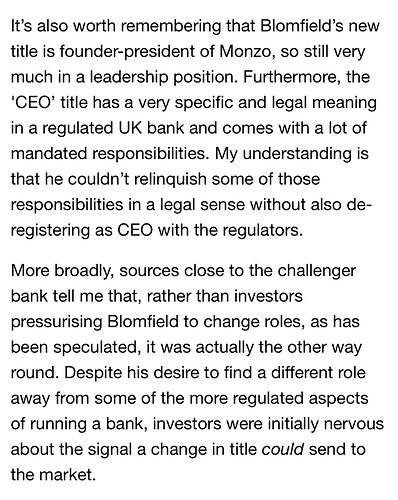 It’ll be interesting to see how it decides to make more money from it’s operations.

New CEO with stints at Capital One & VISA, and stints at Citi Bank which seems to include significant periods focused on lending. New COO with a long stint at American Express.

Maybe, it would be a logic move.

I just saw on Twitter and LinkedIn, he hasn’t updated his position from CEO to president. I wonder if he ever will change it to president, or if he will try hold on as CEO on social media!