I had porcelain pigs, but I was jealous of the people at school rocking the Griffin sports bag and pencil case.

This is a testing thread for the feature to report bugs and issues, and to give concrete feedback - please keep it on topic! Thanks

Worked fine for me when I tried with HSBC (this was just after the thread started; haven’t tried again recently).

But to use going forward I’d want to have the ability to type reference myself and to see the balance of the 3rd party account before typing transfer amount.

Even then, I’m not sure I’d use it. To be convenient the app for the 3rd party bank needs to be on my phone (otherwise authentication of payment would be a pain). In which case it’s just as easy to initiate payment from that app. If there were a way to authenticate one one occasion and not have to authenticate again for an extended period (like with data api, which only needs to be reconnected every 90 days) I might not bother with the 3rd party bank app on my phone and in this situation pulling money from Monzo app would be very useful. But I guess having to authenticate every payment request is a regulatory thing.

Truelayer advertise being able to access NatWest savings account data, so Emma is probably not using most up-to-date version of NatWest data API.

I was showing a friend easy transfers, and it had those connection errors, using the Vodafone mobile standard DNS servers.

Tried this with my Barclays account. really slick interface. Worked smoothly with transition between the apps and Touch ID on Barclays app to login.

Didn’t understand the default reference 'MONZO-ZYSRY" populated by Barclays. Or is that passed by Monzo when requesting the payment?

Didn’t understand the default reference 'MONZO-ZYSRY" populated by Barclays. Or is that passed by Monzo when requesting the payment?

Yes! We’re using Monzo-BLAAH references for now in case we need them to reconcile payments for certain providers in the future, i.e. to figure out which incoming payments are the one that you made.

But from what we’ve seen so far that’s not necessary, so we’re likely to switch to letting you write a reference like we do for regular transfers

Tried the journey few more time with my Barclays app and noticed that if their Touch ID fails (sweaty fingers) and you have to enter passcode, then it forgets the payment request and just keeps you on the Barclays home screen. There is no notification for a pending approval (as if the payload got dropped somewhere and Barclays doesn’t know that you’ve come from the Monzo app). Had to restart the payment request from Monzo again.

This is really helpful, I’ll raise it with them. Thank you!

Are used to transfer from my Lloyds to Monzo work smoothly be interesting to see if you can transfer from Monzo to Lloyds or another bank using the same method but no issues to me.

Can’t get it to work. Just get a wheel which goes around and around 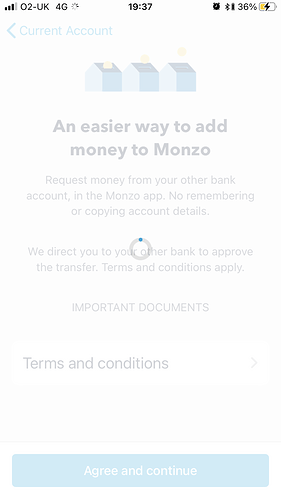 Monzo is down at the minute.

I tried this with Nationwide, and I personally am not sure it’s that much “easier”.

It launched my nationwide app, then asked me to pick an account even though I had already done that, then wanted me to state a reason for the transfer and then it did it. That’s actually more steps than if I had just launched Nationwide and done send to existing payee…

It’s a great idea, but for it to be easier it’d have to be less steps.

If the Nationwide app is asking for that additional stuff then I see what you mean.

Plus also, is there a reason that this is all under the “add money” button. Which until now I have never used. It actually took for 20 minutes to find it in there, as in the guides there is no mention of that.

User journey wise I would expect to select payments at the bottom and then request, for example.

Sorry if that’s already been mentioned - many replies!

It has been mentioned by a few, but you’re right and many agree.
I think the key thing to remember here is it’s still in labs, which means it could always move to a more prominent position in future.

That’s very true! I hadn’t thought about it from that perspective.

Hey!
Tried this today to give it a shot and I found it a good idea.
My only issue is an error happened on my Barclays app that wouldn’t let me continue! I also have a Lloyds Bank account and it worked fine with them, so that’s good!

Just need to sort out that issue with Barclays, thanks!

Yeah the Nationwide app makes you jump through hoops including, if I remember correctly, a scary disclaimer about fraud that made me think twice even though I’d initiated it myself.

I personally am not sure it’s that much “easier”.

It launched my nationwide app, then asked me to pick an account even though I had already done that, then wanted me to state a reason for the transfer and then it did it. That’s actually more steps than if I had just launched Nationwide and done send to existing payee…

By law (RTS-SCA 32(3)) it has to be the same experience as if you did it from their own app, the loops and hoops you encountered are probably related to it being a “new payee” and would have to be the same if you used their app. This feature shortcuts inputting your account details (name / sort code / account number) which isn’t just time consuming but also error prone