Any examples of a comparator product being used in the past?

There’s a bunch of articles about “monzo being a facebook of banking” in google, but I am not sure the execs themselves said it.

first link: Is Monzo the Facebook of banking? | Apps | The Guardian

Pretty sure Monzo was a carbon copy of Simple Bank (that now failed) and was always compared to that in the beginning.

This didn’t happen, because nobody knew of Simple in the UK outside of people who were really into fintech, or spent a lot of time in the US in the startup scene there.

Our product also had very little in common with then, although they hilariously did send us a C&D based upon an early design that was shown online, where they objected to the usage of the phrase “Safe to Spend”. This was even before the alpha as I recall.

As @uFlock mentions, Monzo was initially a copy of Simple. To the point where there there was a legal issue between the two companies.

I distinctly remember press puff pieces and interviews where they were described as “The insert big tech brand name here of banking.

This didn’t happen, because nobody knew of Simple in the UK outside of people who were really into fintech

Don’t have the source to hand right now, but your executive team certainly had heard of them, as one of them once described Simple as a key influence behind building Monzo. I’ll try and dig this up when I have time later. Was pre-launch IIRC.

Yes, but that is pretty different to marketing yourself as “The X of Y”, which we never did. There were certainly neobanks in other markets which we were aware of in the early days, I don’t think anyone who was around in 2015-2016 would deny that. But it would have been pointless (plus, not our style) to use that as a marketing descriptor, because outside of the startup world neobanks weren’t known by the general public back then.

I dispute that we were a “carbon copy” and that anyone outside of startup folks and maybe the odd person who had spent time in the US ever made those comparisons. It’s extremely unlikely that anyone on the early team had even used it, save perhaps Dillon, our original COO Patrick (both American) and maybe Tom.

I remember some news articles making the Facebook comparison as they tried to explain fintech to their readers, but I don’t remember Monzo ever leaning into the comparison themselves, much less using it in any of their marketing.

Indeed, Monzo’s biggest advertising campaigns have always positioned Monzo as being very much thing. It wasn’t “You make Monzo the Facebook of banking”.

As @uFlock mentions, Monzo was initially a copy of Simple. To the point where there there was a legal issue between the two companies.

I don’t think that’s quite right. Monzo was a very different beast to Simple and took some very different choices - unless you just think that a digital app-first bank is a copy (although Simple had web access and telephone banking, I think).

As @simonb points out, the point of contention with Simple was the “Safe to Spend” figure. This is probably the Tweet they found it from: 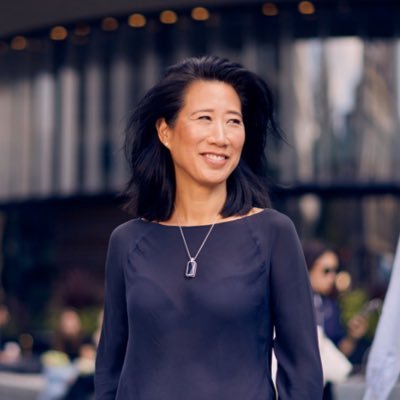 @eileentso
OMFG I've never been so excited about an ATM withdrawal; note app balance update even before cash dispensed@GetMondo http://t.co/nThcTzekjj 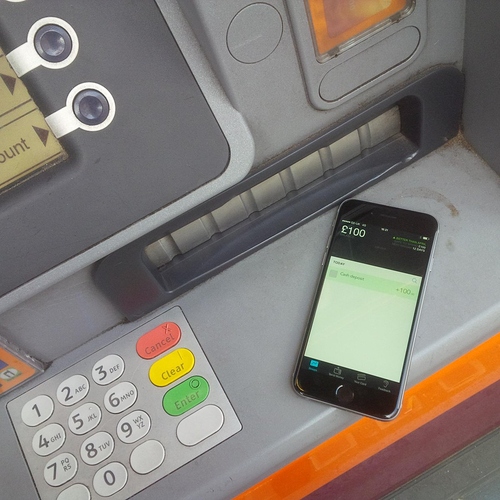 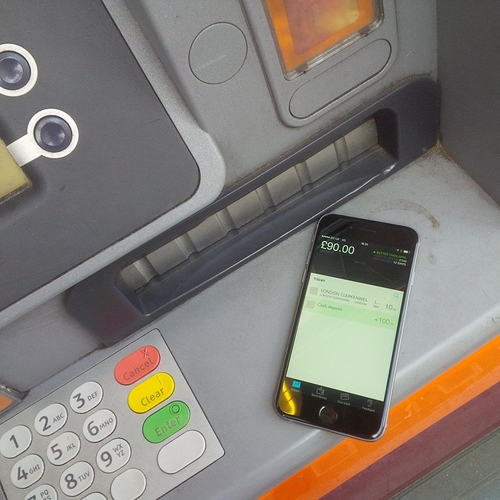 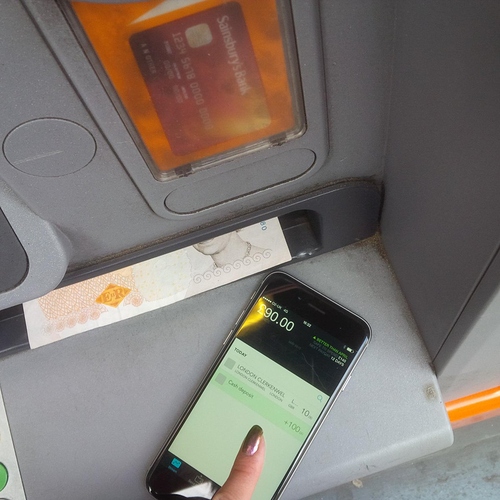 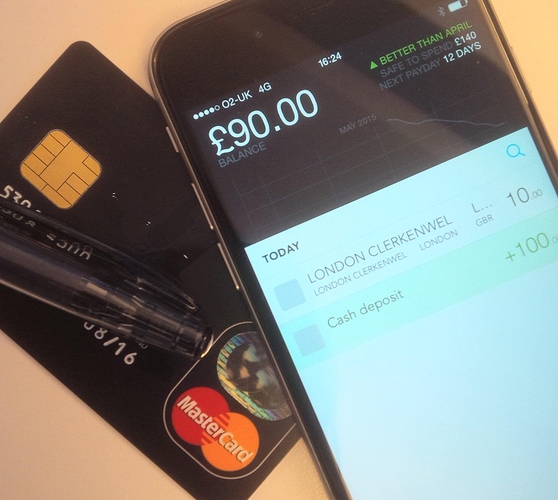 It’s a super early version of the app. This is what eventually turned into Summary Left to Spend figure, which in and of itself is a very different take on the Simple approach.

Incidentally, whilst digging out that tweet, I did find one relevant to my earlier question:

Yep and worth noting that nobody outside the company and Eileen / Passion Capital had access at that point.

Just on this, I think it’s probably a bit simplistic (pun intended) to say that Simple failed. As I understand it, they were profitable, but were just acquired v early in their lifecycle by BBVA, who then sold off their US business. We don’t quite know if BBVA wanted to hold onto the Simple IP (and therefore closed it) or if the acquiring bank didn’t understand or fancy it, but I don’t think it ‘failed’ in the traditional sense. But yes, either way, it’s not with us any more. (Maybe @while-loop knows more?)

As @simonb points out, the point of contention with Simple was the “Safe to Spend” figure.

Except it wasn’t, as Simple stated in their cease and desist the issue was the use of their trademark in a product that is virtually identical to theirs. An allegation Monzo never refuted nor challenged. They complied with it. 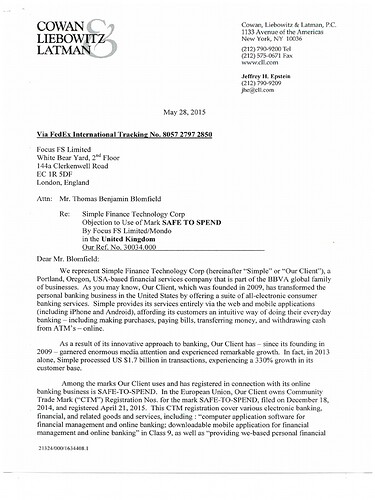 Except it wasn’t, as Simple stated in their cease and desist the issue was the use of their trademark in a product that is virtually identical to theirs.

I’m not a (US) lawyer, but I think that a) a reference to the category (banking) being identical, b) relying on one comment from an online article (“In the US, Simple Bank is very much like this”) which you’ll note doesn’t mean the same thing, and c) it’s an assertion from a bigger firm that has the money to lawyer up.

All of that means that Simple’s lawyers putting it in a letter doesn’t make it true, it just means that they sabre rattled Mondo enough to change the phrasing. I would have done the same: it avoided a costly legal fight they didn’t have the time, money or appetite to fight.

So ultimately the answer to my question is that Monzo has never advertised or compared themselves as the X of banking which was my recollection!

I think Simple was successful (as an ex-Simple user myself), but I think you may be in the right direction of it’s shutdown being because of business acquisitions/closures. Just me speculating from the outside!

You’re putting words in my post Dan! And yours! That’s not the question you asked, and that’s not what I claimed.

The discourse that followed my comment proves my initial statement true. If folks don’t like the truth of that narrative and want to now twist what’s been said to suit their ideal, well that’s up to them, but I’m disinclined to engage with it.

The facts are, I said Monzo have been described with the same comparisons and buzzwords. The discourse that followed has proved that. Let’s not now move the goalposts by asking me to prove a claim I never made.

This isn’t true though, which is what people are pointing out.

Articles calling someone the Deliveroo for dog delivery is nothing new, they do that for everything because it gets a good headline and it’s easy to digest and understand. But Monzo themselves didn’t do it.

But Monzo themselves didn’t do it.

I’m not saying they did! But The Guardian certainly did!

If you go back and read the post that triggered this train of discourse you’ll see it was a journalist making that statement for that Company, not the company themselves.

This isn’t true though, which is what people are pointing out.

That executives didn’t say it in interviews and tweets? Because that’s not the point folks have been trying to make. An executive saying something on a stage != monzo advertising themselves.

So basically Monzo didn’t do anything like this but the media did, case closed.

Yup. Same as the company you criticised for the same thing. Can we move on now?

Wait did Monzo put ads out quoting comparisons made by third parties?
Aka an insta ad saying “Monzo, like the facebook of banking” for example?

No, the Guardian did, just like The Evening Standard have done here.

Can we stop moving the goal posts to make it appear as if I’ve typed things I’ve not please? Monzo have shared quotes about them on socials too if that’s what you’re criticising now.