Just returned from Pakistan and Bahrain. I used Monzo throughout my trip and experienced no issues. In Pakistan I used MCB Bank cash mashine which has 200 Pakistani Rupees (£1.50). I tried another bank UBL but didn’t work. In Bahrain I was able to use everywhere I tried.

Does anyone know if there are ATMs at the major airports, and if Monzo works at them?

I know Lahore airport has 3 ATMs and I was able to use MCB there is transection charge of Rs200.

Just tried withdrawing some money at a UBL ATM, no luck. (Prepaid card.) My HSBC Visa worked fine though.

Try MCB, Standard Chartered or Bank Al-Falah. MCB was my go to when I visited Pakistan last year. All the ATMs have a withdrawal charge MCB was 200Rs per transaction.

Oh, also should’ve mentioned that there was no charge it seems. Got a nice 137 exchange rate.

I gave a Monzo card to my wife for her trip to Pakistan. Unfortunately, it did not work at all regardless of enabling the magstripe. Tried in ATMs of MCB, SCB and Bank Alfalah. Eventually had to transfer the balance through WU to a local account online.

I will be travelling to Islamabad and Karachi next week - has anyone had a recent cash withdrawal experience at one of these airports?

I’m not sure when your wife was travelling, but in the past users had to be verified to be able to use ATM withdrawals. If your account was new, maybe it was the cause?

As of right now, all users are verified due to new EU regulations, Monzo went through the process of verifying all users.

Also, users reported various banks as working / not working, maybe your wife was unlucky and had a streak of ATMs that are were working with Monzo?

Was Location-based security switch ‘on’ in your card settings? If so, and your phone presumably with you back home in UK, the transactions could be declined. Did you get any notifications in your feed?

It’s her card and she had the phone with her. Notifications was the first thing I got her to check as usually even a wrong pin notification is instant, but she got nothing - I don’t see an option for location based security though, not on my app atleast

has she hit her cash withdrawal limits ? in the app - “card” - “settings” - “spending limits”

Hi
I was able to use an ATM at MCB Bank and HBL with a 200Rs charge. Tried many other machines without any luck.

Standard Chartered and Askari worked as well for me 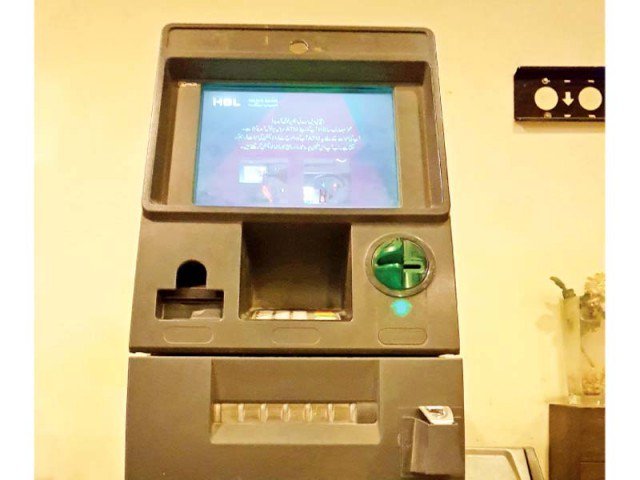 Beware - hackers are going after ATMs in Pakistan | The Express Tribune

FIA begins probe as HBL customers lose millions in cyberattack; bank says all those affected will be reimbursed

I was in Pakistan a couple of weeks ago so just for the benefit of someone going there Monzo worked in all the shops and restaurants where I was able to pay with the card. Not a single decline or any issue at all, they use chip and PIN at most places but some still swipe and sign

Cash machines are not free to use and Monzo card did not work with a lot of ATMs there. I would recommend using MCB ATMs there they are the cheapest (200PKR charge and 20,000PKR withdrawal limit per transaction) MCB has cash machines almost everywhere, they have ATM locater as well;

There’s no need to enable Magstripe when withdrawing cash there.

Thanks for this. I was there last year and I couldn’t get any machine to work.
Also, I didn’t know cash machines over there charged. Just shows what we take for granted here in

I’m considering opening a bank account there. Most branches are in my town, PirMahal, any recommendations on banks or charges I should watch out for?
Will be occasional use.

I used Monzo in Pakistan last year and I can confirm what you have said.

In some banks the card did not work but the card was always returned.

If you have family or friends that can transfer you money that should be fine and you can send them they money via another avenue.

I am not sure if it is suitable for you to be using monzo as your primary account if you have moved to Pakistan.

While they charged PKR 250 back in May 2019, MCB now charges PKR 800 in December 2019. I have confirmed this with two separate transactions - attaching latest ATM receipt.

Their “schedule of charges” document has no reference for this. Their customer service representatives are unable to point me to the relevant documents.

But there’s no other choice. 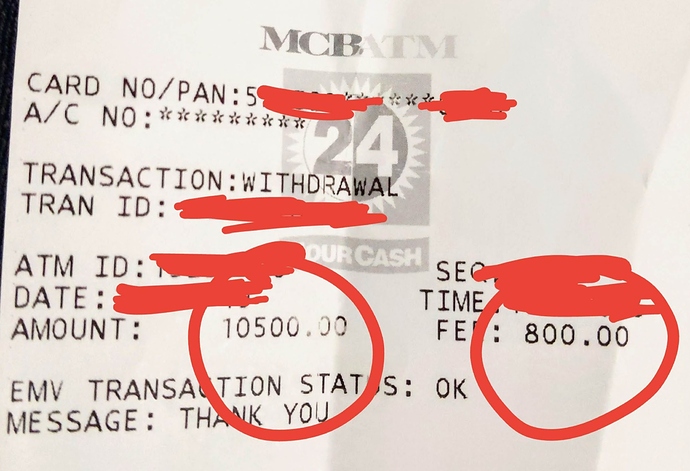