Testing so far… Laos is of course a cash economy, cards are barely useable as day to day spending… Thats any cards not only Monzo. ATMs also seem temperamental and ‘iffy’ eg one machine asked for how much I wanted, said OK, spat the card back and sat there with no indication if money was coming or not !! Again this isnt a Monzo thing.

Each ATM I have used successfully has charged 20,000 kip.

My Hotel which is card enabled and bills in USD is adding 2.5% ‘credit card fee’ to the bill. I am going to try to speak to the french manager to see if that applies to ‘debit cards’ also but I doubt they see the difference.

I am burning through my monthly 1000 GBP and intend to pull cash for the hotel in a few days. So those cash limits are really small when travelling and needing cash. Not really useable for travel like that.

Forgot to mention. Successful ATM use has no location data and it doesnt update average spends, or total spent.

It sees the amount, in both LAK and GBP but thats it. But shows no exchange rate or breakdown of costs, or what bank machine used or anything additional.

Unsuccessful ATM use doesnt even appear to reach Monzo… No in app notification.

We found the same 3 weeks ago. Most use Magstripe which at the time left us with few options than a currency exchange counter. We found a free withdrawal ATM in Luang Prabang though, so best to check around unless you’re desperate.

The ATM in question was in a row near the beggining of the night market. 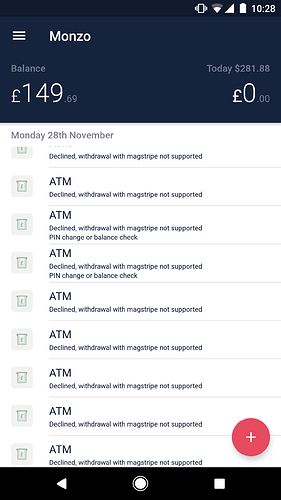 Sadly this shows the state of Laos banking with monzo.

Hotel insisted on +2.5% and even when I could find ATMs that did chip and pin they wanted 20,000 kip (about 1% if you took the max 2 million) of course location data invalid or non existent.

Much of Laos doesn’t even have sealed roads so expecting anything more really a case of to high expectations.

Oh forgot the strangest one…

Trying JGB bank… Card in, pin in, but when it comes to cash dispensing the machine wants to know which account, savings, credit, universal, default… Many options… With my normal cards anything seems to work, I usually pick universal or default but I cant remember it ever not giving me money… With the Monzo card none would work but the odd point is…

…Digging around in the menu, to see what account the ATM wants to hear… there was a mini statement option (or similar this is from memory days ago) and it listed my onzo balance, in KIP, as being IIRC a ‘checking’ account… So it could see my balance, but on returning to the menu systems there was no withdrawal from checking… It listed the balance as being in a sub type of account, which then had no option for taking that balance it could see.

Anyway… Maybe thats a red herring and the JGB didnt handle non magstripe anyway as I was struggling with roaming data I batch collected the rejections when back in the hotel and couldnt really work out which machines were which.

even when I could find ATMs that did chip and pin

Just to pick up on this point, the latest update of the iOS app included magstripe support which should make life a lot easier for travelers who need to withdraw money.

In the UK, almost all ATMs use chip and PIN to validate your identity when you try to withdraw money. However, that’s not always the case elsewhere around the globe and in many countries, ATMs use the magnetic stripe on the back of your card to dispense cash. Up to now, we’ve disabled magstripe ATM withdrawals to protect against the increased fraud risk that these ATMs bring but from today, it is now possible to temporarily turn on magstripe ATM withdrawals for 24 hours. You can access the setting from your Profile or from a transaction that’s been declined by a magstripe ATM. 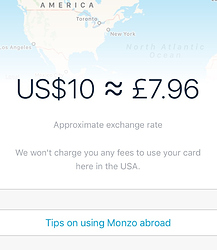 Obviously Monzo is building up a ‘knowledge base’ of these tips so some country’s will be more detailed than others but for the US for example, there is advice about which option to select when using an ATM 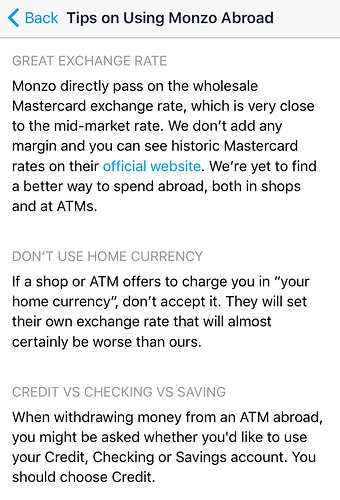 if you don’t see this advice in the feed item, please do share your tips here so that they can be added in the future

Is this iOS only at the moment? I noticed @PhatPheddy is using Android, and I don’t see this option on my Android device.

Good point, it’s iOS only for now & it’s only available for users who signed up for early access so I expect it’ll be a while before it’s built for Android (it’s not on the roadmap yet).

the latest update of the iOS app included magstripe support which should make life a lot easier for travelers who need to withdraw money.

I assumed that was a card issue not an app issue… I think a lot of the issues will change when the banking license is there.

Let me guess… Not for Android ??

EDIT :: Asked and answered already… I am going to make no further mention of auburn haired surrogate children…

BTW… Very well done for recognizing and disabling this risk… In Thailand mag stripe (and micro camera or fake keypad) is all too common and ATM fraud is a regular news item. Knowing I can use Monzo with that extra confidence is a bonus.

Just a quick update of my experience taking out cash in Luang Prabang (LP), Vang Vieng (VV), and Vientiane about 3 weeks ago:
-BCEL bank charges a flat 20k kip
-LDB charges 3% on the withdrawal amount
-Bfl bank and ANZ charge a flat 40k kip
-Phongsavanh bank charges 20k kip (Vientiane only)
You can also use your card instead of cash at some money changers which is useful but I chose not to do this (and I do not know if they charge a fee to use your card)
There is a lot more variety of ATMs in the capital Vientiane than there are in VV and LP where LDB, BCEL, and Bfl predominate.

Currently in Laos. Thought I’d check the info about the free ATM near the night market in Luang Prabang. When I used an ATM in Siem Reap (Cambodia) it told me what the fee was and asked if I wanted to continue with the transaction. A word of warning - no such courtesy in Laos. I thought I’d try a few ATMs but the first one made the transaction with no warning of the 60,000 kip charge - not at all happy! By dumb luck I’d picked the most expensive bank to use: JDB. One to avoid!

Just returned from a trip to Laos: Vientiane/Vang Vieng/Luang Prabang. Didn’t use ATMs at all due to charges. Found the best GBP LAK cash conversion rates at moneychangers in Vientiane on Ave Lane Xang, just a bit further up from Talat Sao Mall toward the Patuxay monument on the right side of the road. The conversion rates in Vang Vieng were not as good.