I’m off to Japan next month. Can I expect the card to work there?

I’ve just got back from Singapore using my card and I thought I should mention try find out about the currency conversion rates for Japan. I found out that Mondo and Mastercard gave me a much better currency exchange rate than if I went to a anywhere else in the UK to buy Singapore dollars and then thanks to no fees on cash withdrawals (Apart from local machine fee) or purchases I just got cash out in Singapore at local ATMs.

Good tip @aranw. How did you find out the rate for Mondo?

Almost certainly, just be aware that Japan is mostly cash based. I used Seven Bank and JP Post ATMs as they were everywhere, had English menus for the people I was with, and excellent foreign card acceptance. You’ll find them at almost any JP Post, Family Mart, 7-Eleven or major train station. The Seven Bank ATMs may ask what type your account is. If a withdrawal fails and you get an error receipt, try one of the other types.

I highly recommend you pick up a Suica, Pasmo, ICOCA or other IC network card if you’ll be using public transport or are in any major area and use it for everyday spending with a good 5,000-10,000円 cash backup. Acceptance of IC cards is FAR better than foreign credit/debit cards outside of hotels, taxis and high end stores. Dealing with 1円 coins is the worst too.

Hope you have a great time! I miss Japan.

I asked via the chat with us feature and they sent me a link to I think a Mastercard website that had a horrible interface for a mobile to search on.

For anyone interested there is a conversion tool for MasterCard here:
https://www.mastercard.com/global/currencyconversion/

I’m also heading to Japan next month so this is a pleasant surprise for cheap exchange rates!

Just tried at Chiba Bank and Mitsubishi bank - but I couldn’t withdraw cash with Monzo or any of my other 3 cards! Bit weird as the Monzo card works fine for purchases locally.

Banking over there is very strange compared to here, different views on money lead to very different products and networks.

You should have much better luck at Citibank, Seven Bank or JP Post ATMs. These are MasterCard connected ATMs with EMV chip support (Monzo’s card provider declines magstripe ATMs) and you should find the latter two in any 7-Eleven or Family Mart. I don’t know how widespread the ATMs are outside of Tokyo, Osaka and Kyoto though.

Thanks Richard - got it working at a Family Mart! Almost didn’t believe it after going through crap interfaces in 2 banks with 4 cards!

I tried a couple JP Post machines and neither worked. Maybe some are different. Seven Bank ATMs in Seven Elevens are working a charm though.

Transactions in Japan will often show up as 3 entries on my timeline:

I described this in detail here:
https://community.monzo.com/t/tripling-up-of-foreign-transactions/3395

Damn, this place is crazy cash heavy! Actually not that easy to use a card for a lot of things - everywhere people give you a funny look, swipe it, get confused and then ask you to sign.

So long story short, I’m approaching my limit of cash withdrawals on Monzo and will need to find another route to cash pretty soon. Can anyone recommend a good way to convert a load of money to Yen (can pass to my wife’s Japanese bank account) - or otherwise get a good rate on cash withdrawals. (we’re here for next 4 months and all my savings are in Sterling)…

Or maybe there’s a way I could send a load of money from Monzo to Pasmo / Suica or some other local cashless payment card? That would be dead handy.

Thanks in advance for any suggestions!

True! Cash is king in Japan followed by IC card.

These are in place to reduce their exposure to fraud

The ATM withdrawal limit is a measure to cap our exposure to fraud losses. Criminals often use prepaid programs like ours to turn stolen card numbers into cash.

Some banks are willing to increase withdrawal limits if you call them and indeed requesting higher ATM limits following extra security checks might be a neat feature for Monzo.

But there is a second problem - Japanese banks have dropped the one-time withdrawal limit on foreign bank cards to 50,000 yen following a heist on 15 May 2016.

So your best bet might be to transfer money (eg. https://transferwise.com) to your wife’s Japanese bank account, I believe the limits will be higher.

Thanks Saveen! Looks like Transferwise might be the way to go - I guess there’s no way to pay money to a bank account with Monzo or Revolut?

No problemo! Not directly as they are pre-paid cards but this will become possible when Monzo launches current accounts in 2017. 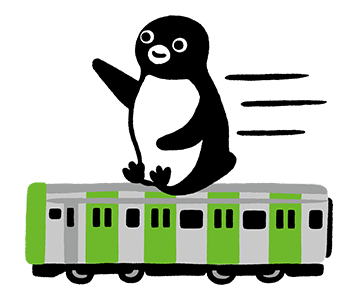 (I love this penguin a bit too much.)

PaSoRi devices work but you may run in to issues using a Monzo card with the Suica Internet Service. Gateline auto-charge only works with specific partner credit cards.

Something to try and report back on: It is possible to charge Suica at many convenience stores, these same convenience stores can take Monzo cards. You can see where I’m going with this. Same should apply to Edy at least, not sure about WAON or Nanaco.

I heard that charging Suica at convenience stores was usually cash only?

It would be interesting to see if this is possible. If it works, locate the nearest clamshell mobile and proceed to celebrate as follows…

It wouldn’t surprise me if convenience store recharge was cash only but worth checking. Aside from doubling up on Monzo and Revolut to stack ATM limits plus TransferWise, there really aren’t many options.

Really just wishing JR East would roll out their international credit/debit card acceptance as part of the Apple Pay project for 2020 but that’s not due for at least another year. Initial testing of that shows only credit cards are accepted for selection in the payment sheet and it’s likely further filtered for Japanese cards during processing.

Also checked with a friend more knowledgable about the Rakuten Edy system, apparently similar restrictions on charging from credit cards using PaSoRi and their own Edy reader apply.

Right OK … Transferwise seems like the best bet then. Might try and open a local checking account too so I don’t have to muck around too much!