Here’s a nice simple thread about the latest beta app update for Android. Figured it would be nice to keep track of updates on android updates as they come in

(Beta updates arrive a week before a widespread release)

First update on the beta channel since Android Pay came along… “High 1.7”

No new features, fun changelog though! 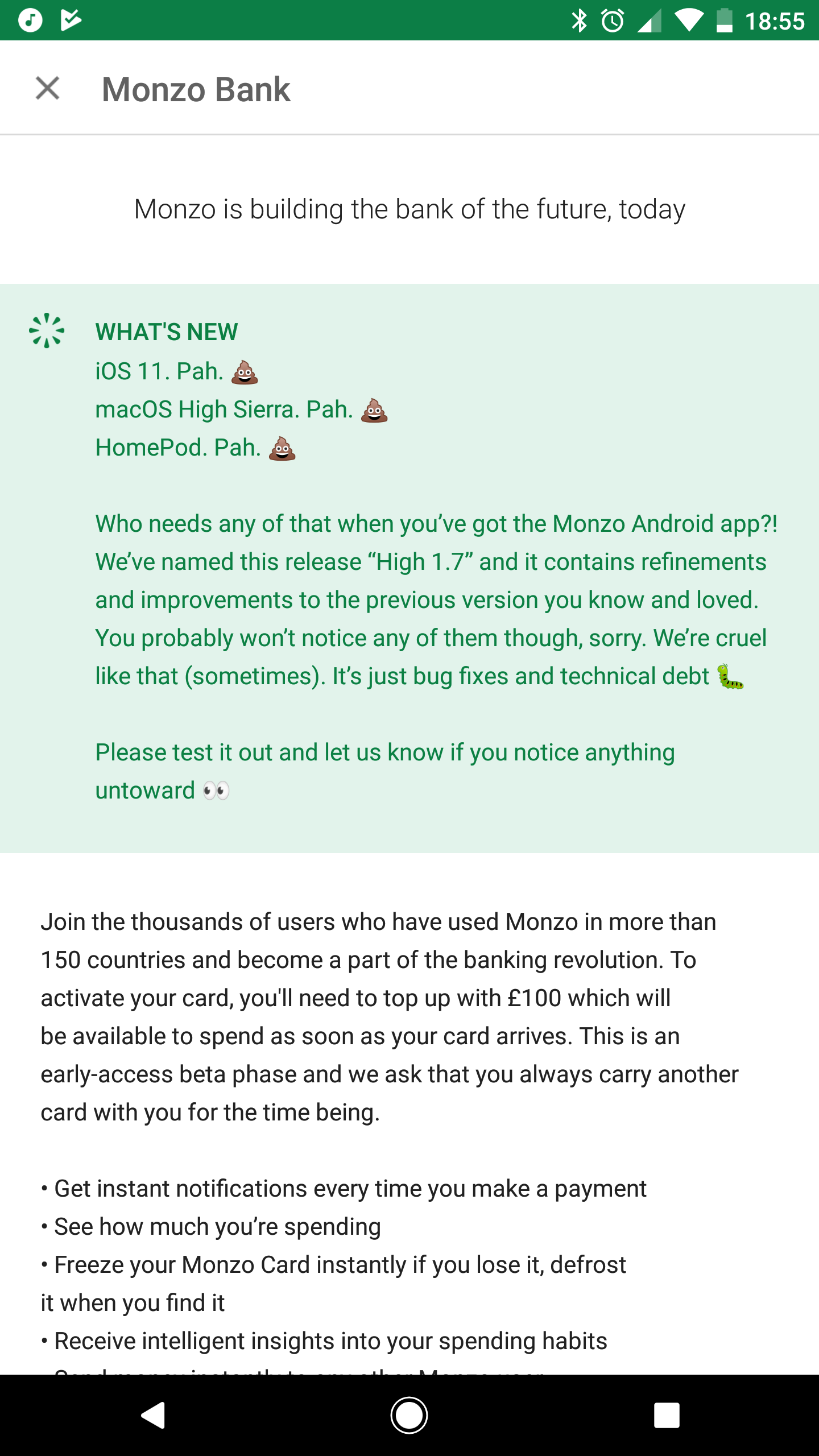 For those curious about joining the beta there a 2 super simple methods!

Head over to https://play.google.com/apps/testing/co.uk.getmondo - Click join and within a few hours you’ll be able to update to the beta version on your deivce!

On your Andorid device, jump over to the Play Store, head to the Monzo app and scrollllllll to the bottom.

From there you’ll see a Beta Tester card, hit “Join” and give within a few short hours you’ll be able to update to the latest beta version of the app

Once you’re in (this applies for Method 1 & 2) you’ll see this card if you scroll to the bottom of the Monzo page on the Google Play Store. 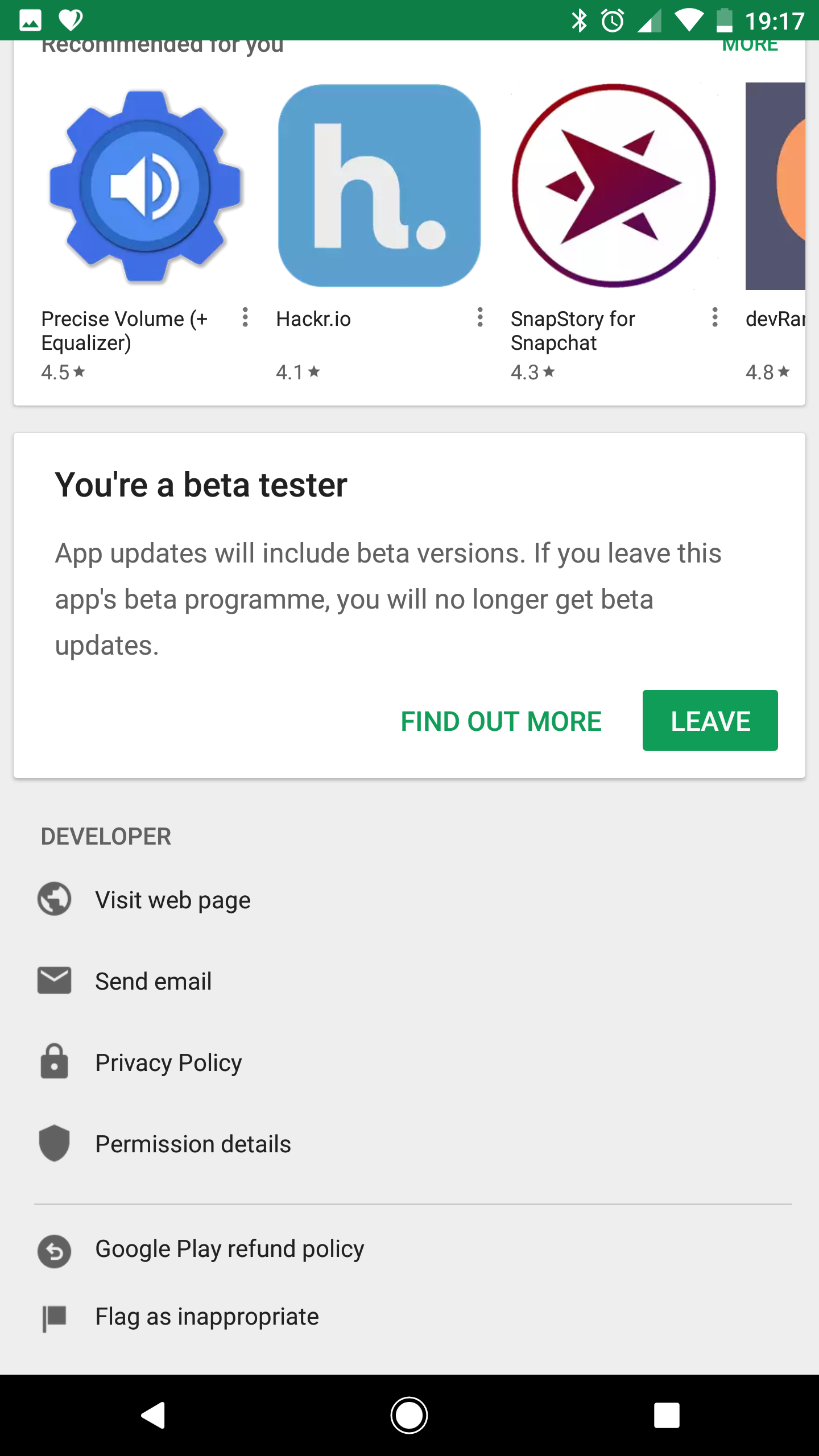 Mentioned to me by @alexs - If you’re up for joining the beta then it’s a fantastic idea to join the Monzo team (yes! the real guys and gal’s over at

!) over on their Slack channel - Linked here

Once you’ve joined you should be able to subscribe / join the #android channel!

You’ll be able to give direct feedback and have a very visible forum in which to report any of those nasty bugs which might have slipped through the cracks!

*disclaimer: Beta versions may or may not be ready for day-to-day use (though, they’ve been remarkably stable in my experience) nevertheless, be cautious! If you want stability, stick with the normal releases. But if you like to Bank on the bleeding edge, join join join!

PS: You can leave the beta at any time and revert back to the stable channel if you encounter any issues - But do report bugs to the Slack channel to try and get it fixed for other users

Thank you for the information. I’m in

Awesome Darren! Glad to have helped

Familiar with the json being returned and Slack for messaging, but very new to Monzo and the API so looking forward to writing something other than just checking the API out in the playground 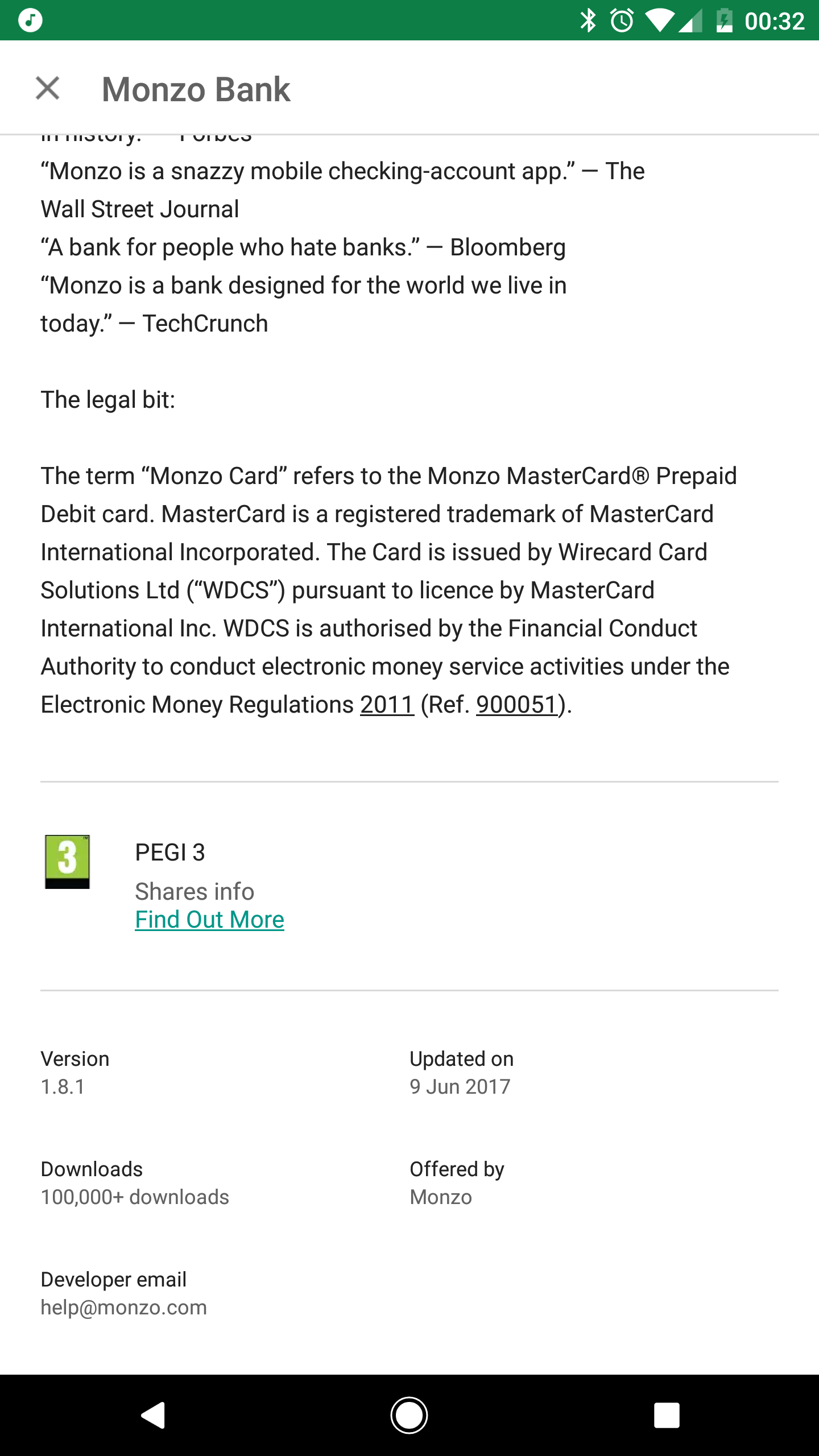 Another week another version bump!

No changelog source differences, I’ll see if the slack channel has anything fun to say 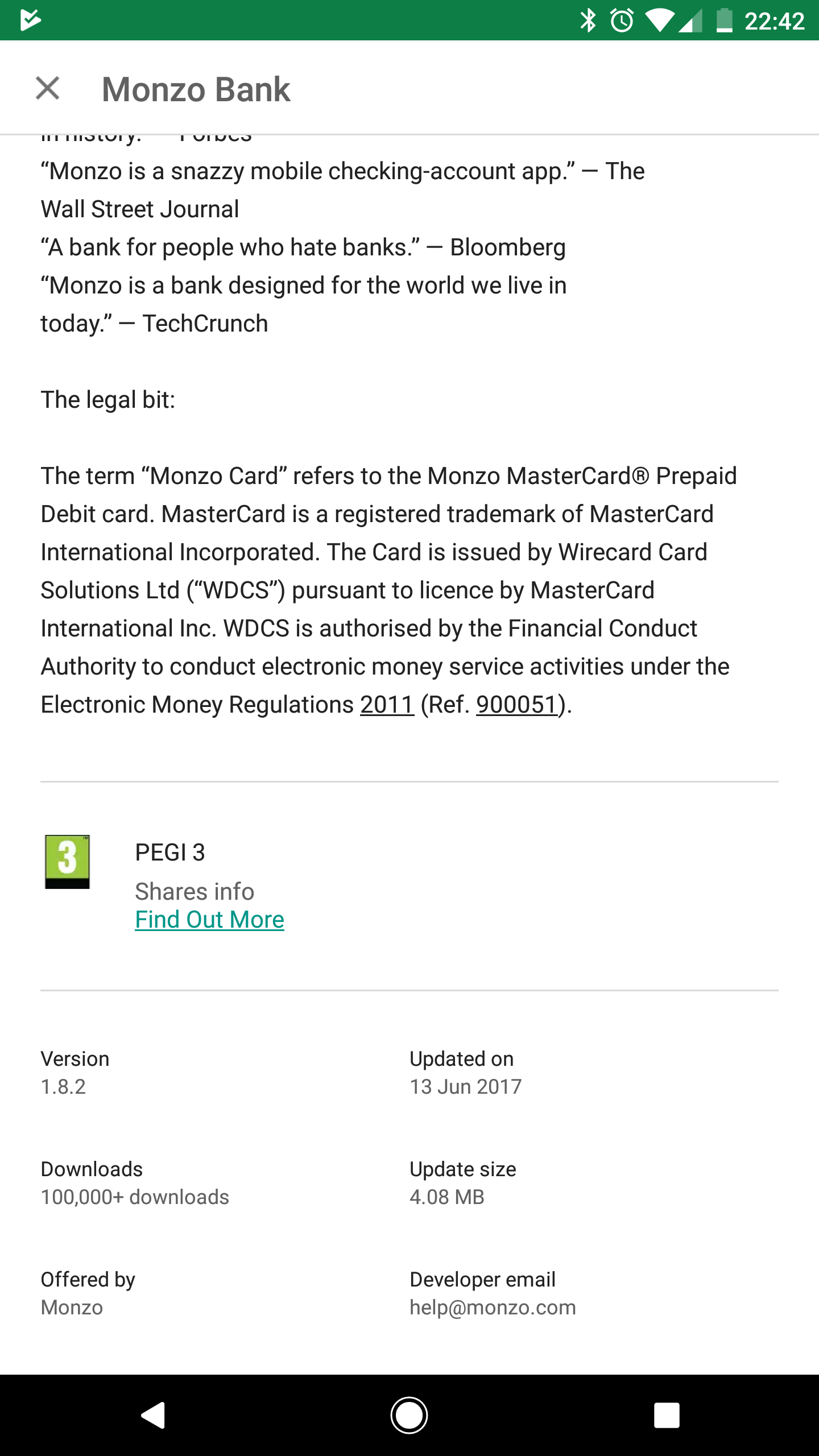 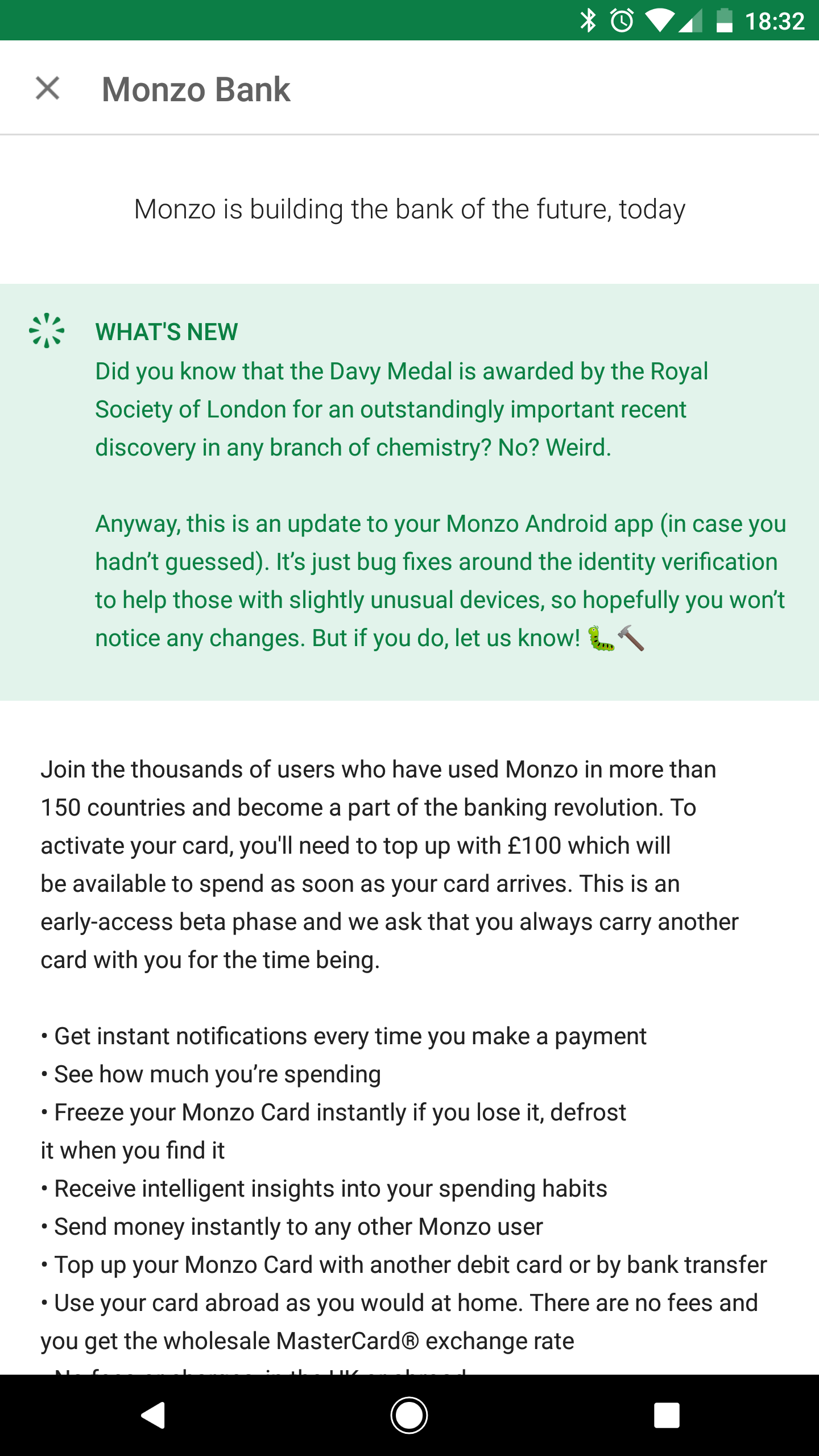 Nearing the end of June!

No change to the changelog from last week. Likely bug fixes 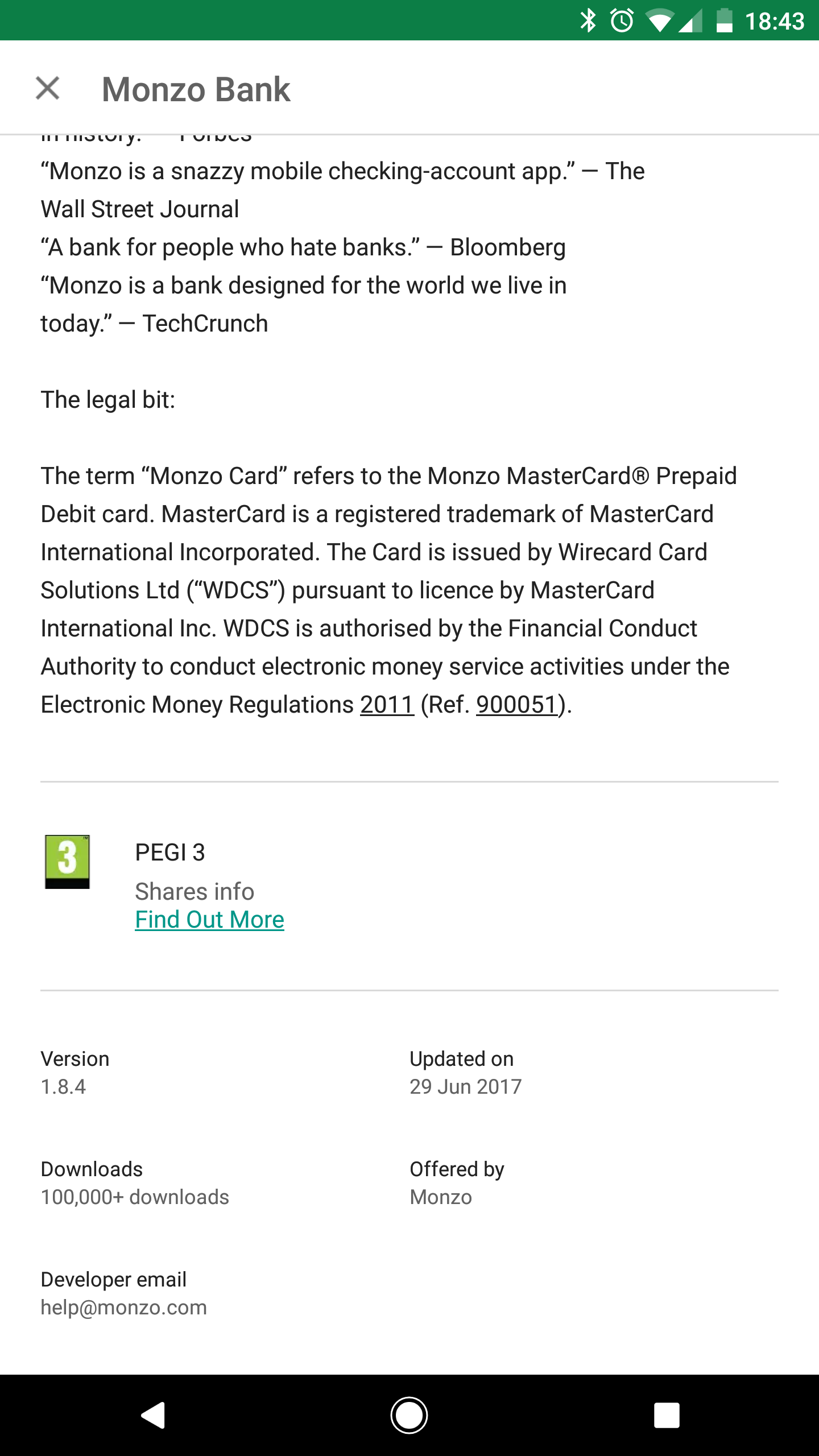 Looks like a nice new addition (IMO). Having spent just a few minutes with it, it already feels like a more professional and well rounded app

So I cannot wait for that! 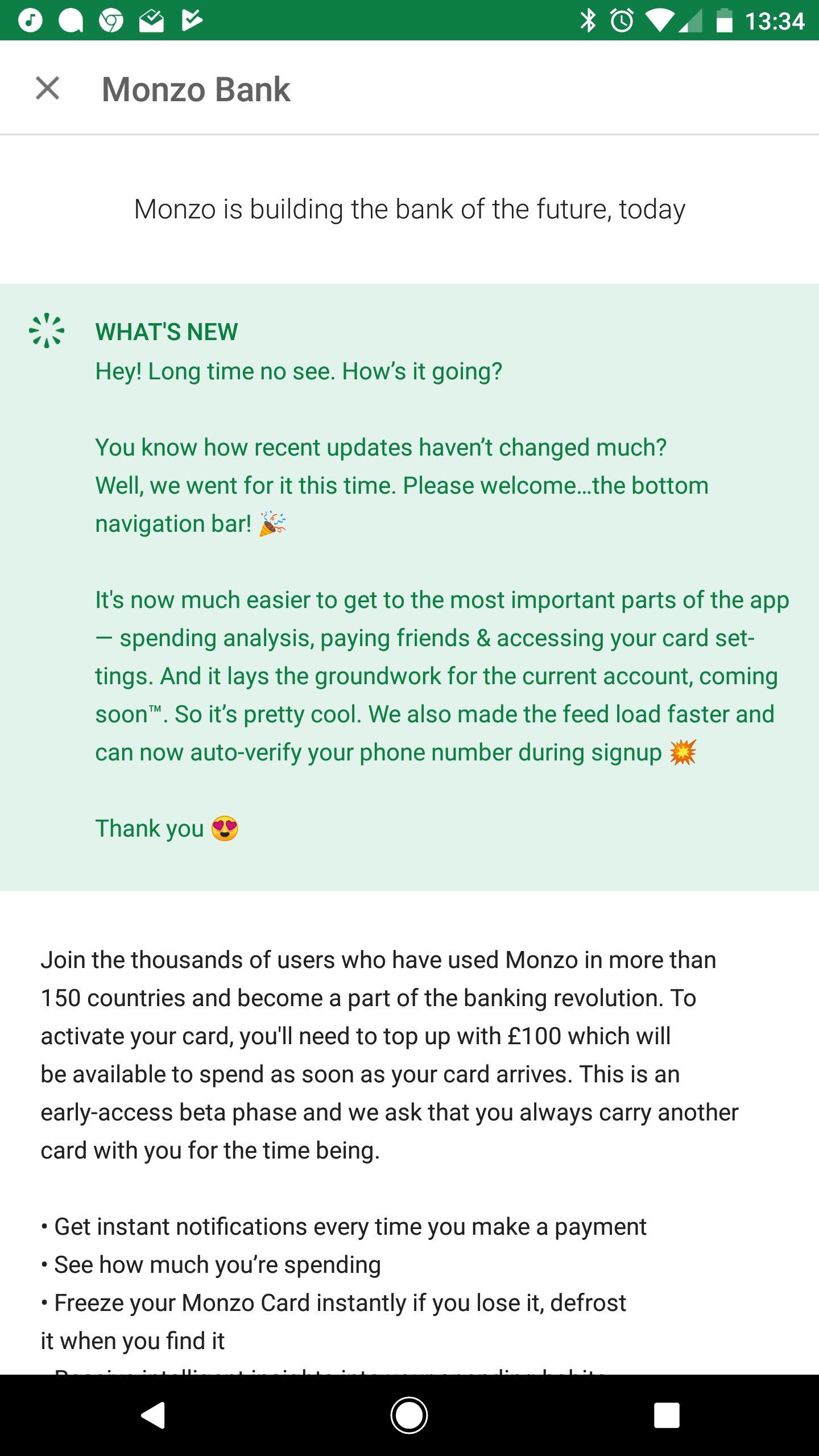 An exciting new change, I’m sure it’ll be hit with uncertainly from some and love from others… But here comes the bottom nav bar!

Thanks for posting updates!

The idea behind this is so that in 6, 12, 18 months… We can look back and see all the progress

(as the changelog just gets overridden each update)

Rubbish 3G on my holiday…

So no screenshot! But it’s the same changelog as 1.9.0

My guess is that the bottom navigation bar has now reached stable?

1.9.1 Screenshot just for the sake of continuity, since @nexusmaniac is impaired by 3G 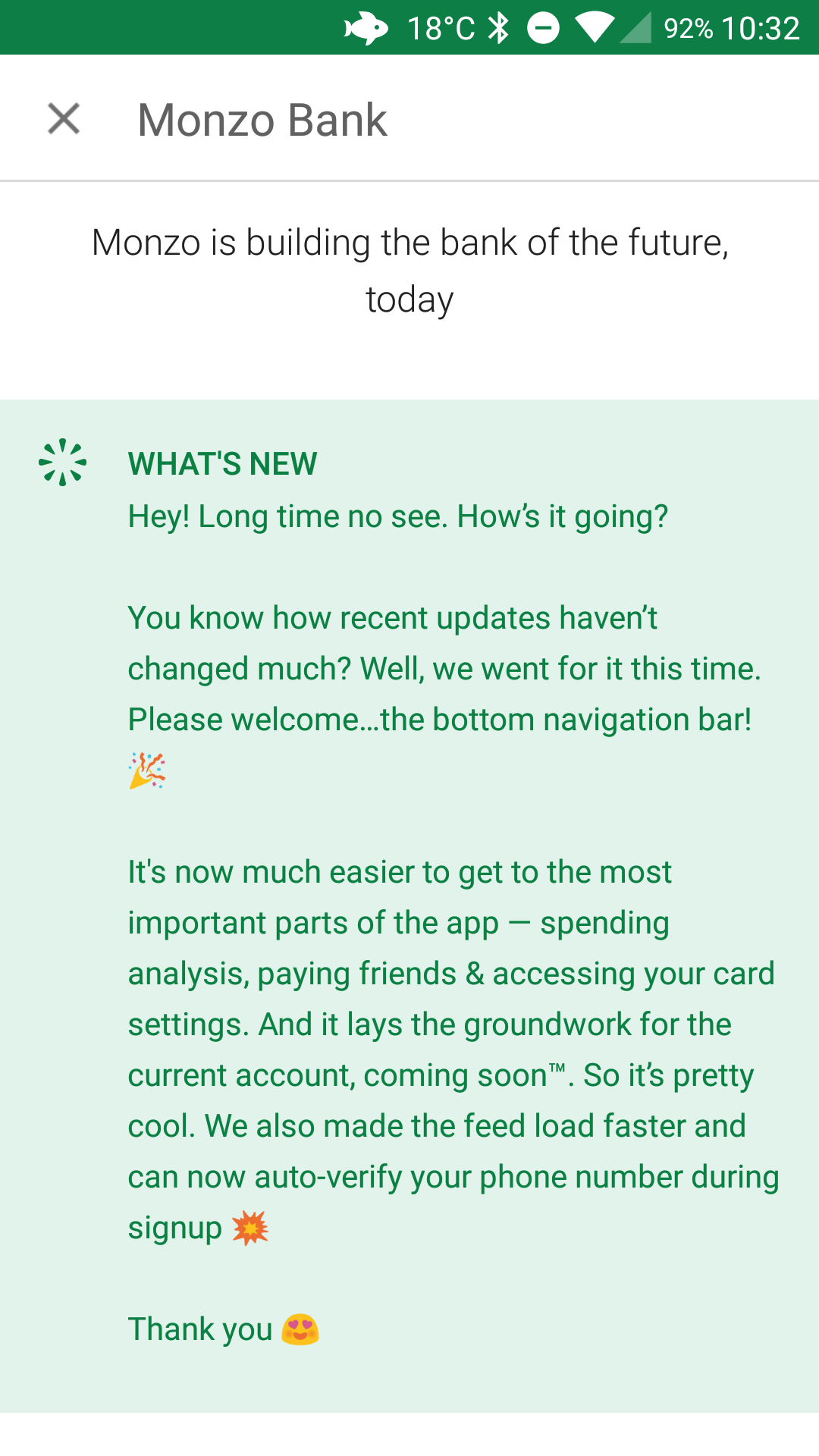 It’s been a while!

Which is a great thing… Why? you might ask? Because it’s clear that the Android team are focusing heavily on the development of the Current Account app! 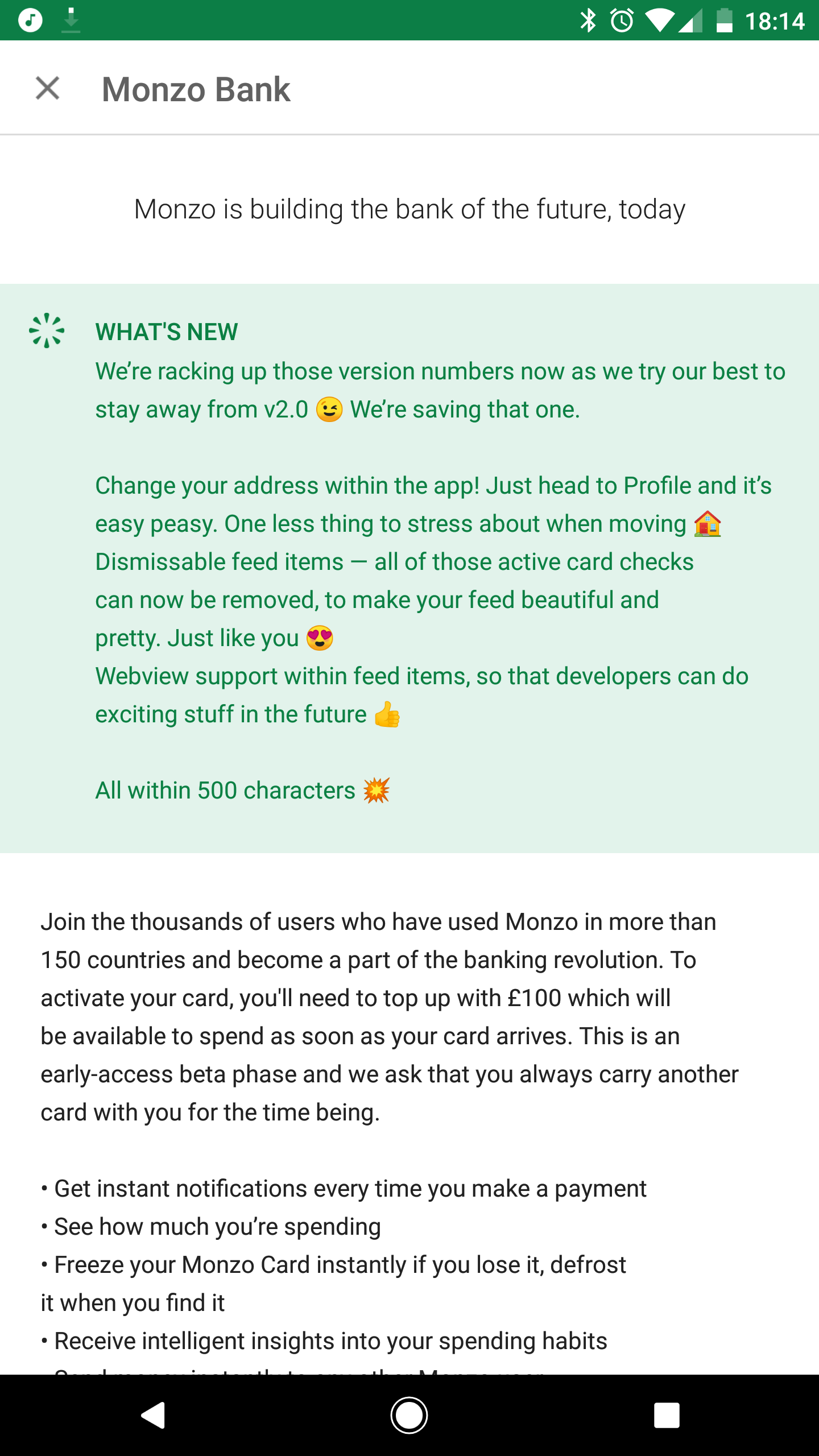 Looks like a fun set of changes, hopefully we’ll be seeing this on the CA app before long 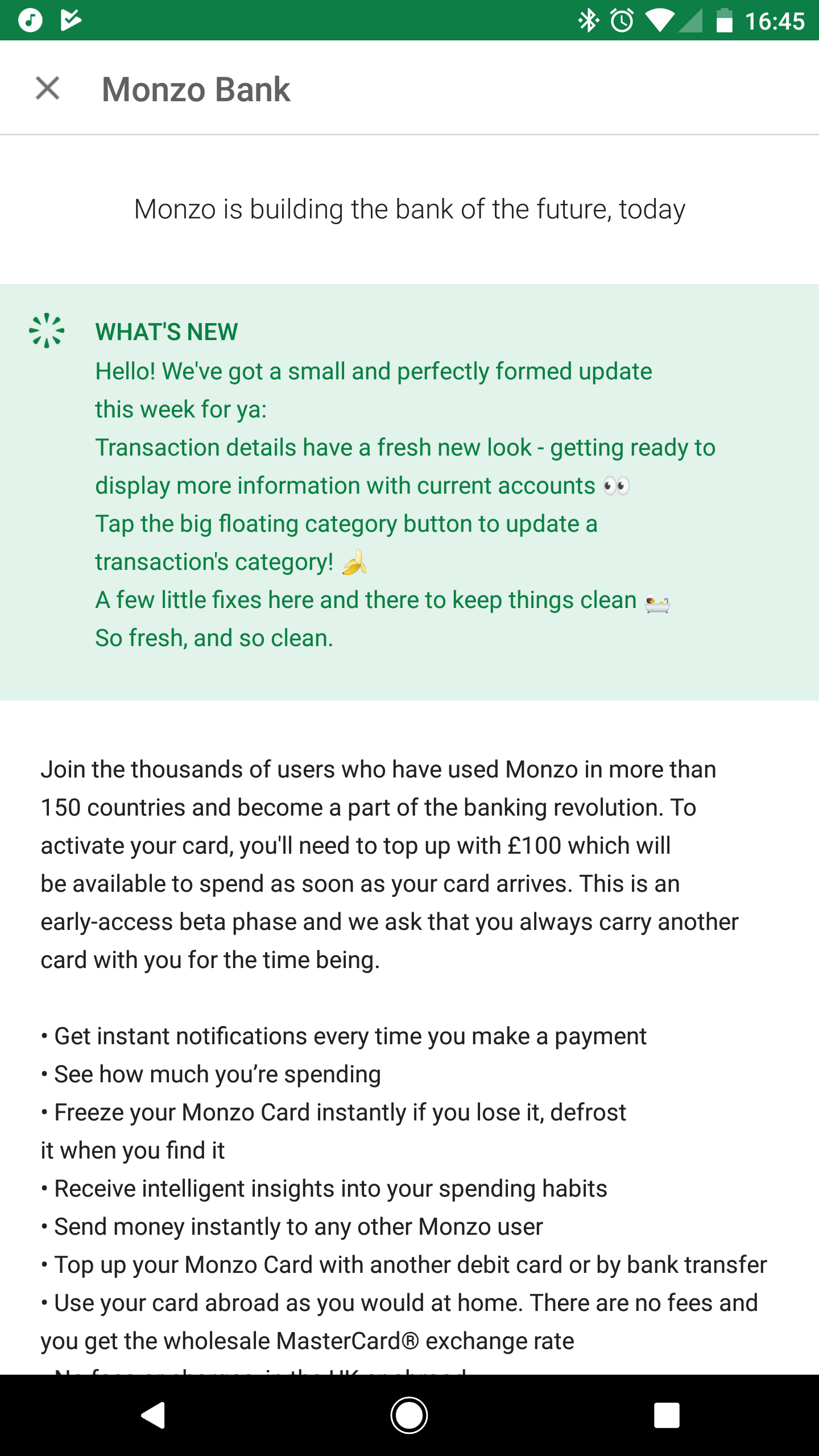 I couldn’t resist showing this lovely change off! (I’m not sure I like the dark brown section at the top for this Amazon purchase? I think it must be pulling colour from the icon somehow?) Anyway…

Looks awesome, the transaction details are laid out in a far nicer way now!

(Old on the left, new on the right)

The only minor gripe I have - because who doesn’t like to nitpick?

- Is that the No. of payments is duplicated, see 42 payments under both “Average Spend” and “Total Spent”. Seems like a strange bit of info to display twice 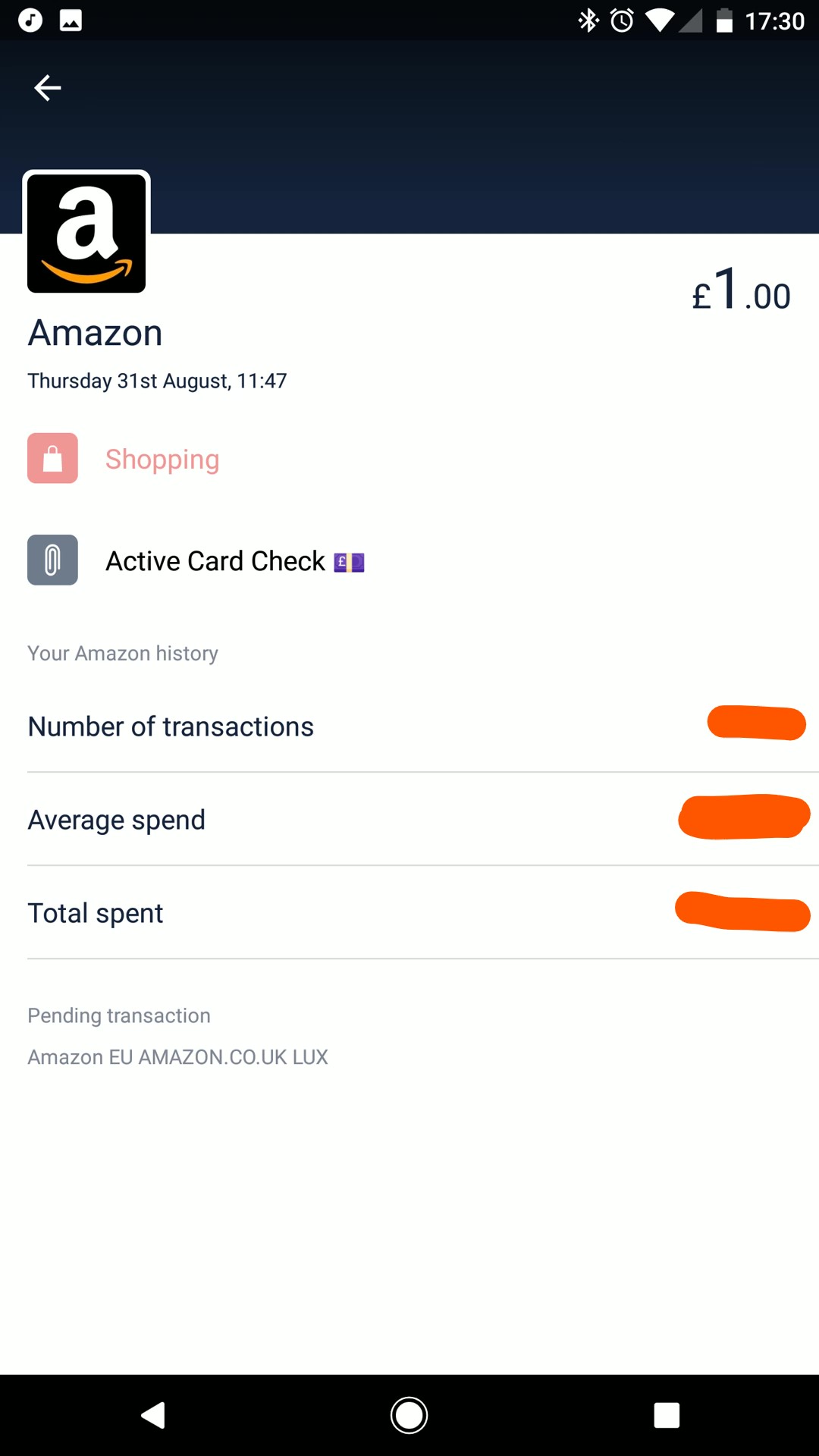 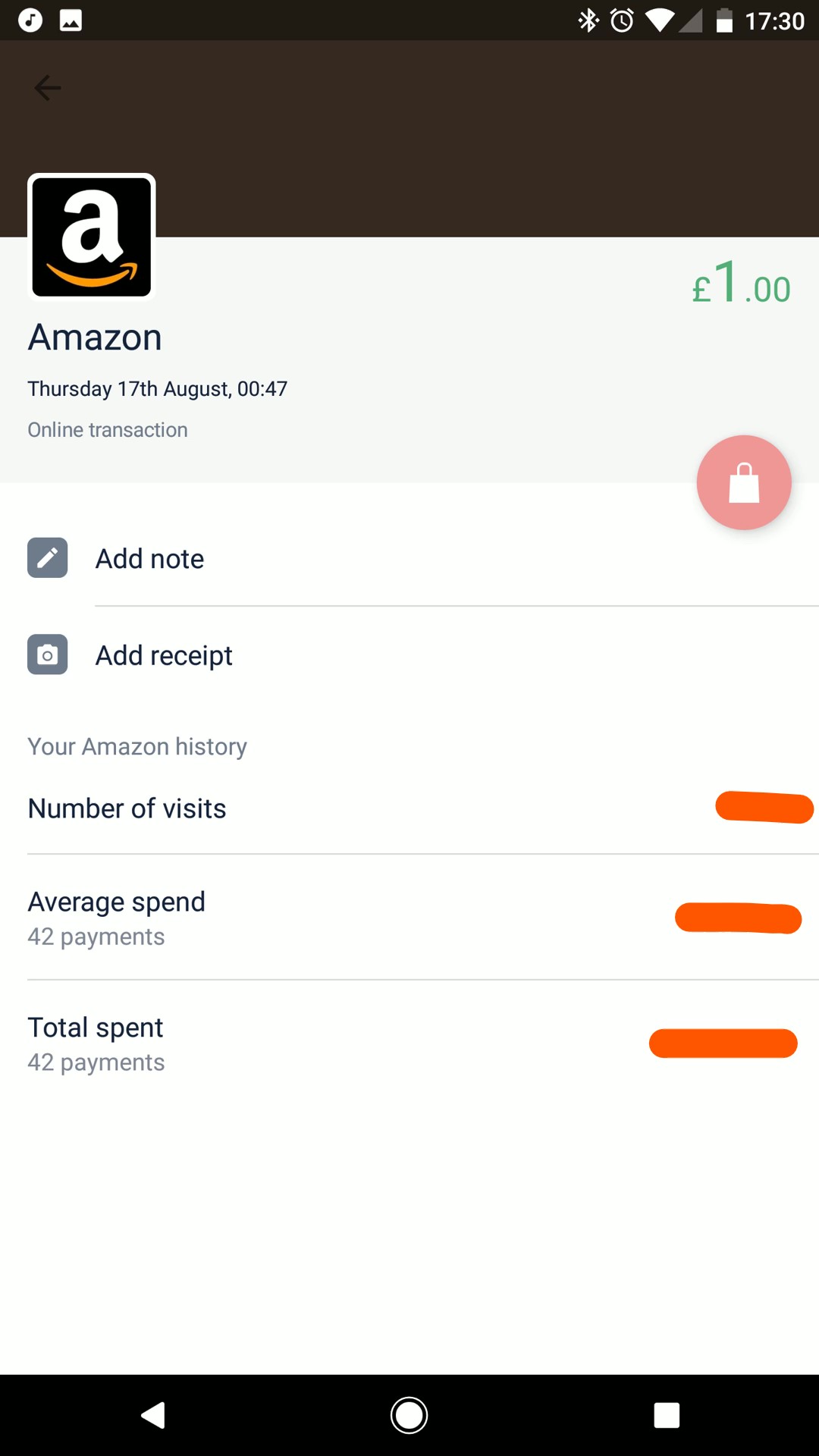 Why has transactions switched to visits?

I’ve never visited TfL, but I’ve travelled on their services. Same goes with Uber. I’ve also never visited my energy provider, nor do I visit their website to pay since it’s a recurring card payment.

Websites kind of makes sense. But not when they split orders into multiple transactions as Amazon does.

And why the difference in tense between Total Spent and Average Spend. Spent suggests it’s complete.