I agree with that to some extent. But what @Revels says above is also true.

A workaround would be to launch Shared Pots (Plus/Premium), which you could share with any number of Monzo users, the shared pots would live under the existing Personal Account - every Monzo user has one. Virtual Cards can be assigned to them - instantly creating spending accounts for partners & kids & social groups. Possible regulatory restrictions ignored.

It hasn’t, that’s my point.

but if you had joint bills with a partner you might think of it differently.

Not a partner, but household bills are shared. Would joint accounts be useful for these? Probably. Are the necessary? We’ve done just fine without.

A workaround would be to launch Shard Pots

Yeah, this is sort of what I’m going for here. It’s certainly a new spin on shared banking that’s underpinned by the modern rethought approach to banking Monzo has taken. I don’t know necessarily if that would mean better, but it’s certainly what we’d use for bills if it existed.

Can you really, though?

I’m not sure if you’re asking the right question. They certainly could. They have the resources to do it. It’s an approach a competitor is looking into. It’s something N26 already do in Europe. It’s the sort of approach I’d expect from a bank trying to redesign and improve upon the paradigms of old. It’s the sort of approach I feel like I want as a user (which calls back to how I remember feeling about personal current accounts when I saw Simple in the US, and then Monzo and Starling came along).

I think what you mean to question (and maybe I’m wrong) is whether it can work in practice. I think it could, but who knows. No one’s really tried to do anything different in the UK yet. Variants in other markets seem to work quite well in those markets from what I’ve seen. It’s those implementations that leave me wanting for similar in the UK, just like how Simple made me feel about current accounts.

To answer your questions from implementations elsewhere and the thinking of Chase from their surveys:

Will one person be able to authorise direct debits from the other person’s account?

The account is shared. The money belongs to everyone sharing it, and they can spend it how they like. So it’s not one person spending from another’s account. Chase distinguish between account creator, and owner. There’s no owner, so no one person owns all the money. There is one creator and they can add and remove people from the account.

Would a person be able to access funds in the account in the event the other person died?

Yes by the very nature of the way it works.

I think anything other than a true joint account is going to be quite complex.

I agree, from the bank’s perspective at least. Done right, for the consumer, they seem much much simpler to set up and use.

Here’s how this works with N26 in Europe: 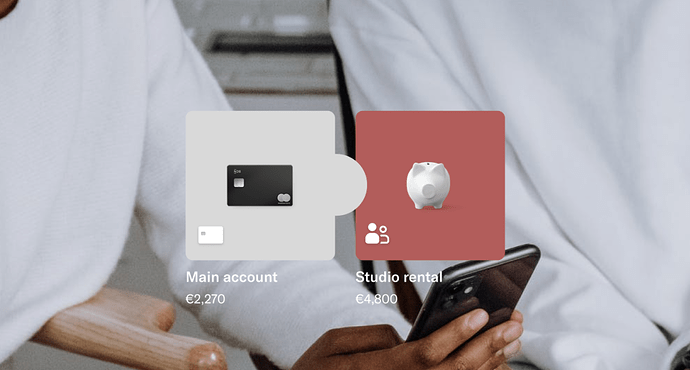 Shared Spaces is the shared banking feature with your N26 bank account. Discover how up to 11 people can manage their money together using sub-accounts.

Who owns the money in Shared Spaces?

In order for multiple users to have full access to the same sub-account and the money within it, Shared Spaces uses a Power of Attorney legal model. This means that the premium account holder that originally created the shared space is the sole owner of the space. They grant Power of Attorney to the other participants, giving them permission to transfer money in and out.

Opening them, for starters. The credit associations can cause complexities. I just think it’s old fashioned, and in the modern day we’d be better served by something else that’s much less rigid.

Can the ‘owner’ withdraw Power of Attorney and keep all the money?

I imagine so, through removing members of the shared space. It’s a new risk, though not entirely, joint accounts are open to the same sort of financial abuse too, and so the same care should be taken when deciding to use them. They’re for people who trust one another implicitly.

For those who like the joint account model, what exactly is the drawback you’re envisioning here that doesn’t exist with joint accounts?

That my partner could lock me out, that’s quite an important one.

Transfers/payments I get notifications for. “Sorry, you can no longer use this account” is far far worse.

For me, the drawback is that only one person owns the money in the account. That is, fundamentally, not how joint accounts should work.

Well, at least with a Joint Account, either party can run off with the money. In your ‘solution’ the risk is always weighted in favour of one particular person.

That’s very interesting. Generally its sounding like one of risk, and you folks feel safer with a joint account.

Either way, it’ll bring something new to the market and I’m down for that. I don’t particularly like that the fintech approach so far has just been to do what everyone else already does but wrap it up in pretty paper. If they’d done that with the standard current account, I don’t think they’d have gotten very far at all.

Based on everything else, they’ll bring joint accounts with issues.

Joint accounts can absolutely be improved upon, but the core needs to be a joint account.

I “feel safer” because the contract between the two parties is safer. Equal. I’m trying, but you still haven’t convinced me that you’re inventing anything ‘better’ here.

I see you’re point, and when it came to my housemate and our bills, Monzo’s shared tabs feature was far superior to a joint account.

But shared banking in relationships is different. Some people make huge financial sacrifices like giving up a well paid job to move closer to their partner, or giving up their job to bring up kids (which likely impacts their future ability to earn as well as their pension), and in these situations finances truly are joint. I don’t see how a shared pot that one person tops up would really cut it.

Each to their own, I guess, but I don’t think monzo should give up on JAs just yet.

Maybe all this stuff about joint accounts should be in its own topic? I feel that it might be dragging this topic away from its original point

Happy to do the honours if y’all stop typing for a minute!

I mean prior to the existence of Monzo, you could have said exactly the same thing about current accounts! In fact I saw it everywhere! We didn’t need Simple because our banking infrastructure was already so far ahead of the Americans. yet here we are nearly 7 million customers later.

I’m trying, but you still haven’t convinced me that you’re inventing anything ‘better’ here.

Maybe because I’m not inventing anything (I’m not even sure which fintech came up with the idea first tbh, but N26 is the one I know most about, and I think is the one I saw first and using as the basis for my posts) or trying to convince anyone that it’s better. I’ve only made an argument for it being something different to what’s currently available, and that I like the idea of it better than I do that of joint accounts.

I’ve split all the discussion of joint accounts out from this topic, as it was starting to swamp this OP a bit:

What would make Monzo the perfect banking experience? Monzo Chat

So for you, what would make Monzo perfect? For me: Cashback on debit card purchases. Better interest on savings accounts. Flex not taking first payment immediately. A full credit card (not flex). Being able to add pictures to contacts for payment. I am full Monzo and keep everything in one place - bills, savings etc and wages paid in. I still think its the best banking experience but just needs a few extra bells and whistles - overall though I love my account.

Don’t think it does really. We’ve only “ruined” the 53rd “what should Monzo do?” thread of the year

Maybe we can merge the other ones in time, or hope they fade, but for now I personally think the discussion of the merits of a joint account is quite an important topic and probably also deserves its own outing

Not sure why this got moved. The question was what would make Monzo perfect; this was my answer