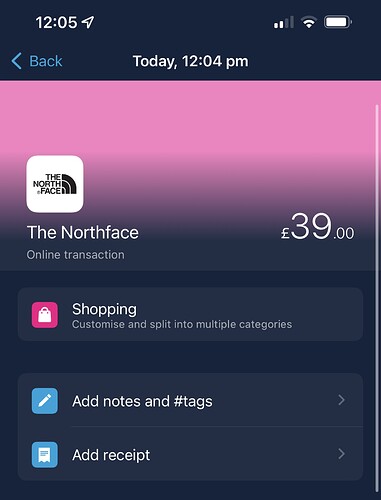 So I purchased so Vans today and it came up as Northface. I use the Apple Pay payment method integrated into Safari to purchase

Any reason the merchant is totally incorrect

I seem to remember Vans are owned by the same company who owns North Face - they own quite a few different outdoor brands including Timberland (can’t remember their name though). I guess they’re using a centralised system to take payments.

Ah yeah that would make sense

Would be nice to be able to differentiate

Just to cross link with Chase topic, the more I use them the more impressed I am with their merchant information.

Not gonna lie the merchant info on Chase is pure black magic. It even got the hospital parking machine and filled it with a parking symbol. Really, really well done. [Screenshot_20220126-164018]

Thanks to the COps who have been beavering away

There has definitely been some steady progress into the backlog this week and even some icon updates!

Just go to their website, see what they’re using on there - set it and lock it. Accept no further requests to modify it.

It’s rare that these logos change because of the costs for the company to update it across everything.

Which I believe is pulled from and set by their website - so it must still be used.

Yup! We’ve seen so many times in this thread people going back and forth changing things, someone else disagrees. Wastes so much time and it never pleases everyone.

Fair play I got to used to the blue version lol

Wow merchant data (small Bristol indie) from 2018 has been updated

Did you resubmit? (Or are the working through everything outstanding in chronological order?

Submitting a request because it’s using an old colour background on a company logo is…such…a…waste of everyone’s time. I bet a load of these are the reason the team is overwhelmed and can’t do things like input a logo where there is none, or fix a totally incorrect name (ie not just “they put www.company.com instead of Company”)

None of mine have been fixed.

Question for people on here: do you submit every wrong merchant? Or just merchants you might go back to (I do the latter).

I used to submit any. The untidy feed used to drive me insane!

Controversial suggestion: but maybe we should only be allowed to submit a correction once we’ve visited the merchant twice?

Every wrong one, but more for completeness and benefit of others more than anything

The desire of Sainsbury’s to continually change the merchant data for every terminal at every branch, even ones I have been to, is my current nemesis. Not Monzo’s fault that one, but I cannot help but feel that there should be a standard system, maybe company registration number or similar

Or you can only submit the same transaction once.

Not allowing to report until you’ve been twice won’t work. Not for the tiny errors but the big problems. I’ve got ones that show as completely different places.

The desire of Sainsbury’s to continually change the merchant data for every terminal at every branch, even ones I have been to, is my current nemesis.

I went to Sainsbury’s today and it’s wrong. The raw data starts with “J Sainsbury” so you’d think this would be something Monzo could automate (ie strip out the text after “J Sainsbury” so it identifies it as the same merchant)