Anyway this merchant data fail is really taking the piss now, this was and always has been The Slug & Lettuce yet all of a sudden it’s some random bar in Copenhagen!!

I really do fail to understand how a place can all of a sudden change to something else, is there no manual checks in place or no system locks once verified?

It really does defeat the point in having instant notifications when you cant even get the locations right! 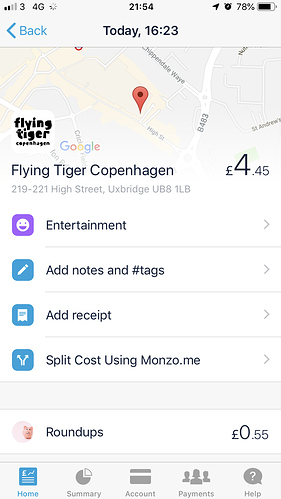 It could be a bloody unicorn ride for all I care mate, this sort of thing is unacceptable especially when we are now 2-3 years in.

Suspect this might be related to varied buisiness using what amounts to (as far as Monzo can see) the same acquirer. Something similar happened to me the other week; I was a pub that wasn’t O’Neills, but all the payments in my feed came through as O’Neills. Reported in in-app at the time, but no updates or changes yet.

I wouldn’t get to worked up about merchant logos. The many independent firms I managed to get changed, just disappeared one day back to their initials.

I have stopped even bothering with submitting changes. Waste. Of. My. Life.

Companies and POS terminals all have different ID numbers just look at Tesco or Sainsburys etc all different so I fail to understand how things can cross over.

But after 2-3 years this should not be happening, it should be fixed and fixed now but Monzo feel it’s more important to focus on #tags etc.

From what I’ve heard there are checks in place to stop this for recognised merchants. As to why it wasn’t in this case I don’t know.

Wetherspoon app transactions also changed the other day for a few hours to some random name and logo.

They are aware it needs improving but it’s not a priority right now.

My personal view is it’s a core product feature and it’s the first thing you notice so it could do with a bit of TLC. I’ve mentioned before with example changes to the system in another thread.
It can be quite alarming for someone to think they may have a fraudulent transaction but it’s just a typo!

I don’t quite understand it myself either, but it clearly happens. Vending machines are a prime example I’ve seen posted here before. In that case it would appear to be because machines at many locations all ultimately transact through head office, so once an edit moves the location away from head office to a machine, it’s a game of musical chairs as edits move it from machine to machine.

Looking at your initial screenshot again, it appears you’ve not been changed to a random bar in Copenhagen but to somewhere in Uxbridge where the company name happens to include the word ‘Copenhagen’.

some random bar in Copenhagen

Flying Tiger Copenhagen is not a bar. It’s a chain of shops sometimes described as a ‘posh Poundland’.

What does the merchant name at the bottom of that screen (if you scroll down) say?

Thanks mate, is there anyway these can be locked to prevent this thing happening again as is really really is annoying?

Vending machines are a prime example I’ve seen posted here before. In that case it would appear to be because machines at many locations all ultimately transact through head office, so once an edit moves the location away from head office to a machine, it’s a game of musical chairs as edits move it from machine to machine.

For these cases I think it would be better if Monzo removed the location for those transactions and showed them like online merchants.

I thought it was a bar given the name tbh I din’t look nor did I want to.

A core feature should be priority

I don’t get where Flying Tiger has come from in this instance. The address is the correct one for the Slug & Lettuce and there isn’t a Flying Tiger in Uxbridge…?

I think it may be an issue with Slug and Lettuce specifically in this case, as I’ve had a transaction that keeps changing multiple times, and is now also showing up as ‘Flying Tiger Copenhagen’ despite the information at the bottom of the transaction screen showing as ‘Slug and Lettuce’

Edit: This is a Slug and Lettuce in a different location too, not in Uxbridge

This bar is one of my locals hence getting annoyed