I clicked on View SECCI and it came up with 10% so I guess it’s not fixed yet.

So technically an overdraft is a long term loan that doesn’t need to be paid back?

Interesting! How many purchases did you select to spread the cost? I selected 2 purchases

‘A bank overdraft is a limit on borrowing on a bank current account. With an overdraft the amount of borrowing may vary on a daily basis. A bank loan is a fixed amount for a fixed term with regular fixed repayments. The interest on a loan tends to be lower than an overdraft.’

Ikea and Apple, you have to select them, its just how the basic demo works, it doesn’t let you venture away from the set slides unfortunately.
Just appears to be images with areas chosen to hyperlink to the next image, simple but cool! 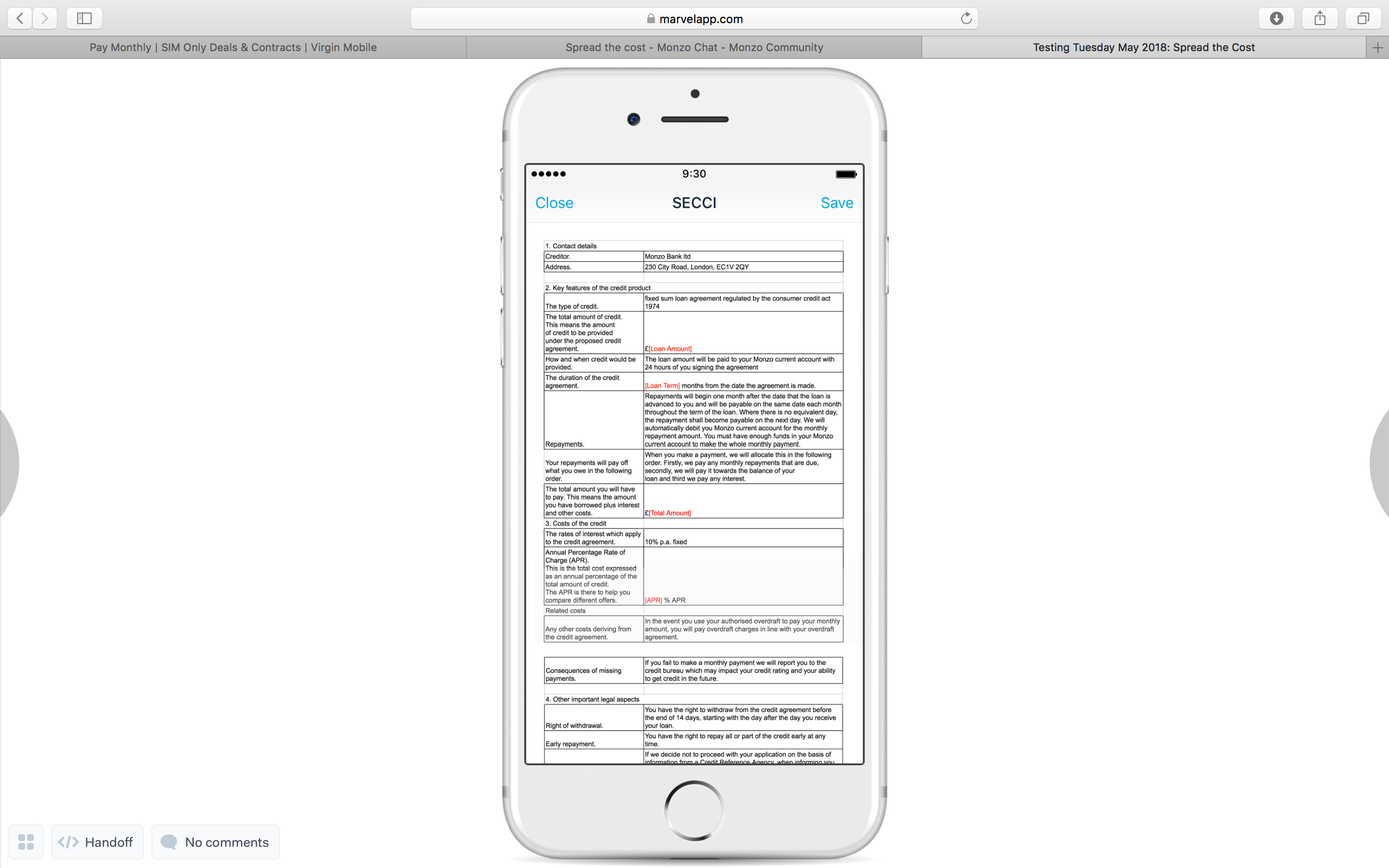 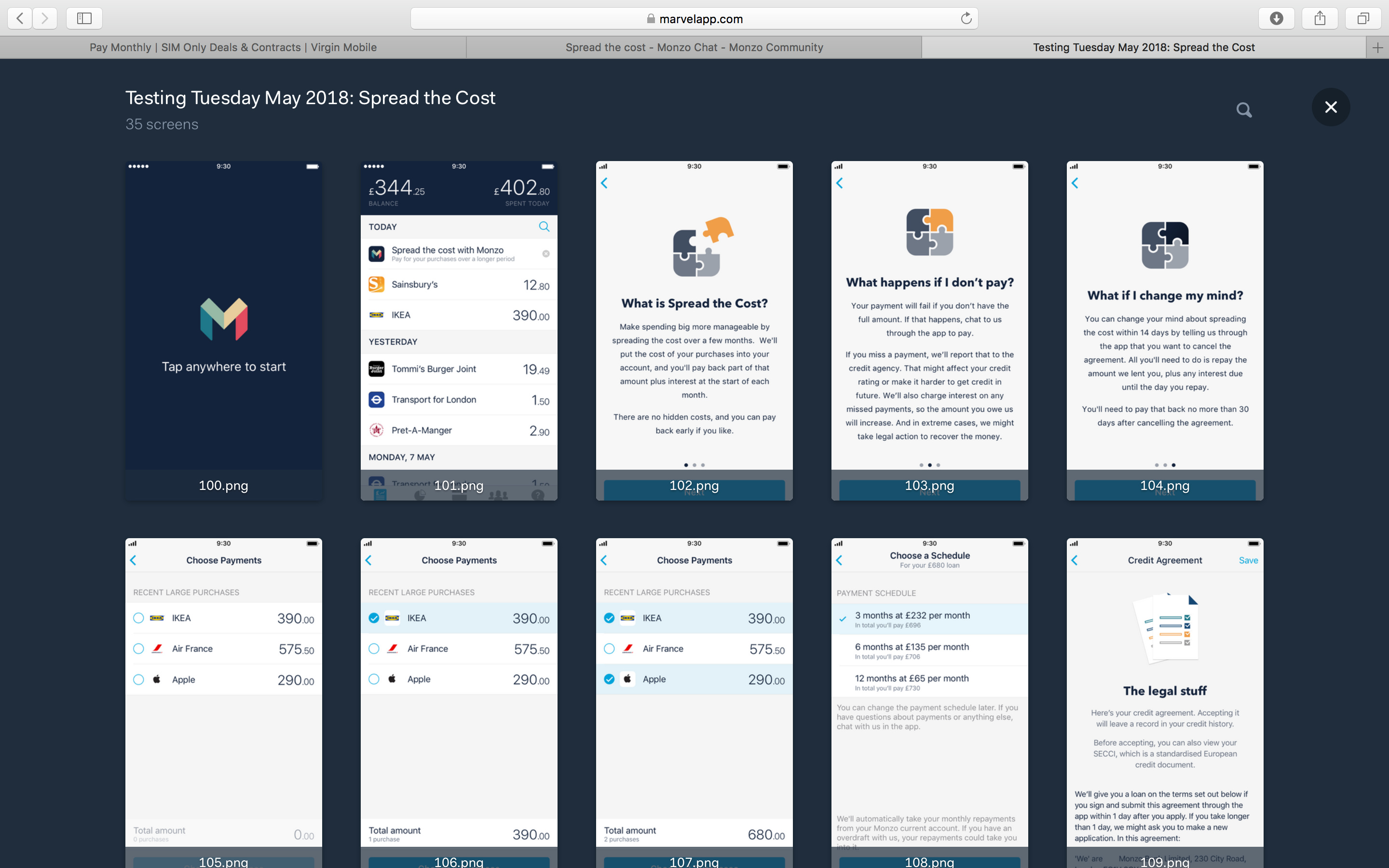 2 Likes
Create an option to log payments as loans and automatically claim it back after a custom amount of time
Jackcrwhitney (Jack) 29 May 2018 21:13 #21

‘A bank overdraft is a limit on borrowing on a bank current account. With an overdraft the amount of borrowing may vary on a daily basis. A bank loan is a fixed amount for a fixed term with regular fixed repayments. The interest on a loan tends to be lower than an overdraft.’

Interesting, I’ve sometimes wondered why one would be used over the other, this is good to know

It should be taught in schools

no wonder… I was clicking everything and nothing was working. Time for me to get rest…

Now that would have been sneaky!

It’s cool to see them following through on the different types of credit product, but it’s the 0% for 1 month that I miss about a credit card when using Monzo!

Just checked labs and there’s nothing

This is different from a credit card because you pay for it first out of your monzo account and later you can spread the cost and get that money back into your account in the form of a loan?

I wonder what the minimum amount users can borrow will be - £200?

I wouldn’t use this really because why would I want to be credit checked every time I wanted to spread the cost? Shouldn’t it be convenient, not odious? No instant decision etc. Also most credit cards don’t incur a fee if paid off in the first month. Nothing about paying off the debt early. Plus I thought Monzo were against charging interest rates? Where is the fixed fee for borrowing?

Now I understand this is a potential feature showcased at an open office, but so many problems with it without even getting into the pushing people into debt who have actually paid it off on a debit card.

Also most credit cards don’t incur a fee if paid off in the first month.

Pretty cool. Nice to see Monzo venturing out into other areas.

Thing is what is the guarantee that you’d get this over say a 0% loan over at Apple?

If it didn’t want multiple checks on your account who would you go for first, Monzo where you have to pay but is your bank so you’d think you’d get some leeway and pass or Apple that is 0% but you don’t wanna pay so would take a chance of passing?

There is the option to overpay. If you keep clicking through the slides.
Regarding the fixed fee. This is just a demo so a lot could change

I assume the repayments would be included in committed spending?

I can see this being a really popular feature with the payday loan types.

A lot of rational people won’t understand why anyone would want to use this. If you’ve never taken out a payday loan or held a balance on a catalogue then the purpose will probably escape you… you have better options like using one of your low Apr credit cards or 0% finance etc.

If however you are like me, you probably don’t have any low Apr products to choose from and the two things you are looking for is simplicity and not getting ripped off. This mock up really hits the nail on the head.

One thing I would be concerned about is whether Monzo would actually open this up to those ‘payday loan types’ at APRs that reflect their true risk without the usury added on top, or is it going to be like the overdraft where only the cream of the crop credit ratings can use the product? If the former then great.