Hi, I just wanted to put this out there as an idea - it would be super cool and useful to quickly access balance updates without going into the Mondo app. An example of this would be the way Tesco Bank have implemented this in the iOS Notification Centre (called Balance Peek).

Obviously have this as an option, disabled as default within the application. 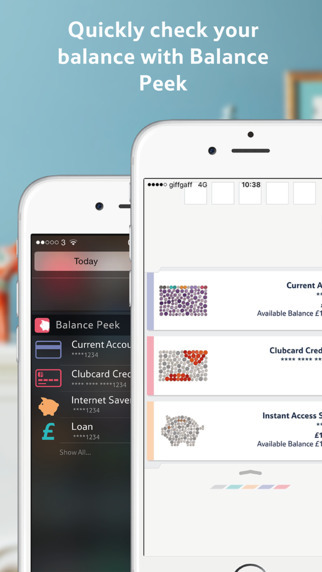 Obviously have this as an option, disabled as default within the application.

No particular need, Today Widgets from third party applications are disabled by default and opt-in. In addition, the phone must be unlocked to add them so not a particularly big security risk while the app has no separate unlock IMO.

I really like the idea though and I see you already posted in the Apple Watch thread, this would effectively be the same feature as the watch glance in a different form/place. I’ll occasionally open the Mondo app to do a balance check while out and waiting to order or pay for something. Though, with Touch ID unlock on the phone and no extra authentication in the app, it’s not a huge deal to me right now. Tesco’s balance peak on the lock screen of their app (gif below) particularly makes sense as I wouldn’t want to be entering in my five digit banking passcode in public all the time, unlocking the whole app and waiting for things to load just to do a quick check.

Hi Richard, that’s a good point - I forgot that the ability to add a new widget was only available after the lock screen. I wonder if with a notification widget you can also have the ability to only view once phone is unlocked (like find my friends widget). For me personally this wouldn’t be an issue, however some would not want their balances accessible from the lock screen.

Agree with you, the feature does sound like something that would coincide with the Apple Watch Glance, as it’s essentially the same thing.

I think for me, Touch ID, Watch Glance & Notification centre widget are top points for a banking app for me personally. As I know each bank offers this, but I haven’t seen one that offers all three so far!

That sounds like a great idea and is something we’ll definitely look into in the future as a way to make access to such useful information quick but still in a secure manner (i.e. only when your device is unlocked).