It feels like they’re banking on people’s laziness to get a few extra bucks.

I am not suggesting they should change the default for everybody, but that they let those who wish to change it to do that.

This is something we’ve thought about and debated internally - There’s pros and cons of different approaches but we’re tracking things carefully - like how many people are reaching the “default to 12” point after at least 24 hours. We don’t want it to be too high.

Ideally we want people thinking about their finances and considering what they can afford for each purchase.

FWIW - Forgetting to pick 3 months and getting charged 1 day of interest (which is less than 50p on a £1,000 purchase) isn’t as bad as forgetting to pay your credit card bill on time and being changed £12 for missing a payment + any interest

There’s pros and cons to every product.

Ideally we want people thinking about their finances and considering what they can afford for each purchase.

Wait you’re saying I shouldn’t be Flexing things based on “oooh shiny new feature , I wonder how this works with Google Sheets”…

This is news indeed.

Thanks for the clarification. I see your point about not wanting to have 3 month as the default, but I don’t see why that can’t be intentionally and knowingly changed by users. It feels a bit paternalistic to not trust one’s users to make that decision for themselves. All my credit cards allow me to choose whether I want to pay minimum or in full, they don’t ask me every transaction or every month. Thank you anyway.

It’s no great hardship to go into the app to alter it, you get a notification anyways when the transaction is done, I’m guessing most people would open the app at this stage to check on the transaction as it is.

You also get a prompt to go back in & update it if you haven’t.

Here’s a weird edge case that has ended up with Monzo effectively paying me a £55 cash advance (that I will eventually need to pay back).

I’m in Jamaica right now and paid for a tour with the hotel. The first transaction declined and I could see it had declined on their sales device, so I let them charge me again expecting one of the two payments to not be collected.

Next day, both transactions completed, so to allow myself to get a bit of the money back into my account, I Flexed the duplicate payment, then disputed it.

A few hours later Monzo refunded the duplicate payment, but it still lives in Flex as a payment plan, essentially meaning I’ve got the money from the transaction refund plus the ⅔ of the transaction value via Flex.

And yes I definitely Flexed the same transaction that I disputed.

I’m not sure how I expected this to be handled, but it definitely wasn’t like this. 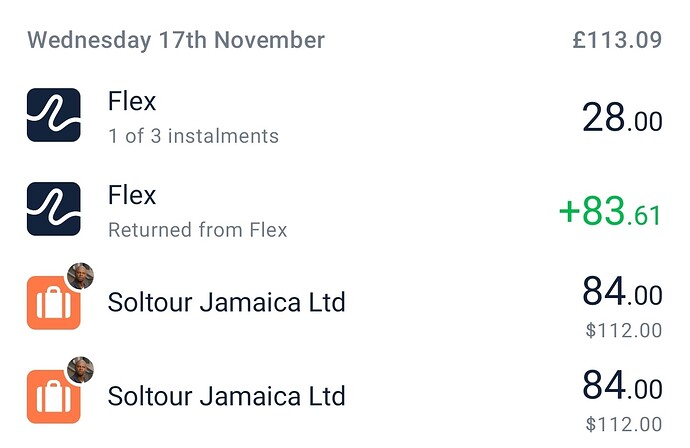 Are you saying that if I do nothing and the transaction defaults to 12 months, and I realise and remember I was meant to choose 3, because that’s not what I would have wanted, I would only be charged interest for that single day it was set to the 12 month plan?

Here’s a weird edge case that has ended up with Monzo effectively paying me a £55 cash advance (that I will eventually need to pay back).

I’ve had this happen when i decided to test it with a Co op order. They charge the cost of your order + 10% to ensure you’d have enough to cover substitutions. So what ends up happening is the transaction settles quite a bit lower, because I get the 10% back plus they don’t charge for missing items that can’t be substituted, so it’s not uncommon for those to settle at sometimes half the initial amount.

I’m curious would happen with these if I pay with Flex. Presumably the instalments would be adjusted to reflect the lower amount owed? What would happen if it eventually settled below £30?

There’s certainly a game-able component to the system here, where you could take advantage of cancellations and refunds to essentially use it as a cash advance. No idea if Monzo would like folk doing that though, but it’s certainly possible in its current implementation. Hard to enforce use here as well, because it’s something that could occur unwittingly as well.

I would only be charged interest for that single day it was set to the 12 month plan?

No - sorry, maybe this wasn’t clear… you’d be charged every day - but if you really didn’t want to pay the interest you just have to make an extra payment to pay off the balance to £0.

Ah, okay! I get you! Thanks for clearing that up!

If I buy something using the Flex card, choose an instalment plan that carries interest, then exercise my right to cancel and get a refund, does this refund go back onto the flex card, or to my current account?

Presumably this would waive any interest that gets accrued during those 14 days, like with a typical BNPL, loan, or credit card payment?

There’s a regulatory reason it defaults to 12

It’s not a regulatory reason AFAIK.

In fact, I suspect the regulators would prefer the default was to put customers on the 0% 3 month term to avoid future problems.

But then you’re putting people in a situation of paying what they can’t afford.

I’ll try and find the post where it was explained.

I remember reading Monzo was told to default to the 12-month plan, so monthly payments would be more affordable.

Sorry I’m being really dim with this - for some reason can’t understand how that would work?

Do you mean, say if I went on Day X to change my plan, down to the 3 month plan, I would be charged interest for all X days the plan was > 3 months?

What do you mean by “an extra payment” in the context? Wouldn’t the instlalments automagically sort themselves?

Currently the behaviour when you change plan tells you what interest you would gain/cost by changing the plan, so I think I’m just mixing up things here?

I think they mean if you’ve accidently ended up on the wrong plan you can pay it off and not suffer lots of interest.

What threw me was the comparison to credit cards and how with those it would be worse.

But after the clearing up I’m inclined to think it’s actually worse! You’re still paying some interest, whereas you wouldn’t if you paid it off on a credit card after a few days. Interest doesn’t start counting until you receive your bill. With Monzo it starts when you make the payment (or choose the payment plan?).

My understanding is you’re free to pay the full transaction off in one payment at any time to end the interest, but I can do the same with a credit card without paying interest, so not sure where the comparison to missed payment fees and more interest charges comes from, because in a fair comparison between the products, those just don’t exist on a credit card in the same scenario we’re discussing: paying the purchase off in full 3 days after making it.

If you forget to Flex, you pay 1/12th and some pence in interest.

If you forget to pay your credit card, you’re charged for the non payment and some pence interest.