A small niggle of mine is that the total month spend in the ‘spending’ tab does not include money received from people. I am sure that there is a search function, but it would be useful to either show the total spend AND the overall money out (I.e including money received, but excluding your own top ups). Or have an option to select which total it shows.

The reason being is me and my partner both use the card, but when we need to split purchases our budgets are all messed up in the total.

I think that might be a bug. It should work exactly how you describe it: total spent should be the sum of all your debits (no top ups) minus credits. Let us check it again. Thanks a lot! 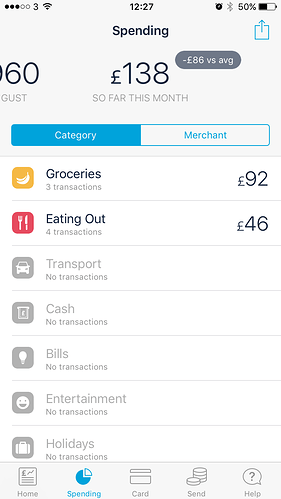 There’s an issue with the cache for the Spending tab not updating, if this was a recent payment, that might explain it…just force close the app & reopen it to refresh the feed.

This has always been the case for me I’m afraid. I always thought that it was just how it functions.

I have to agree with you. I get the same.

It doesn’t reduce my total spent to show the £10 I’ve received. On a side note, I can’t categorise those incomes.

Also second side note, in Categories, it doesn’t show people I’ve paid, but it does in Merchant. I tagged a Monzo-to-Monzo £4 as ‘Eating Out’ but it only displays the payment under Merchant. It includes it in the total spent however.

On a side note, I can’t categorise those incomes.

Yeah, that’s something we need to fix too. We’re about to start working on money requests and bill splitting so we’ll add this to the list. Thanks!

4 Likes
Incoming payment to negate spending
I pay £10 on groceries, partner gives me £5 for their half
Categorising payments sent by other Monzonauts!
Refund allocation 1
Link repayments to outgoing transactions
Target Balance Should Increase when Contacts Repay Me (Bill Splitting)
Crediting Repayments to Targets
Split the Bill (via Monzo.me)
tomsr 8 September 2016 15:19 #8

Lovely! Thanks @hugo. Keep up the amazing work!

Why monthly averages disappeared? So very inconvenient. And I liked how in each category all payments were sorted from largest to smallest, not day by day as they are sorted now. Sad face.

What happened to the comparison with average spending?

We've removed it to simplify things in preparation for the really soon to come Targets feature. Let's see if after the feature is in place you still miss it. If that's the case we'll improve it and bring it back

There’s some more feedback in the post, if your use case for the averages isn’t covered then you should definitely share it

Would also be good if you could offset money received from a friend against a particular purchase, rather than just within the category. You can then see how much that event actually cost you.

Is this effectively how the bill splitting will work when that’s implemented?

Great idea. That would feed nicely into this idea -

It would be nice to add notes to a day so I can quickly see what happened that day and why my spending might be different then normal. For example: One day I go to comic con and spend money on stands, snacks and withdraw cash more than normal. If the day has a note next to it describing what happened that day it’s easier at a quick glance to see why instead of adding notes to all payments on that day.

It could work in a similar way to Google’s Inbox product - which bundles all emails relating to a particular event under a single event. 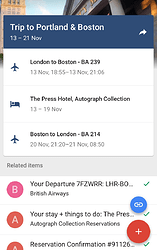 Values could be rolled up to that top level event total.

Also noted you can’t add a note to the money received like you can to your spend. Something that would be covered off if they did what’s mentioned in your linked idea.

Would also be a worthwhile feature to add even before the full grouping function is complete.

It would, it sounds like this may be enabled at the same time as the bill splitting feature, that’s next up on the roadmap

Yeah, that's something we need to fix too. We're about to start working on money requests and bill splitting so we'll add this to the list. Thanks!

So to clarify, should the monthly total spent be the sum of all debits minus credits?

When the sending money feature was released on android I tried it out and the money I received wasn’t included, which I find a bit annoying.

I used the app to chat to Monzo and they confirmed that it isn’t a bug and isn’t supposed to be included but this post here is saying the opposite?

So to clarify, should the monthly total spent be the sum of all debits minus credits?

That would make sense for the total monthly spend but not the individual category totals which I would expect to be the sum of all debits only, for now, since credits can’t be categorised.

I used the app to chat to Monzo and they confirmed that it isn’t a bug and isn’t supposed to be included but this post here is saying the opposite?

It should work exactly how you describe it: total spent should be the sum of all your debits (no top ups) minus credits.

Could you please clarify where you’re seeing the monthly total spent (I would have assumed Targets but that feature’s not available yet for Android)? I’ll check to see what happens when I receive a payment on iOS using Monzo.me, to see whether this is an Android specific issue.

That would make sense for the total monthly spend but not the individual category totals which I would expect to be the sum of all debits only, for now, since credits can’t be categorised.

Credits can be categorised, can’t they? Somebody send me money through Monzo and I am able to change the category, which is why I was expecting it to be taken away from the monthly total for that category.

The monthly total spent I’m talking about is under the spending tab.

Credits can be categorised, can’t they?

Are you sure about that?

I can’t see a way to categorise them…

Just to confirm, credits (from Monzo.me) don’t reduce the total spent on iOS either.

I can’t see a way to categorise them

iTunes refunds can be

I’ve also got Eating Out items refunded when something went wrong with the terminal and it shows a 2 credits and 2 debits for the same amount.

Do you know whether those refunds were deducted from your total spend?