So from all the helpful comments on here, I’m torn between getting a Wi-Fi 5 system of try and wait with what we have until Black Friday and get a Wi-Fi 6. I think I’ve wittled it down to the Deco M5 if I get WiFi 5: https://amzn.eu/d/grWI8er

Reasoning is I went from M4 to S4 as it turned out S4 was basically the new M4 and cheaper, then established the M5 is quite a bit more compact which I like and will get away with the Mrs a bit better but outperform the S4 for not too much more.

As for Wi-Fi 6, I’ve whittled down but still too many choices and I’m not sure what to go with, I guess would have to see what the deals are, but the choices are:
Eero 6
Deco X50
D-Link Covr

Long story short, still not sure what way to go. And still tempted by the Ubiquiti Router which doesn’t help

Could just trial and then return if none are successful

That’s the same brand as the router so if I’ve got the right thing they should work?

I’ve no experience with those unfortunately so I couldn’t say. Generally though (and I imagine in most cases) you don’t need repeaters to be the same brand as your router

Powerline tech is just plain cool, and it makes a lot of sense too. I don’t know why more mesh systems don’t jump on board with it.

It is but there are too many factors that can make it not so great. I tried this at my house and it was terrible.

I’d go with a mesh system any day

This is the dream though. Throw a switch in the attic and run some cables down

easier said than done though

Ended up ordering a pair of these so

Not going to plan at all. Should have done more reading.

Supplied Ethernet cable is 1 metre and first extender needs connecting to existing router. Didn’t realise this, thought one would be in the lounge and one in the bedroom. So even though I’ve already got adequate Wi-Fi in the middle of the building it looks like I need 3 extenders ?

The other problem in this old house is electrical sockets - there’s only 1 each side of the hallway where the phone socket is and the phone socket is halfway between them. Tried a multi point adapter but it’s too close to the wall. So I need to get an electrician to do the work.

Slightly annoying because the router is mesh capable - but only with their repeaters.

Today's average household uses about nine wireless devices, ranging from smartphone to tablet all the way to smart TVs. Master all the challenges using the new generation of WiFi with wireless FRITZ! products featuring Mesh convenience.

Tried the Linksys and it can’t see them. So need to work out if an electrician and another expander from Linksys is going to be cheaper than repeaters from Fritz!Box.

Well I’ve got one set up. 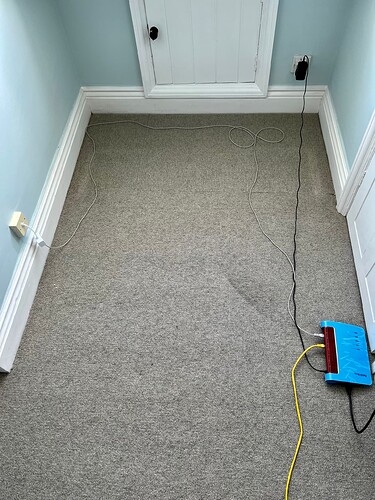 I’ve been thinking a lot about placement of mesh points and cables etc (I hate cables on show) and in doing so I have started to move away from the idea of the out of the box mesh systems and go with these instead:

The reason being for this is the main Starlink router is in the Summer House/Office with an underground ethernet cable going to an ethernet socket I installed in the house. Currently there’s a rather naff router plugged into it to give the house signal but I’m thinking if I plug in a POE Switch and then I only need to send one cable to each point in the house i want one of these, I’m confident in a chasing a backbox into the wall as I’ve done it for plug sockets, i think these will be barely noticeable when installed next to plug sockets and better yet won’t take up a plug socket.

Does anybody with knowledge than me see any potential flaws here??

I would plan to put one next to the switch, one on the other side of the interior brick wall next to the switch which would be the kitchen and then one in the landing next to a lower level plug socket, i think for this i’d run the cable outside and up the wall and then back in again.

To be honest I wouldnt buy anything without Wifi 6 (or better 6E but it can wait given the devices that support it)
In walls work well enough and as long as your POE switch has a proper POE budget your plan can work.

I dont like mesh systems without it being hard wired personally unless you have no choice and I would personally try and get on that uses 6E as the backhaul between meshes if possible as it wont affect 5Ghz speeds and bands.

Thanks for the advice

6E as the backhaul between meshes

Do you know of any systems you’d recommend here?

Moving into my new place soon which has FTTP.

Very annoying no offers at the moment when in a few months it will be the same thing I have now for cheaper.

@l33t will probably have some enterprise/prosumer recommendations for you, but on the consumer side of things, Eero would be my choice out of systems I know support 6E.

Brace yourself for the price of the 3 pack before you click the link. 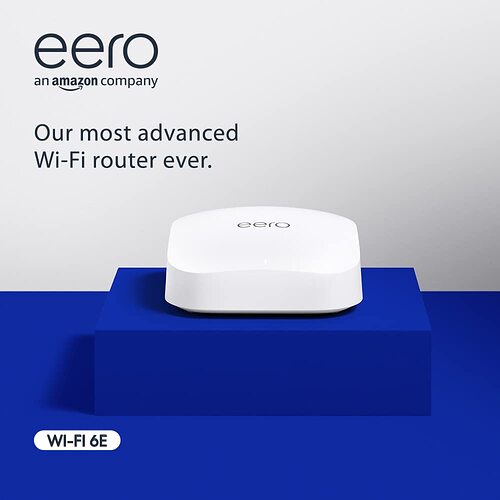 You’ll not need* a new system for well over a decade, assuming they adopt the new smart home standards via a firmware update, and I don’t see why they wouldn’t. This is as future proof as you get for mesh networking right now.

*need is relative. But I’m thinking of a typical user who bought a 802.11ac wireless router in 2014, which is still sufficient in today’s world for most people.

As you say, its future proof but way overkill for most needs. A google mesh system is way more than enough for most people.

Although I have a mesh system with a dedicated back haul (Linksys Velop), aI haven’t heard many people complaining about issues with systems without them.

Being on the ‘bleeding edge’ of tech and getting a 6e system is a mixed bag too. You’d probably be better off just going with something more consumer level and then upgrading in five years time, that’s the usual way tech works. However for the ‘must have the best’ people 6e is the way (and we thank those people for their service in funding the development of cheaper systems which will come our way later

I looked at it on Prime Day. But couldn’t justify the extra £370 over a regular Eero 6 three pack.

@l33t will probably have some enterprise/prosumer recommendations for you, but on the consumer side of things, Eero would be my choice out of systems I know support 6E.

Yeah Eero gets usually decent reviews but I have not used it myself. I know a few with google mesh and to be honest they had more issues than they should and when they talked to me it personally sounded terrible.

I, myself prefer the prosumer sort of devices, currently I have a bit over £1400 worth of Unifi kit and its decent enough for the price. Unifi is good but it has its own issues. If you just get the AP’s (which I presume is what you would) you would need to hard wire as they dont have dedicated back haul for mesh. It does mesh but its not trying to be a pure mesh system, unifi do their amplify alien range for that and they may be an option over the Eeros but I have not looked at reviews of the newest version.

I went to unifi from running Ruckus which was the best wifi ap I have used (for its time, its old now) but you really really needed to know how to tune the wifi and the terminology to enjoy all the benefits.

If you went unifi you would need to ideally get a Pi and run the controller software on it to manage things if your using multiple ap’s which would add to the cost, you can get their cloud key (ensure its 2nd gen) to do it but its overkill unless you are going to use their cameras. They do have a UDR and UDM (non pro) that are all in one with the controllers and they would actually do as a starting point given the non FTTP speeds of Starlink but the stock is the biggest issue. There is EU stock of the UDR fairly often lately but it goes very very fast.
The UDM Pro/SE would probably be overkill given your speeds until you were full FTTP.

The Omada stuff is supposed to be decent enough especially for the price but their AP’s are HUGE in physical size but I would definitely at least get it with Wifi 6 at a min and they do offer a nice admin system which is kind of a rip off of the old unifi interface.

6E is nice but few devices have it yet but it does mean you will get the benefits when you do get 6E stuff and for mesh rather than hard linked 6E can be very useful, for end devices you can get full 1GB speeds but the 6E AP’s (Unifi has only one model) can be expensive and you dont have the net speed to get full advantage unless its for mesh/backhaul which you may not need given the hard wire.

*need is relative. But I’m thinking of a typical user who bought a 802.11ac wireless router in 2014, which is still sufficient in today’s world for most people.

Yeah old AC is okay for most on FTTC speeds, anything higher though it can have issues and IoT can really crap out wifi speeds with the older devices.

So basically figure out how many AP’s you would want and what your ideal realistic budget is and what your top line budget is and we can work from there. Also if you are keen for the technical side or only want minimal control but simpler roll out. At least you plan to hard wire and that is a big plus and POE can/would power them.
Given you wont have 1GB sort of speeds it does make it simpler but if you plan to use a lot of devices or transfer internally such as a local plex server etc wifi can make a huge difference.

If I was wanting a simple solution I would probably be tending toward Eeros because its more capable than google wifi and you can get decent deals on prime day etc. This is before we get to the whole google killing older devices just because issue.

@N26throwaway Oh on a note the UDM SE does still have PPPoE speed issues now I have FTTP 900mb, my old Edgerouter with hardware pppoe gets full speed but everything off (IDS etc) the SE is lesser sadly.

I get the repeater from zen at £7.99 a month. It solved the problem of my youngest complaining that the WiFi was crap in his room

Slightly annoying because the router is mesh capable - but only with their repeaters.

Disappointing that AVM don’t appear to support the EasyMesh WiFi standard which enables mesh systems from different manufacturers to work together.