Exactly why we build it!

If anyone did manage to get this far down

Then here is my referral link

Any update on the universe of stocks that can be traded when freetrade goes beta?

Too many referral links so had to just choose a random one!

Here is my link if anyone is interested - https://freetrade.io/?kid=HD465

Been in Queue for ages over 2 weeks

seem to be moving backwards, anyone want to help me?

This is the universe of stocks we’ll roll out the private beta with:

We are happy to add a few more! Suggest anything you’d want to trade here, and we’ll see if we can include them.

We’ll iteratively add more securities based on user feedback as we roll out and beyond.

I wanted to give you guys a sneak peek (and I hope it’s allowed here).

We’ve been working on a fresh user interface that’s in line with the latest iOS 11 release. You might have caught the big announcement from the Steve Jobs Theatre (there are UI changes throughout the operating system).

Here’s a preview of how it looks: 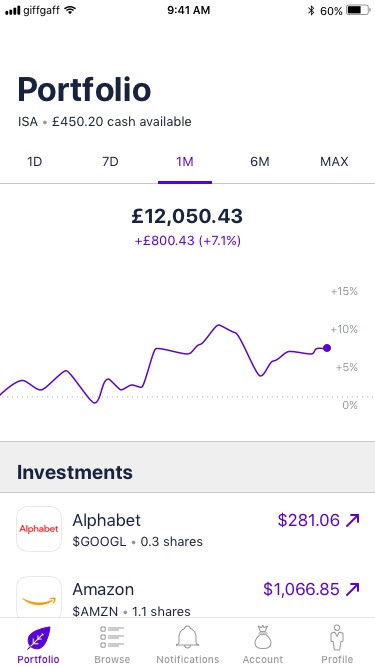 Any news on when rollouts will happen faster? I been in queue for couple of weeks and still number 12.7k

Nice and clean, looks just like the app store

The app is currently rolled out only to the team for alpha testing. That’s why you haven’t seen that number change.

We expect to start the private beta roll-out in a number of months (rather than weeks), as we need a few important things in place to open client accounts, e.g. our authorisation, which is pretty similar to how Monzo needed a full unrestricted banking license to “be” a bank.

(There is not really an equivalent to top-up cards in the stockbroker world, so we can only start onboarding people with our version of the fully-fledged “current accounts”, which requires a number of things in place - that’s why it takes time. OK, I forced this analogy to banking far enough.

So, months of wait are ahead before you see your number change due to people ahead of you being onboarded, but it will be worth it!

Freetrade is a challenger stockbroker that will be “full-stack” both from the tech and the stockbroking perspective. We’re going deep to meaningfully change the current situation.

I hope someone will remove Adam (our CEO) from his #1 position. He referred a lot of people though (around 100).

Do I get a prize if I manage it?

Well, you should, and it should be something on top of being the first user to get that download link.

What would be the right prize for such an enormous achievement?

We’ve been talking about free premium services (e.g. ISA), but suggestions are welcome.

Launch a fund and name it after the victor

or some in app credit would be nice

Currently at #16, tell Adam I’m coming for him

Launch a fund and name it after the victor

What would the fund contain?

A weighted index of all Freetrade users’ stock picks? (Although we can’t do anything like our own funds, still it’s interesting to explore this idea.)

We could include some choice easter eggs as well. See e.g. these subtitles - there are a few there already.

some in app credit would be nice

Definitely. It’s one of the main ideas we have.

tell Adam I’m coming for him

Done! He sits right next to me. He seems slightly worried.

Interesting! Currently at 324. If anyone wants to help bump me up the list, then the link is https://freetrade.io/?kid=HDWGK