I kind of object to being charged for allowing my son pocket money, especially over £30 for a year. That’s about the cost of a day out too our favourite places.

Fair enough, just a suggestion as a solution to the Santander being closed on a Sunday and having to use a book to take money. The amount for a year for a decent app and card, and not having to visit a branch to withdraw seems reasonable to me, but as you say that’s a day out somewhere nice. I’d certainly be looking at normal debit accounts without fee when my son is 11. Monzo might actually do 11-15 accounts by then.

Rooster is another one which has just added a card option, but that £25 year. You are getting lots of added bits teaching responsible spending/saving and rewards etc. For £2 month it seems quite fine to me, but if you don’t need all the other stuff then it could be a waste of money. 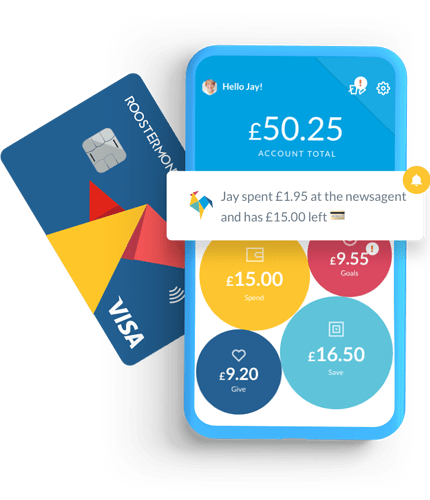 It’s worth pointing out, then, that the only context Monzo have ever discussed this in is one of a paid-for Family account. Thus, if this ever happens and that discussion holds true, Monzo will also be charging for this sort of thing.

I doubt there’s much money to be made from kids accounts.

I doubt there’s much money to be made from kids accounts.

Possibly not, but it’s the chance to gain a loyal lifetime customer if done right.

The issue I see is lifetime customer is no longer a thing. Already this generation are swapping to whatever is best, and having multiple accounts. People going to get more tech/financial savvy.

It used to be stick with bank your parents chose as that must be the best, and before Cass it was a right kerfuffle trying to move banks.

Monzo would have to be the best to keep that kid > adult account.

Even at the moment with Monzo I could swap to another and get the same experience (or better). The legacies are already closing in fast with the USP especially Barclays.

Given that money-muling has been in the news a lot recently, it would be good to have a feature on kids’ accounts, where any credits get notified to the responsible adult first, who can then choose whether to ‘accept’ the credit to the child’s account, or to ‘reject and bounce’ it back to the payee (and optionally also report it as suspicious at the same time). Once a payment is accepted, the child sees it in their account.

If it’s rejected, they get a notification telling them that “Dad rejected a payment from A. B. Scammer for £3000”, prompting a conversation about what’s going on.

I may be looking at things too simplistically, but all a kids account really needs to be is a stripped back version of Monzo as it is.
For example:
Prepaid card
No overdraft (obviously)
No need for the marketplace (except maybe for savings)

All of the other features would probably be of benefit, such as instant notifications, savings pots, etc.

Having the card linked to the parents’ account would provide a safety net, but if the kids were to be able to access their account through their own dedicated app, it would also give them a sense of independence.

The new carousel style of the app really does lend itself to have a managed junior style account under the banner of the main account.

I think this would be a great leap for Monzo and a real quick, easy cash win.

What I’d like for my under 16s is basically what I had with Monzo before it went to current accounts - so a prepayment card, with chip&pin and contactless payment (and no name on). It was perfect for my elderly grandmother with dimentia. I opened the account and handed her the card, set up with her old pin number that she could remember. I loaded her own money into it each week, but only a sensible amount (as she had begun to buy the exact same things 3 times a week, forgetting she’d already bought them) to prevent her over spending. She never knew she was using a different account and she was able to feel like she was retaining her independence (as opposed to resenting me controlling her money).
It’s the same for my children… I want to be able to teach them HOW to bank well from early on and Monzo makes that so easy with its pots. Why can we not just have the option of a prepayment card (linked if necessary to our current accounts).
A Monzo answer would be lovely to hear on this one…

I have a starling account too, that I don’t really use much, but over lockdown they introduced a ‘helpers’ account that basically is a pot with its own card, but without it being named, so that it could be handed to someone to do shopping for you without having to hand them your main bank card. Something like this could surely be set up for kids accounts too - and if Starling can do it… (it’s basically a separate card, linked to a specified pot for payments to go through). It can’t be linked to Google pay though, so no risk of excessive spending. Also no ‘frills’ - it’s simply a contactless payment card.

I’d like to see a junior account facility from Monzo similar to what’s available from Revolt and GoHenry.

It would be a nice addition to Monzo Plus…

You marked it as done, but it hasn’t been added yet

This has been discussed previously here;

It would be convenient to open an child account to give pocket money and monitor child’s spending.

Cast your vote on that topic - there are 128 votes so far and it is 12th in the ‘voted for feature’ table at this point.

Dunno if it would be part of Plus but I can see it as an Add-on kinda thing with a monthly cost.

My daughters just about to start secondary school and it would be really useful if we could just give her a card of some kind with an easy way for us to add money to it for her to use for small purchases. It’s such a shame monzo is 16+. It mean I’ll have to sign up with another provider which is less than perfect

I got my first kids piggy bank account with Barclays. 30 years later I was still using Barclays!. Just think of the customers you could be losing!

This has been suggested before, you can vote for it here…

It would be convenient to open an child account to give pocket money and monitor child’s spending.

when I was a lad…

ha ha, honestly think it’s a great idea and actually a safer way of rationing spends for kids in what aren’t as innocent times. if cards could link to pots that could even be one easy way of managing it?

I have a similar story BTW. opened a ‘school bank’ account and literally nothing has changed in that account from then to now… much to the banks ire I suppose but it’s where every single penny I’ve ever earned has arrived (id never really thought of it like that before - almost sentimental)