I am waiting for a refund of my recent heating oil purchase and a re-charge for the correct amount (as the tank fit less than I bought).

I bought the oil on Chase. Since Friday, my Chase balance has gone up by the amount of the original transaction, so I thought they refunded me, but there is no refund transaction showing. Any other bank I’ve used, I am fairly certain this has never happened - if a refund came through, I saw the transaction and the balance update at the same time. The way Chase are doing it is very misleading.

Has anyone noticed this before with Chase or any other bank?

Sometimes they will amend the original transaction for an amount instead of a new entry. Aka a presentment.

They may charge you the alt price either to the same, or a new transaction for reference on their part.

Sometimes they will amend the original transaction for an amount instead of a new entry.

Yes I thought that, but the original transaction remains visible on my transaction list, unchanged

The way Chase are doing it is very misleading.

I think others might do it like this too. I’ve certainly seen this with First Direct, where they’ll charge you the initial amount and (let’s say it changes) go back and update the original transaction to whatever the right amount is/

go back and update the original transaction

I don’t even know how their IT system can allow that to happen!

(I mean, surely there is an invisible-to-the-customer transaction in their system that causes the balance to be what it is, it’s just bad design to do it this way where the customer sees incoherent information)

No that’s what I mean. I’ve had it (with transport for example) and it goes like this (made up numbers)

You don’t see it very often with the fintech banks, occasionally Monzo does just show it as the actual amount, or the updated/revised amount.

I guess my transaction is at this step, however:

I am guessing Chase’s UI regarding pending transactions is lacking and the actual transaction is either still pending and will be changed, or is actually cleared, has been refunded in the background but for some reason this is not shown to the end user.

Have you asked Chase?

Have you downloaded a statement? That should give you the definitive status of your current cleared balance without all the hidden pending stuff which neobanks obscure.

Have you asked Chase?

Not yet, it’s not urgent and I don’t want to waste time waiting on the chat. I find forum people with varied experiences offer a much better insight; it’s more useful to know if it’s happened to others, what others who may know better think etc.

Of course if it stays unresolved for a few more days I will have a go at the chat to see what’s up.

Have you downloaded a statement?

No January statement yet, unless it’s in a different area of the app (the ‘see statements’ option only goes up to December).

good to see that they have confirmation of payee working now.

Yeah they’ve had that for a few months now.

What page is that on the website though, I can’t find this page anywhere.

Interesting you can opt out of confirmation of payee: 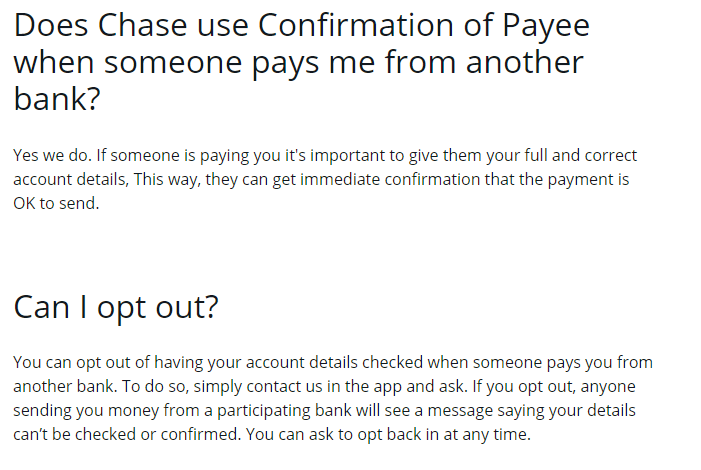 Wonder if Monzo allows that

It was an email sent today.

This seems dangerous to me.

I can understand that I don’t want the checks on, I’m confident I’m paying the right person.

But to allow for you to turn it off so it can’t checked against me seems really really bad.

This seems dangerous to me.

I can think of a few use cases where this is useful. I think confirmation of payee causes more problems than it solves and I’d rather it didn’t exist, but at least I can now opt out of it with one bank.

I think confirmation of payee causes more problems than it solves

Insomuch that it gives the illusion a transfer is safe as it’s going to the “right person”, but that “right person” can still be a scammer?

there is a few banks which show that name of the account holder held by the bank when adding as a payee. That can easily be abused by testing account numbers and then trying to find a matching name on social media.

That can easily be abused by testing account numbers and then trying to find a matching name on social media.

This is one of the worst conspiracies I’ve ever seen.

So you think someone will guess numbers, find out it matches to John Smith and then somehow find them on Twitter?

What are you going to do with my bank account and sort code anyway? Set up a direct debit for me?