Absolutely! I just don’t mind being among the first to do that!

As a thought experiment, what (if anything) might put you and @ndrw off from applying? (I’m talking reasonable possibilities, not selling your first born etc).

An onerous onboarding process would kill it for me. I think that would be the only thing though.

Anything that has to be done via snail mail (other than receiving the card), eligibility requirements that aren’t UK standard (pay in X, have X direct debits), or fees for everyday things

I am confirm that I’m not the real @N26Throwaway, although I do intend to apply for a Chase account as soon as I can as well.

Partly the card collection thing, partly because I’m genuinely curious to try them out as I’ve already tried almost every other bank at least once (I never did try M&S Bank though, I applied to them once when they were running a switch incentive and they wouldn’t accept me).

Hopefully Chase will be willing to give me an account.

@PeterG I’m inclined to agree with you that the expected proposition here is likely to be a middle ground between “ultimate fintech” and a service-driven, integrated, full-featured (but digital) bank. I don’t think we will fully have that on day one though, so I do wonder how the launch will go.

Bye virgin money as soon as this launched

Would it be premature to suggest that Virgin Money will panic and almost immediately attempt to acquire TSB?

I’ve thought that would happen for a while, with them both being headquartered in Scotland and both not really having the scale to compete effectively (and profitably) with other traditional banks.

I don’t think so. They’ll be looking at TSB as a separate proposition - but the branch network is its albatross.

A combination might make sense, but I don’t see it being in reaction to JPM.

I am surprised so many see strength of brand as good with them. I mean JP have a decent enough rep in the USA but chase has a terrible rep. Maybe it’s the fact it’s a glossy usa bank but I am surprised people in the uk see them so differently from actual yanks who have been using them for years. 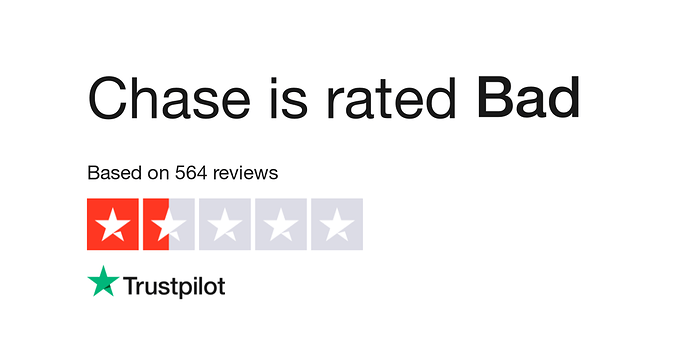 Do you agree with Chase's TrustScore? Voice your opinion today and hear what 564 customers have already said.

That’s partly why they completed a “brand separation” a while ago, so everything is branded either as plain Chase or as J P Morgan - never the two together. This probably helps Chase lift their brand perception scores as they can focus on service, while J P Morgan is regarded as a traditional brand with a level of trust so isn’t dragged down by Chase.

They’ll be looking at TSB as a separate proposition - but the branch network is its albatross.

I agree with that, which is why TSB have been cutting their network back so much over the last 2 or 3 years, especially since Debbie Crosbie became CEO. An eventual merger, with most TSBs shutting, would make sense to me. Plus Debbie is ex-CYBG, so I could see her returning to Virgin Money via the acquisition.

Also don’t forget that TSB generally has more branches across England while Virgin Money is quite Scotland-heavy (due to the Clydesdale legacy) so combining networks wouldn’t be totally insane.

With apologies to everyone on this thread who thinks otherwise, I really don’t think that Chase is known in the UK. A few finance/fintech geeks maybe, but certainly not in the general consciousness.

What that means by is that we have an, effectively, First Direct moment: a new brand from a bank (the media will play up the JPM connection) that will sink or swim on its own merits.

But I still think that the credit crisis “investment banks are evil” thing has an undercurrent and that Brits prefer a plucky startup (Starling, Monzo etc) or an established UK high street name, all other things being equal.

It’ll be fascinating to see what happens, though. My prediction is FD levels of customers: I think that’s in the 100s of thousands rather than millions.

I’ve said it before but carving up TSB might actually be good commercial sense.

really don’t think that Chase is known in the UK. A few finance/fintech geeks maybe, but certainly not in the general consciousness.

Yes, not well known - but I think their is a certain level of recognition there, even if unconscious.

Not amongst everyone, but people who follow business news or watch sport (they sponsor a lot of sport) will probably recognise them.

It gets over the “is this new company going to run off with my money” fear for some, at least, which will help.

To be frank Trustpilot is not the most trustworthy. It’s usually just disgruntled peeps airing their grievances, just look at any UK bank

It gets over the “is the new company going to run off with my money” fear for some, at least, which will help.

The bigger issue is, I think, the reverse: the sense that this is a big, faceless, American corporation that was part of the banking crisis…

the sense that this is a big, faceless, American corporation that was part of the banking crisis

People have short memories, I doubt they will think about that too much.

The big question is are memories short enough to forget about the whole European Super League fiasco!

And that is a problem (fear of a new bank) for some. I remember trying to sell people on Monzo and Starling in the early days and quite a few wouldn’t trust them. I remember somebody saying they didn’t need a good app as they could just use NatWest with MoneyDashboard!

People have short memories, I doubt they will think about that too much.

I dunno. We can agree to disagree on this - reasonable people can have different views of course - but I think the banking crisis has left a bit of a scar, and directly leads to some of the political issues we see now.

But I’ll pause there because that’s a whole different topic!

Diehard football fans might remember, but to most it was a passing media moment, brief respite from the forever cycle of Brexit and Covid

That gave me a laugh!

The news does feel a bit like that sometimes, especially lately. Stories like “Supply disruption: is Brexit or Covid to blame” seem to just go round constantly.

Not that they aren’t important, but sometimes even a news fan wants a break from it.

I think the banking crisis has left a bit of a scar, and directly leads to some of the political issues we see now.

I agree with you on that, but I think the average person (with less interest in banking) probably won’t think about it so much or directly associate it with J.P. Morgan and Chase after this amount of time.

Anyway, as you say, I’m happy to agree to disagree and get back on topic.

@N26Throwaway have your scripts picked up any pre-launch activity yet?