. A lot of big banks have made the switch from Visa to Mastercard

Did the BIN change ooi?

Either way it’s probably just volume and sway. If like Barclays cards stop working you get way more errors and you probably don’t want to upset Barclays either.

Did the BIN change ooi?

It would have. Visa cards start 4 and Mastercard starts 5

What ‘type’ of Post Office was this? Was it a ‘proper’ dedicated Post Office? Or a Post Office counter in another small shop (ie - local newsagents, grocers etc.).

The small local post office counters are fairly notorious for only accepting payments from bank cards from banks who have an agreement with the Post Office for banking services - so what they actually try and do is make a ‘cash withdrawal’ from your account (which is free to them) and then use that to pay for whatever you’re trying to do - to avoid card charges. Monzo itself is another bank which has the same issue and I’m not 100% sure what these ‘Post Office Counters’ are breaking rules by doing this - but as it’s a well known process, if the Banks and Post Office were upset, they wouldn’t clamped down on it.

Interesting, the Post Office was at the back of a branch of WH Smiths so not sure if it falls under that crtieria.

It does seem to line up with what you’re saying though, she asked me if it was debit or credit and after the Chase card was rejected she got annoyed and said she’d need to start the process all over again (I was paying Road Tax so I guess they have a process for that) if I wanted to use a credit card because I’d stated “debit” to her previous question.

Who knows but kind of annoying becuase in the queue I’d transferred some money to Chase ready for the transaction.

Is zopa 1.81% for existing clients only? I don’t see it advertised for new people.

Zopa opened - awaiting confirmation from Zopa having submitted relevant document. When open will drop £10k into the Boost 31 to get 1.95%. Unless of course someone else moves the goalposts. 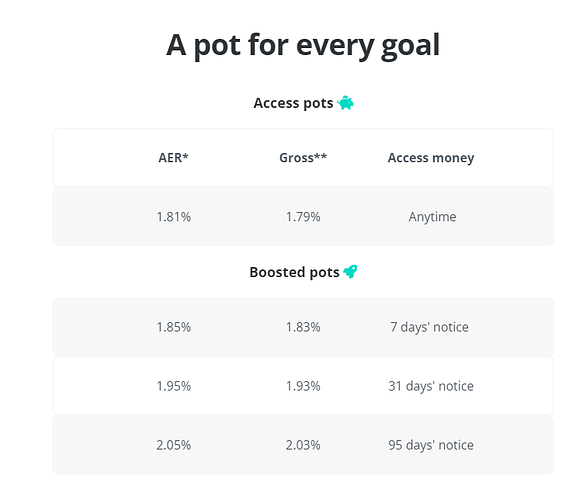 Locking in for more than a month is kinda risky imo. Interest rates will increase again 15th September, I’d imagine, and then you’ll see interest rates higher again. The 31 day notice lock could be a good option!

I’ll be moving away from Chase at the start of October I think.

So, who’s got the ‘earliest’ end date for their cashback offer?

Mine ends on the 25th Sept - but I think I was in the ‘2nd wave’ of Chase sign-ups after going on the waiting list for a week or two.

Should we expect another (different) offer announced before the end of this month to try and tempt the Cashbackers to stay after that ends?

mine is the 24th sept

How much did people end up making on cash back? I didn’t end up bothering with it in the end as wanted to keep better visibility of spending in my Monzo account.

22nd September for me.

£27 so far but I generally I kinda only used Chase when I remembered to transfer money across to it.

I so far made £87 so I’m fine with that considering it was free; plus the interest from savings/roundups.