Starling doesn’t offer this, except between your joint/additional account.

Starling does let you set up standing orders? 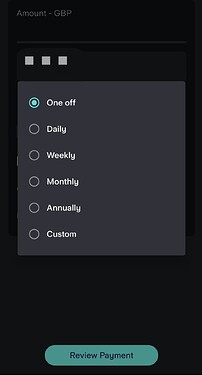 Not between your spaces and main account. Apologies not being clear.

Ie withdraw X from said space every Monday. Needs to be done manually yourself.

Wonder what the new offer might be once the year is up in September? 0.5%?

I wouldn’t bet on there being any offer. My reading was that it’s a year and done.

My instinct is that they’ll probably look at the data for a few months as users’ years are up and see how much spending goes down, and what the affordability for them would be in future offers.

Personally, I suspect the rates rises will be the bigger issue for them. If they’re looking at balances held as a success metric, then they’ll have to keep moving rates upwards.

As the rate doesn’t track base rate on savings, they could profit from the current rates thus offer another spending cashback of some kind.

Will find out in a month

I expect around 15-20th this month I should hear something as that’ll be 30 days before it ends.

Cashback: I think they’re gonna have to do something about this. We all assumed that cashback would be used to lure in customers, but the late launch of direct debits and absence of CASS means I reckon very few people have moved their income and bills to Chase. For those people, it would be very easy to stop topping up their account and spending with chase. In fact, why would they do anything else when the cashback dries up?

Savings: there’s a bit more inertia here, I suspect, and I bet Chase wooed some customers away from 0.1% interest accounts. For those people, will they bother with the marginal gains they’d get from moving their savings into a 1.75% account? I’m not sure. In fact, I have long thought that Chase were probably happy to offer such a interest rate, knowing full well that the base rate was likely to rise at some point.

Wonder what the new offer might be once the year is up in September? 0.5%?

I suspect if they get the credit card out that 1% will be tapped on their to get people to take credit out that have ran out of the debit spending currently.

I doubt it’ll be anytime soon

Yeah that was pretty bizarre. I figured some pictures were more positive/happy than others and that’s what they were going for (and some with the police or other things giving the impression of being monitored or controlled), but yeah a bit too abstract I think. However does sound like a credit card is being scoped out at least.

I wonder what Chase’s brand recognition is like in the UK.

I’m seeing their logo a lot in the Commonwealth Games, but I’m not sure that that’s because I already know them. I have a feeling I probably wouldn’t notice it too much (or if I did not pay it much attention) if I wasn’t already familiar…

Everybody I’ve mentioned Chase to/has seen my card has either said “Chase Manhattan” in an American accent or said “aren’t they American?”. People seem to know who they are (which makes sense, they’re massive and we import a lot of American cultural texts), just not that they operate in the UK.

I’d say a lot of people know Chase Bank from movies, seems to appear in a lot.

Odd situation today, I went to the post office to pay road tax and the attendant asked me whether I was paying via credit or debit, I said debit and inserted my Chase card and it instantly rejected it, she said the error on her side was because it was recognised as a credit card and for whatever reason the post office transaction process requires you to select one or the other or restart the whole process.

So I had to use a different debit card instead

Possibly the Post Office ‘scam’ where they withdraw the cash then pay the bill using that instead? But the Chase card was rejected for the cash withdrawal.

It does seem as if they are doing everything possible to say “we are Chase and we are in the UK”. Their adverts have been on TV a lot in recent months and you can’t really avoid them if you are watching the Commonwealth games. I think this is a good strategy, but I think the one drawback is that Chase is still having quite a few issues and as far as I’m aware, is still missing a few features that are standard in essentially every other UK bank.

Their adverts have been on TV a lot in recent months

Possibly, but she didn’t mention this she just said it’s saying “this is a credit card please present a debit card”

I didn’t even put in my PIN, as soon as I slotted the card it it just said “remove card”

Think the post office member may have hit the wrong button

There should be no reason this is. It is a debit card and Chase can’t just make it appear as a credit card, it will be the machine.

Most likely the payment processor doesn’t recognise / hasn’t updated / has incorrectly categorised the BIN. Monzo had this issue a lot in the early days.

I’ve always been curious how the big banks avoid this entirely, it’s always the ‘new’ banks. A lot of big banks have made the switch from Visa to Mastercard but have entirely avoided these issues. I wonder what they do differently.