It was major enough for Money Saving Expert to write an article on the transfer issues. I was also caught up in that and it was very frustrating. I’m not a Monzo fanboy, either.

A website funded by clicks, hardly Panorama is it.

Personally I find almost any article from them is just a Facebook group rant expanded into article form. They will of course receive people complaining to them which appears to be a massive number but again, I’m not going to write to a website to say how little issues I’ve had.

I don’t doubt any of the issues people have had, in the slightest. I still don’t think it’s the majority of people having them; it would be quite something for 250,000+ to be having issues.

Fair,
I think back to when Monzo started as a start up and was / still am majorly impressed.
Yes, there were teething problems which I experienced, not like I would expect from a major global bank though ( I know building from scratch here ). I was also reassured very early from the status page, the community and the communication from Monzo it was in hand. I don’t feel like that with Chase so far.
I am willing to wait and see but I don’t see them at this point being home to any spending.

I have had no issues with Monzo either tbh, was a happy customer!

That being said the forum has grown a lot since the early days when there were meet ups and in person presentations from Tom!

Slightly off topic/somewhat Chase related but it’s an interesting development that several US companies are paying for this now: 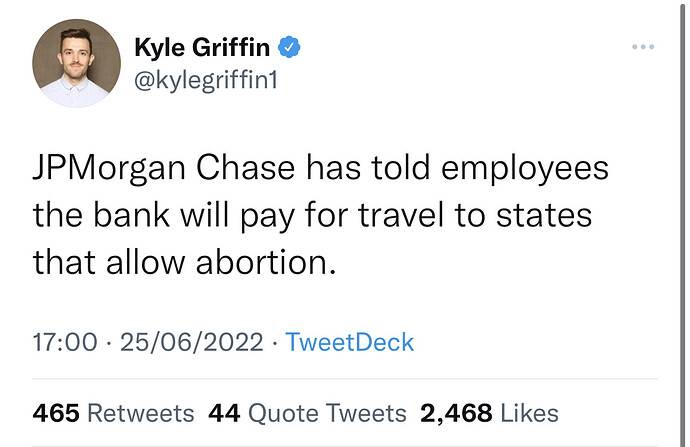 Yep likewise. I’ve been using Chase for my spending since October for the cashback and only had one issue, otherwise it’s been flawless.

I ordered train tickets from SWR and used my Chase card details from the app, went to collect the tickets from the station and was unable to because the app displays a virtual card number that’s different to the physical card and SWR only allow collections from the payment card. To their credit, Chase support explained the issue and refunded the cost of the ticket so I could buy another.

Do Chase have a solution to this problem? Or will they just have to refund anyone who runs into it?

They didn’t say so I assume not. With SWR if you use Apple Pay/Google Pay/PayPal you can collect with any UK card, but I’ve just been using Monzo instead.

If you buy something with via a curve card, using Chase to get the cashback, then move the payment to another card using the way back/time thingy in Curve, in my experience, it kept the cashback.

Can others check and confirm?

This is incorrect and Chase claws it back.

I have used chase on tfl and it revealed the physical card details to me in the transaction. I wonder if those are enabled for online payments. Cause then one will be able to use those for buying tickets that are needed to collect them.

I did last week and the app shows nothing. Nada. Zilch.

This has happened on other cards too; the stores/companies can take any card they like. Just use Apple Pay and it goes through fine. It’s an old fashioned way of checking someone’s ID.

If you book a train ticket online and go to collect from a machine it says use the same card but takes any card usually.

This was discussed in another thread somewhere and someone shared some insight, and it seems to depend how you pay that determines if they’ll accept any card or if it has to be the one paid with.

If you’re not using something like Apple Pay or PayPal as a barrier between the train network and your card details I can see how this is problematic. I don’t think it’s Chase’s issue to solve though, i think it’s a problematic way of verifying things in the modern day and it ought to be ditched.

@MalaiseForever is our resident expert on this

PayPal purchases are automatically set to any card pick up. It is not the case when paying directly via a debit/credit card, for the vast majority of retailers.

Similar to PayPal purchases, work tickets bought a corporate travel portal will automatically default to any card pick up. Thats not the case most of the time when bought through standard public retail channels.

Personally I’ve never had an issue with collecting rail tickets or refunds with a different card. If challenged (which from memory was only once getting a refund from Next) I just explained I got a new card and they shrugged and proceeded with the refund.

Been using Chase extensively since early May including visits to Serbia and Latvia. Have some DDs and have used for online payments . For physical payments I use Google pay.

Apart for one transfer delay I have had no problems and the cash back and higher interest rates are welcome. I’ll stay with Chase for the year and then look around.

Oh right, I didn’t notice they clawed it back, just checked and they did, they’re smarter than me

It depends on the operator. Some allow any card, but SWR require the card used at payment and refuse to print the tickets otherwise (I tried both the self serve machines and at a ticket office before contacting Chase).