That really is ridiculous.

Competitors that want to see what’s going on will just select another option.

It therefore only penalises the genuinely interested, sending the message that you aren’t part of what Chase want as their community.

And let’s imagine all the competitors had access. What would be the result? Would they all abandon their road maps? Of course not. Would they find out stuff they don’t already knew / couldn’t find out? No. 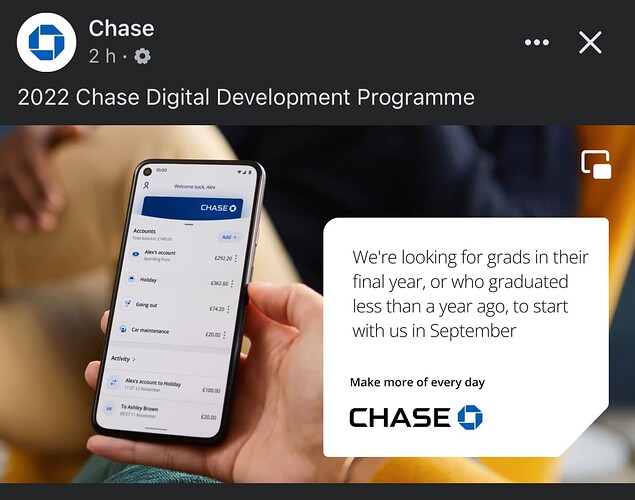 That really is ridiculous.

Competitors that want to see what’s going on will just select another option.

I don’t think it’s that. They’re not going to be sharing any secrets.

I think it’s more that the views and opinions of those who work for finance related companies will likely be very different to the views that the majority of people have as they don’t have the same background in-depth knowledge of the industry.

I think the point of the ‘community’ is to understand the general customer and how they think.

But because you work in a call centre for Aviva doesn’t make your opinions any less valid. You aren’t getting the NatWest CFO.

And because you don’t work for Barclays it doesn’t mean you won’t have a lot of knowledge about banking. You might be a regular on here for instance!

Seems a very backward process as some joe public probably wouldn’t be interested in communities and whatever else, the more likely want a product that just works out the box.

I’m sure many opened the account and either left it for dead or closed it because of no direct debit support or CASS, and possibly aren’t interested why.

Same for any other bank.

Are we sure this email is genuine? Anyone else got one?

It’s definitely not genuine. I contacted Chase about beta testing DDs and they like “lol wot?”.

Customer support may have no knowledge or not be able to disclose the beta testing. Some beta testing involves NDA’s. I’ve had to sign a few in the past.

Chase was in closed internal and partly external beta testing before the UK launch. They could have easily kept the same testers to test new features. They could also be doing what Monzo sometimes do, blind test features with groups of users before a full roll out.

I’m saying it now. The wording of that email is CLAPPED. Fake news bye everyone

It’s genuine but just to those customers who are able to test out the feature.

Who would want to be a beta tester for Direct Debits??

It’s not some innovative banking feature like Flex, or magical budgeting, it’s paying your mobile bill. And the beta testing; if it works, big deal, and if it doesn’t work, I’d rather someone else’s credit report rather than mine got messed up due to some ‘testing’ thanks very much.

Come on Chase. And stop sending links in emails too.

I mean to be fair Monzo has had testing for equally strange features so I don’t think that’s particularly fair. Ensuring it all works.

Don’t get me wrong I’m still not exactly sure why they weren’t there at launch; unless they are doing something different with them (which I doubt) but it’s a little unfair to scoff when Monzo have labs (which is essentially beta testing) for things as well.

DD is not a strange feature to be honest, its like beta testing bank transfers, who would want to risk testing that. You just make it work and launch it when its a very fundamental requirement of accounts, you have internal/private testing until it works. They will no doubt get it sorted but it perfectly normal to criticise their messy approach.

Like I said Monzo and Starling were at the start of a big fintech movement so they had more leeway. They were not trying to claim they were big banks and anyone launching now need to be a lot more feature ready to properly compete.

I’m still not exactly sure why they weren’t there at launch;

I’m curious how many banks have actually publicly launched with Direct Debits on day one? Did Metro? I can’t recall. Starling? Again, I can’t recall, but they had a very long winded onboarding process and a long private beta way before then. Certainly enough time and beta testers to make sure it worked.

The thing with these basic features is they need stress testing before you can offer them to your customers. What good is launching direct debits if your system hasn’t had the numbers to thoroughly test them yet and it falls down? You get angry customers. Acceptance issues? Angry customers. I remember how Monzo and N26 launched their’s. Beta testing should hopefully avoid most of the teething issues that plagued those in the early days. Though back then, Monzo’s entire user base were effectively beta users, so even though it was public you could probably make the argument that it was a beta.

You just make it work and launch it

Can’t do that without testing of some kind.

you have internal/private testing until it works

That’s what this is, no? The same testing of the actual current accounts via the same means. We only know about it because they widened the scope and someone new was invited into it. It’s like Apple Seed. They haven’t mass invited their entire customer base to take part in testing and they’re not going to. We’ll get it when it works.

Starling did launch with Direct Debits on day 1, but had been in private testing for about a year.

Metro launched with everything on day 1 (including a branch) but that was a bit different as they were looking to be a high-street alternative, so it was more of a big-bang launch. They were also the first truly new bank authorised in over 100 years - so had a lengthy pre-launch process to get everything in place and heavy regulatory scrutiny.

Monzo obviously didn’t because it was initially only a prepaid card, but I think Direct Debits could be set up from day 1 of the current account preview.

It’s unusual, although not unheard of, for a serious banking product to launch without them.

Revolut, Dozens and the Wise Borderless account all support Direct Debits now but didn’t at launch. That’s arguably due to a shift in focus from the initial offering, though, at Wise and Revolut especially.

I suppose while technically a current account I view this currently as a prepaid account that I can have funds transferred into which means I don’t get too caught up in the outrage they don’t have direct debits right now.

Chase aren’t making a big song and dance about this, it’s clear and upfront and the testing is a small group that we wouldn’t even know about had it not been on here.

If it’s not for you, fair enough, go about your day! Even without direct debits, it’s by far the most rewarding banking I’ve ever had - if it’s only for a year so be it.

Is the guarantee not a condition of just offering them? I actually don’t know.