Another ‘card been declined’ post. Tried to spend at Boots (online) and it didn’t seem to like it. That’s my only one so far but it seems to be happening fairly frequently across the board with no clear reason.
Hopefully teething issues, I believe there was an explanation going around suggesting it was a sort code issue and that Chase’s code is not recognised by all retailers at present.
Not sure how much truth there is to that so don’t quote me.

Your sort code wouldn’t be an issue for a card payment.

I believe there was an explanation going around suggesting it was a sort code issue and that Chase’s code is not recognised by all retailers at present.
Not sure how much truth there is to that so don’t quote me.

Presumably that would be the BIN range (Bank Identification Number, the first six digits of the card number) not being recognised everywhere, as opposed to the sort code (which would probably affect Direct Debits).

My very first Chase payment failed! Turned out in the fullness of time it was an issue with the card payment engine of Vodafone’s website.

That is indeed what I’m thinking of!

According to the MSE forum according to some post on Facebook Chase cannot process credits to their card – not refunds but credits – so betting or lottery winnings or train delay compensations couldn’t be credited to the account.

Has anyone had any experience that would prove the contrary? If not, I’d say that’s a big flaw

Come to think of it, Chase would be great to use for matched betting.

I’m not sure what the actual underlying difference is between these and actual refunds, but I’ve not used my account for anything that would have required a credit going onto my card I don’t think. But refunds work just fine and show up quite a bit faster for me.

For example, my Apple One subscription came out of Monzo, and once my Fitness+ trial ended that came out of Chase. A few days later i decided to upgrade to Apple One Premier. My fitness plus refund was returned in a matter of minutes. My original £14.95 Apple One charge took 4 days to go back onto Monzo.

When Uber compensates you for an issue, is that considered a credit? If so, that went on mine just fine.

Lottery winnings are deposited via BACs if I remember right, so this is interesting if they can’t do BACs credits.

Winnings from bets are typically returned to the payment card though similar to refunds, so would be bizarre if those don’t work. 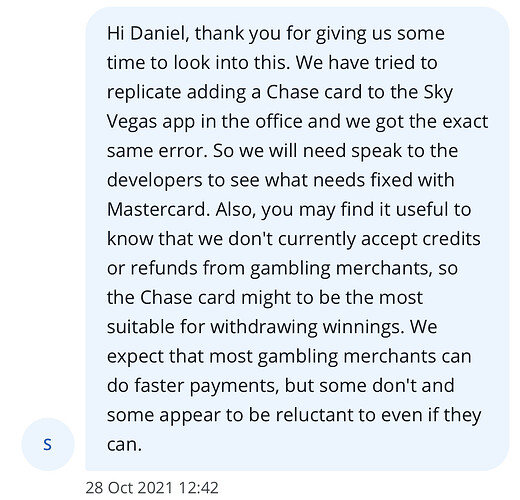 Are gambling payments treated differently to a normal card refund then? Is there a reason for that? (By all banks I mean)

To be honest, I actually think that’s a pretty exceptional support response. Grammar issues aside (we’re only human!) that agent looks as if they’ve taken then time to properly read, understand and help to resolve the issue. No script following there whatsoever.

I’ll forgive someone’s grammar for a proper personal experience like that.

I agree, I thought it was a decent response with good info and an action they’re going to take.

They do it so you know it’s real

Otherwise how do we know what’s robotic and what’s human.

Sorry, I’ll get back to watching the Matrix.

Grammar issues aside (we’re only human!)

Ergmmmm remember it is octagon people, not humans. Octagon no grammar, only substance.

If Chase couldn’t accept BACS credits, you’d never be able to pay a salary in.

Accepting BACS credits in is one of the basic functions of a current account.

The Chase sort code can definitely do that. 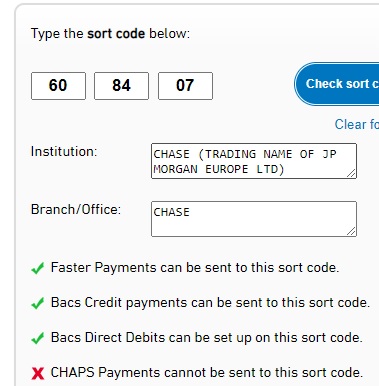 Forever excluded as I work for another bank

I’ve gone and signed up. I don’t mind these kind of initiatives.

Not surprising given this seems to be a similar initiative to Atom’s kitchen. Meaning there will likely be early access to stuff, discussions to help shape the future, and possibly an NDA. It’s a research panel after all, not really a community like this place.

You’re not going to want your competitors to have access to all that stuff.