The first card I ever had with a chip

Egg and chips then

Sorry. Dad joke as my kids would say.

I’ll get my coat

An update to the Chase UK app (

Another day, another version. Now v258 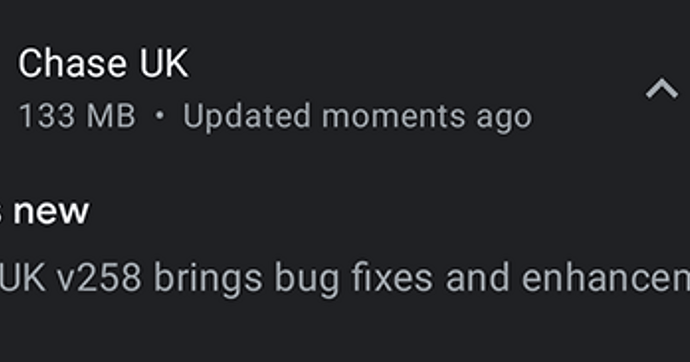 I wonder what would happen if we compared the contents of the Chase app to, say Monzo or Starling…

Had a weird dream that Monzo had been stealthily acquired by JP Morgan and the 4.0 release was actually the Chase Launch.

Probably had too much cheese before bed.

I have an unhealthy addiction to Co-op’s three cheese bloomer and initially read this part as Cheese bread.

And this bit as Cheese Lunch.

Cheese is evil. But too delicious to quit.

Don’t give them idea’s

Grabbed the android app. The options are login or join. Selecting join prompts to “click here” and there’s nothing to click. Asking for a code - no idea where the code will come from….

Yeah, same here. It’s still not ‘live’ for the general public. Seems to be only for internal/selected testing. I’d expect it balloons when launched (next week?)

It’s not just me then

<searches the App Store for “Chase”> 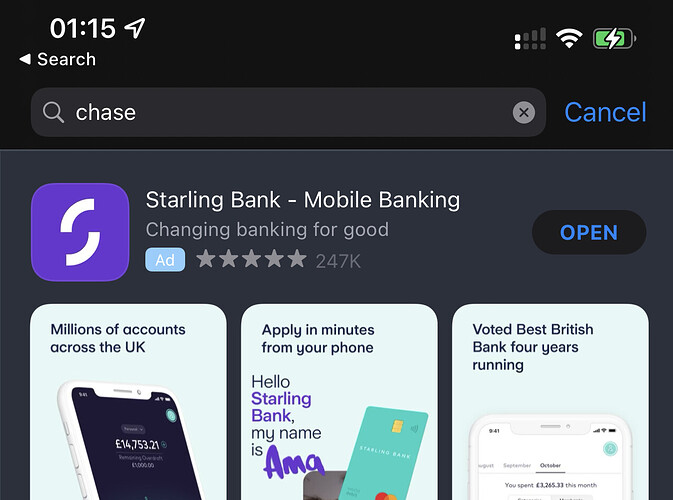 Starling are on the ball, it wouldn’t be the first time they’ve trolled a competitor (in a friendly way) during a launch period.

Remember back when Monzo announced their name change from Mondo and they guessed the new name, so setup a funny website on a similar address to the official one?

To be fair to Starling though, this isn’t really that controversial or uncommon for competitors to purchase the ad space when searching for a brand name.

And I’ve just searched for Chase and had an ad for ‘Cashplus Bank’ which I’ve never heard of.

A few other checks -

I actually know someone who works for cash plus. I had not heard of them either until he started working there.

Ona side point I notice monzo has 65k ratings but starling has 245k which seems very fishy given monzo has over 5m customer and starling is a million and a bit. It means 1/5 of their customers of all time rated them and that’s not even covering the android iOS split.
Very weird…

On Android, Starling has 56k reviews in the Google Play Store and Monzo has 61k.

I’ve just finished a survey which asked my opinion on an advert for Chase’s new current account and it looked like a finished product. The rate was given in the voiceover so this will give it scope to be varied but in it it stated that it would offer 1% cashback on ‘everyday’* debit card spending for the first twelve months. *“Exclusions apply”

The rest was similar to what has already been posted, about how it will be app based, your card won’t have a number on it but instead it will be available in the app, it’ll have a call centre where you can quickly speak to a human and not have to deal with robots.

Anyone know when Chase bank is launching in th UK?

Thought we would have heard something by now

I had All the Questions before you fixed your quotes

(I wish it was me though)