12 Pro 94% capacity, feels like it dies really quickly. It was the first 5G enabled iPhone, the antennas and battery have improved so I’ll be upgrading this year.

I just charge overnight on a low voltage anker charger. Given it seems to lose about 5% a year this way and replacements are only £70, to me doesn’t seem worth doing anything else to slow this down.

My iPhone 13 Pro 1TB (bought at the end of October 2021), charged almost solely on an Apple MagSafe charger mostly each night since then (even though it does last 2ish days), and I’m on 99% battery health.

To be deemed a fault it would have to lose 20% capacity within a year, and I wasn’t, and still aren’t, on track for that. It’ll be about 16%. That’s nightly charging, with the optimisations enabled so it doesn’t complete until just before I wake up.

Slightly off topic, but if you ever need to take your iPhone in for repair (for what ever reason) and are running a beta OS, it will fail their final repair validation steps and they’ll replace your phone…

Every time I’ve taken mine in for a screen replacement (covered by my insurance) Apple end up giving me a new phone. I’ve only tried it when the beta OS is the next number increase. This happened last week too (I’m running iOS 16) so it still works.

edit: this is at the Apple Stores

I shall remember this!

wonder if it works with watches too?

Don’t think they repair watches in store. 99% sure they are sent off. No idea what tools they use there

but you’re welcome to be the guinea pig

Ah, I think you’re right, I read that somewhere! I will definitely try the beta thing if I keep the 13 this year

Are the replacements for AppleCare a brand new iPhone or is it reconditioned?

As some of the T&C say it’s a new phone but other bits of it says it’s pre-owned that’s been refurbished.

All I can say is I’ve tried it 4 times now (4th on Monday) and got a new phone each time. The ‘genius’ said that their validation checks failed and wasn’t sure why … only common thing between thing was I was running iOS beta (gen higher)

Wanted to double check with my Apple folks before replying to this, just to make sure my information is up to date, because this isn’t true from my understanding, or my experience needing hardware support with a dev machine in the past. On the off chance you were right, and I had outdated information on their processes.

Wouldn’t want people taking a risk to exploit a potential loophole in case you’re wrong, which you are! 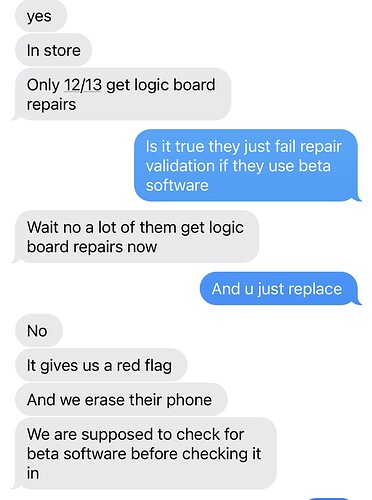 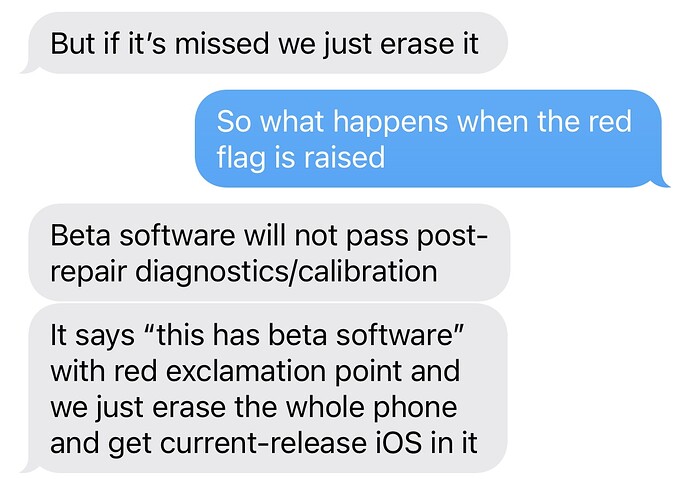 If your device was replaced, an employee likely looked the other way for you because you were nice to them, or there was some other reason for it and you’ve inferred the wrong conclusion.

Checked this too. Watches get sent off.

replacements for AppleCare a brand new iPhone or is it reconditioned?

Replacements are almost always white box models, depends on stock and employee. If they’re out they might make you wait, or they’ll give you a new one if you’re lucky, but that’s not the policy really.

Not sure, it’s not in retail packaging. The replacement phones come in a white box with just has the phone and the screen cover over it.

Strange… I’ve done it 3 times and Regent Street and once at Covent garden.

Each time they just replaced it saying it failed post replacement validation (had screen replaced 3 times and back glass once). Proof from this week were they just replaced my phone for a broken back after attempting repair and it failing… unless I’m ‘unlucky’ 4 times and something else was wrong with my phone 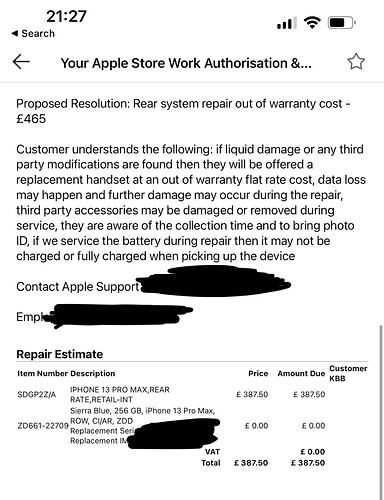 Interesting! I suspect it may have failed for some other reason, or your local store is a bit lax with the proper process. The guy did tell you he didn’t know why, and if was because of beta, it would have been flagged!

That to me says it was some other reason, or something went wrong with their equipment, or they bent the rules for you and used that as the justification. In a nutshell, you’re just very lucky I reckon. Far more than me. I’ve only had one of them bend the rules once and waive an out of warranty fee for a MacBook by filing it as a fault covered under eu consumer law.

I’ll double check with my friend later, but I’m pretty sure the back can’t simply be repaired the same way the screen can in the store given the way they’re manufactured, and so a replacement seems like the normal process to me here. I know the stores can handle replacing the screen (they have a special oven for this and it’s dope), battery, and motherboard, but I don’t know what if anything they can beyond those components.

On the spot replacements are a meant to be an exclusive perk of Apple Care. Though exceptions are made in some circumstances, beta software isn’t usually one of them.

I’ll double check with my friend later, but I’m pretty sure the back can’t simply be repaired the same way the screen can in the store given the way they’re manufactured, and so a replacement seems like the normal process to me here. I know the stores can handle replacing the screen (they have a special oven for this and it’s dope), battery, and motherboard, but I don’t know what if anything they can beyond those components.

I believe with the latest iPhones they can just replace the back too. So no more “accidentally” breaking the back and getting a new phone just as AppleCare+ is about to run out, coincidentally.

Edit: or maybe not, seeing your edit, but I am sure they changed it

) basically they get a shell and move everything over from my current phone to the shell (logic board, camera, screen etc). Got a call within 2 hours after dropping my phone off and they said it didn’t work as it failed their validation tests (what the tests were I don’t know)

The Covent Garden store could be a little more lax on the rules (although it would surprise me) as I once got my watch repaired for free as the quote for the work and the actual cost were different. They couldn’t discount the repair cost down to the quote price so they said just take it and go

4th time…… how? Are you unlucky? I would be expecting an internal flag next to my Apple ID pretty soon (if that is a thing…. I’m sure it is!).

Do you mean a new phone - in retail packaging? Seems unlikely when they have stock of refurbs (also in boxes).

Different instances over the years

I’m not that bad