Is imitation the greatest form of flattery or is this just theft? I immediately thought “why is Hot Chip dressed as a boiler?” 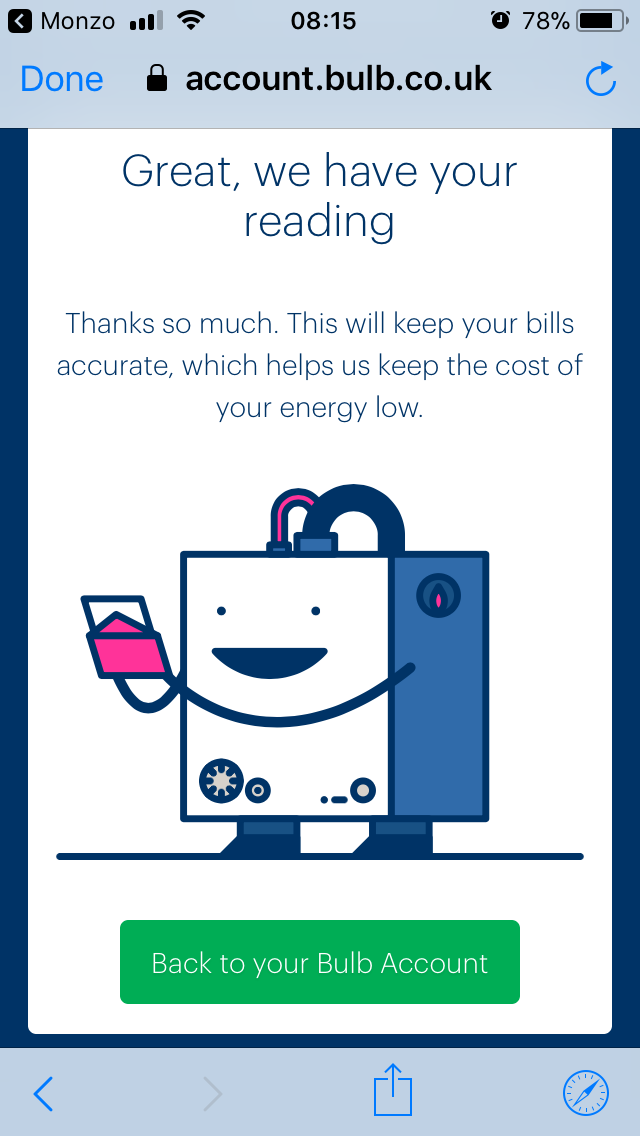 yeah, disappointing (though not unexpected). For me the increase works out as a 4% increase. But I did a couple of quick searches and they are actually still the cheapest for me, even after the increase, so I guess I’ll have to live with this …

I think there’s one company who quoted me a saving of £38 per year a few months ago, which probably isn’t worth switching for. They are probably also subject to the rise in prices, so probably aren’t cheaper anymore.

Hello - switching to Bulb Energy has been great. People can do it through testing the Monzo Marketplace; but if you do not yet have access to that, and want to earn £50 for switching, please feel free to use my referal link… bulb.co.uk/refer/nick3188

@nick69g please put your referral link in the wiki we have at Referral Wiki: Post/Find Here

@Ganey, sorry to bring up an old post but I was wondering if you were still having issues with this?

When you signed up, did you have to say you have an Economy 7 meter?

I ask because I’m about to switch and have the same BG Tariff ending next month.

That’s okay, at the moment I still submit both readings for the electric, the Saturday one never increases. It causes a warning message sometimes that the reading is different than expected but you can just click ‘OK’ with it anyway. I tend to submit with the app they have now, which doesn’t have any warnings about the value being the same as last month.

I signed up without saying it was economy 7, the meter has a ‘total’ option which you can just submit to start with, eventually they get in touch for both readings, but they’re really friendly and good about it all.

They are apparently aiming for thier own smart meters in Q3 this year though, these will be the newer type which work across different suppliers.

I messaged them earlier this week about the dual readings and incorrect estimates, here’s the response:

we’re currently working on a fix to allow you to submit the same reading through our website, and we’ll let you know when that happens. We’re trying to do this in the next couple of weeks. when this happens we can also stop the system generating estimates for the night reading so it will stay the same. When all that has been done, we will generate new bills to reflect the situation and factor out estimates generated for the fixed reading.

I have to say, that I’m not particularly impressed by bulb:

I switched to them and despite giving them opening meter reads, they use “estimated reads” which were off quite significantly. I called them and they told me that there was an industry agreed practice under which the old supplier could override customer supplied reads. I would have to file a dispute (I have switched suppliers yearly for the last 7 years, but never had this issue.) so I filed the dispute, and was told it could take 4-6 weeks. Nothing happens after 6 weeks, so I talk to them again. They say they haven’t heard back yet, I should chase it up. I call my old supplier, and they say they have never heard about the dispute. This has been going back and forth for quite a while now: bulb insists they are waiting for my old supplier, my old supplier insist they have never heard of a dispute. Who’s lying I do not know, but it’s very frustrating…

are we talking a few quid or hundreds? Sometimes life’s too short to worry about it.

Oh, it’s a few quids. I would love to withdraw the dispute, but bulb won’t let me…

Hi all I had an awful time with bulb having nothing but issues from day one. With them taking two lots of money from my card each month and it took lots of phone calls and copies of bank statements for me to get it back.
I have now moved to a company called outfoxthemarket ( outfoxthemarket.co.uk) my monthly charge with bulb was £57 and swapping to out fox the market it went down to £41 Purley because they don’t charge a standing charge for each meter it is just a small monthly membership fee. You also get a wholesale price for your energy which means I’m quids in. The limit the amount of people that can join each day meaning the service is never flooded or over subscribed staff are very friendly and helpful.
Check them out…

As for feedback, I personally just want a simple life.

Exactly, and great comms as well.

weird that the ‘membership fee’ varies with usage though.

Can’t show a not available in your area page instead of an error page?

A post was merged into an existing topic: Referral Wiki: Post/Find Here

To counter most peoples good feedback, I’ve actually had a fairly poor start with Bulb.

For me, they seem just as crap as any other energy supplier. Plus if you ever have a problem they have the most poorly staffed live chat service in the world, think Monzo at the height of its Cop trouble, but waiting even longer after every response.

Bulb has consistently not been the cheapest option in my last two annual switches. Hasn’t even come close.

They just ignore my submitted ones!