A idea for pots where, if you usually get a set amount every month, any amount over that gets automatically put into a designated pot as soon as you’re paid so you’re not tempted to blow it all on an impulse buy (looking at you, Amazon!)

On the flipside, you could nominate this same pot to “top-up” your earnings (as a sort of automated emergency fund) if it’s below

your normal earnings, say for instance if Payroll made a boo-boo. Happens a lot where I work

ALSO: once the Marketplace is sorted, this could be used to automatically invest overtime gains in e.g. Wealthsimple, Wealthify, Nutmeg, insert-choice-here.

You just set it and forget it.

No mess, no fuss. You don’t see the money, you don’t think about the money; it’s just put away for a rainy day! (and hopefully racking up some sweet compound interest!)

Don’t know if someone’s already come up with something like this, but I just thought of it and wanted to put it out there.

think you can do some of this with IFTTT

Unfortunately, there’s no trigger for incoming transactions so unless someone on the developer platform can cook something up, there’s no way to do this atm

Suggest a trigger on IFTTT

I submitted one last night for a trigger on “Balance” so hopefully they’ll add that!

Do you mean on the thread or is there a dedicated platform for suggestions?

Inside IFTTT you can request new triggers (at the bottom): 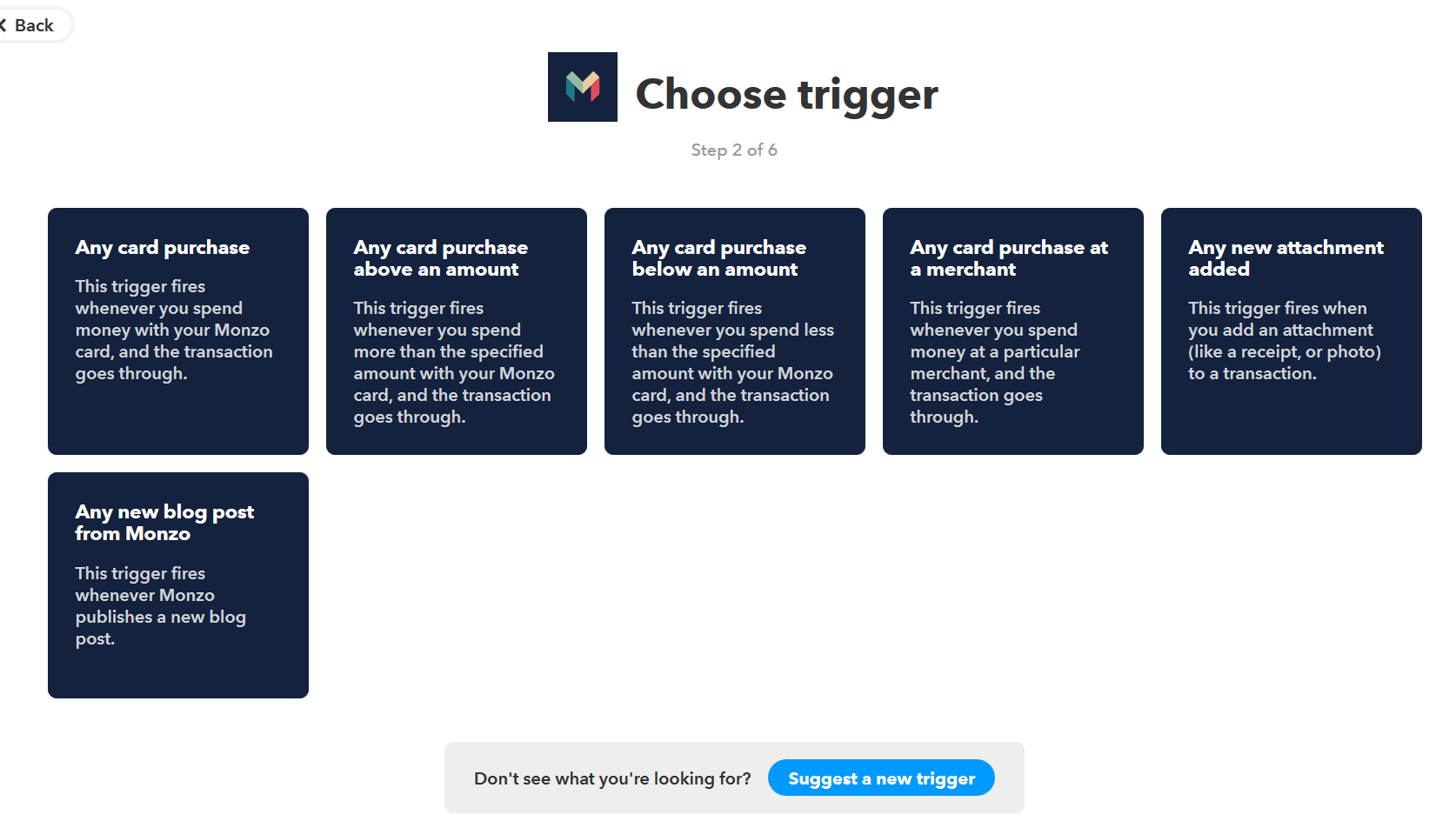 So I submitted one last night for “Balance” with the description of something like “if balance is at a certain level, then trigger the script” (not quite the wording… but something like that

You can chose from these when creating a new Applet.

You could use the webhooks then based on the information within the requested, make an IFTTT request to do the pot transfer.

You’d have to setup the webhook on https://developers.monzo.com and be comfortable setting up a way of reading the data from the webhook then pushing it over to IFTTT. You might be able to just use the webhooks IFTTT but I’m not sure how good it is at processing the webhook data from Monzo

@Ganey, IFTTT Platform will not let me sign up without a company website, which I don’t have (I’m employed, but not in that capacity. I’m a typist who tinkers with things in her spare time). Is there any way around this that you know of? I am interested in learning to make “custom” IFTTT applets but IFTTT doesn’t seem to be forthcoming

I have no idea on your skills / coding levels so please bear with me on this if it’s too advanced / basic.

I’d had a quick look and it doesn’t seem you can parse JSON with IFTTT, only send values, so a 3rd party service will be required. Hopefully someone will add a JSON parser / checker to IFTTT at some point, shouldn’t be too difficult for someone to setup

there’s no trigger for incoming transactions

This trigger is coming