Skipton still at 0.65%, but only for existing customers.

Yeah, only for existing customers though.

And Virgin Money at 0.5% for existing until next month.

Just opened an instant saver with Atom, thought might as well spread my cash around a bit. Not the best rate at 0.37%, but I’m not that fussed about rates when it’s an instant saver account.

Money moves effortless between Atom and Monzo too

True, that’s one thing Atom do have going for them: it’s a truly instant access account so you get your money as soon as you make a withdrawal.

I love this about Atom’s instant saver. I get a little giddy every time I make a withdrawal. Who’s gonna win this time? Atom’s swanky transfer complete animation, or Monzo’s push notification?

It’s always a nail biter but the push notification usually nabs it by a few milliseconds.

It’s astonishing no other bank does it as quick as this. I don’t think they’re using any new fancy technology to do it. It’s just FPS AFAIK.

The only that would make the Monzo/Atom setup better, is if Monzo were to get them integrated in the market place. So all this instantaneous wizardry can happen from within a single app.

The only that would make the Monzo/Atom setup better, is if Monzo were to get them integrated in the market place. So all this instantaneous wizardry can happen from within a single app.

Or maybe they’d offer 0.2% interest and a 24 hour withdrawal, like Monzo tend to…

It’s astonishing no other bank does it as quick as this. I don’t think they’re using any new fancy technology to do it. It’s just FPS AFAIK.

At a guess, and I have no idea if this is true, I would say that Atom are probably using “true” Faster Payments, as you say.

They are a direct participant in the FP Scheme, so I imagine they execute each payment immediately via their own direct connection.

A lot of other banks, especially savings providers, probably batch-process the payments so even though they are sent as Faster Payments, they likely only send a “batch” of payments every 5 minutes or so. If they also use an intermediary bank, rather than a direct connection, this can add further delay.

Most people won’t notice it, but with instant notifications the difference is obvious!

I think Atom is now the proud owner of the stupidest, most useless update note I’ve ever seen, without exaggeration. Did they give all the copywriters a day off and get a 10 y/o girl to write this? 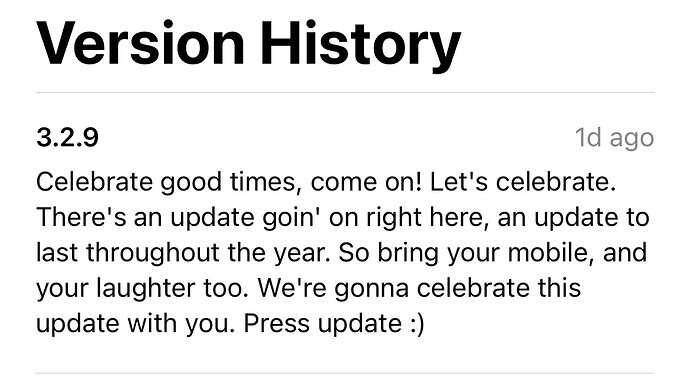 I don’t see why it’s so difficult for companies to actually just say what the updates are in this version. The only thing that annoys me more is when they just write ‘bug fixes’ literally every time.

I don’t mind cutesy app updates as long as there is some actual content in it. But I want to know what changes there are, not just that I need to celebrate. And if the update is to last throughout the year, does it mean they won’t update the app anymore?

Lucky Trip is my gold standard of app update notes 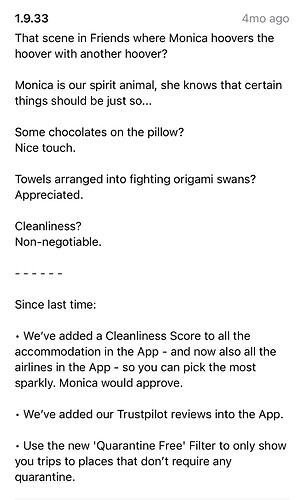 Agreed on both points. Atom, you are not my best mate or my best bud, and adopting that attitude is, frankly, patronising and comes across as insincere and manipulative. It is more likely to alienate me rather than convince me to open an(other) account.

Not the best rate at 0.37%, but I’m not that fussed about rates when it’s an instant saver account.

I got a notification to say it had changed, I swiped it away as was going to read it later. Totally forgot to go back to check. That was maybe 3 days ago now.

I never knew it wasn’t 0.5%. Was that just for new accounts?

No, they lowered it briefly last month I think but it’s nice to see it back at 0.5%. I might move the remainder of my emergency fund to Atom from Marcus now

Ah, so it was in my head then. Or I was thinking of Tandem