I can’t talk too much about what goes on due to NDA,

Oh, I’m sure you mentioned it before but I didn’t remember. Are you some kind of insider? How do I get in?

And hope you can get the ball rolling – their implementation is neither more secure, nor more convenient

This is the bit I always struggle with. Such hubris to think that competitors care - and that if they do, will change all their plans to scupper.

Oh no, our competitors might learn that we’re working on FaceID and beat us to it! Oh wait…

But I totally understand the concerns. If I had an NDA anywhere I just wouldn’t talk about anything

Are you some kind of insider? How do I get in?

I’m part of the customer panel. I’m not sure on the process to get in these days, as it was something they pushed on their blog a few years ago and I signed up. The form to sign up no longer seems to be available, but new customers are being added regularly, so there probably is some process.

May just be worth sending off an email referencing this blog post, and ask how you can get involved 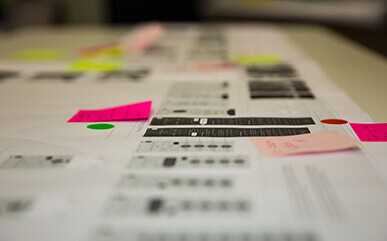 How we’ve built the bank with our customers

Oh, very interesting. I might bite the bullet and open an account just so I have somewhere to chuck my emergency savings, separate from other cash I hold (as my bank accounts tend to sit empty all month to maximise interest)

I’ve been advocating in the kitchen for them to consider using Touch ID/face ID as the default, with passcode as fallback as first step for authentication purely because it’s faster, and to then use their own proprietary biometrics for the stuff that requires a second method of authentication.

I wouldn’t even be happy with that personally.

I want the ability to set a password (instead of a PIN) for secondary authentication, which I can save in iCloud Keychain and automatically input using system Face ID - like Starling.

For primary login, I want system Face ID, and fallback to their passcode PIN option (as Barclays, for example, do).

This would be infinitely better than their current approach.

For them to somehow claim that their poorly engineered “Face ID” is better than the system-level Secure Element-based Face ID is risible and an insult to customers. It’s really putting me off Atom as it’s so irritating, and I consider it very hubristic of them to think they can “do better” than Apple with their tightly integrated and secured software-hardware solution. Atom is just some cheap AI on a 2D image, nowhere near as sophisticated (or secure).

Something I’ll query myself in app today, because I’m not too happy with that.

Just done. Expected cookie cutter response of that they don’t currently support Touch ID and Facebook Face ID (not sure what went wrong with my autocorrect there!

) but it’s something they’re still considering and may add support for in the future.

It’s been passed up the chain as customer feedback. I’d suggest others ask for it too. Atom are quite receptive, so if enough people pester, my guess is they’ll do it, eventually. Wish they weren’t so darn slow!

I just signed up for Atom and while the app is nothing great the transfers are indeed instant.

What I don’t understand is that they’re blatantly ripping off FaceID by calling it the exact same thing Apple calls it and they’re getting away with it. Also there is no reason the phone should be upright for it to work, but it seems that’s the case… first world problems, I know

I’m part of the customer panel

Like you, I’m one of the customer panel, but I’m blowed if I recall any reference to NDA’s (unless you’re accessing features that I’m not, of course).

Whilst true, Atom’s existed a few years before Apple’s, so perhaps the other way around?

Curious if anyone actually owns the rights for that name.

Interesting! When did you join? I was early through the doors in 2017, and had to agree to an NDA over email. This was long before the kitchen existed though. Perhaps it’s all changed now and the NDA I signed no longer replies. As far as I’m aware, in the kitchen we all get the same stuff. Prior to that though, I have seen some very interesting things that have not yet come to fruition nor been touched upon in the kitchen. I just don’t get into any specifics that aren’t already public knowledge to be safe.

As far as I’m aware, in the kitchen we all get the same stuff.

Yes, that’s my understanding of it. I like Atom as a company - keen but not slick and increasingly prepared to listen (hence the Kitchen).

Got a notification in app about their interest rate going down to 0.5% from 21st December.

Tandem have a 0.75% green saver if you sign up to beta test their new app and fixed saver. I think it might be the best instant access saver at this time.

I can’t get into the app to check mine.

Sign in and then just get a rotating circle

Sign in and then just get a rotating circle

Same for me! System outage?

Was this a push notification, or an in app one? I’ve had no such communication as yet.

With Marcus now down to 0.5 and atom now following, I suspect Tandem will too before long, and I’m getting tired of having to move around, so I’ll probably just stick with splitting between Marcus and Atom for now until things start improving.

It was in app. But like others I can’t get in now either.

Thanks! Just checked saw the in app notification. Would be nice to have either gotten an email or push notification about this too, as I rarely have cause to log in to the atom app, so it’s easy to miss.

No troubles signing in here though, so here’s a screenshot of the notification for others who can’t access the app right now. 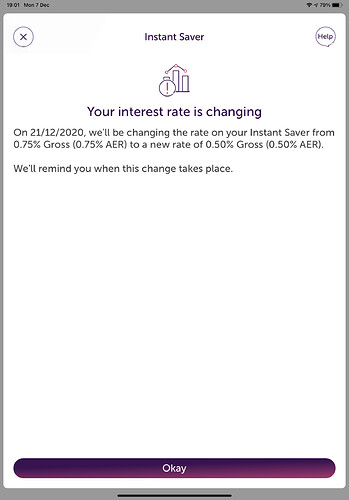 It lets me in too now – could’ve been a temporary glitch.

I think Tandem will reduce it once they’re out of beta – this is to entice customers to join. Going off topic here but I wonder how they’re making money now that all their credit cards have been shut down?

Again, in App notifications are poor.

Who seriously checks in App regularly?

Just had to get up and turn the big light on as their ridiculous Face ID claimed it was too dark to work. Good job I rarely have to open the app.