Apparently my interest charge is going down again! Not that it matters but there was some error on my previous interest rate drop which meant it should be about 2.7% lower than what it technically is.

Given I pay it off monthly in full it doesn’t matter I suppose but still, the only thing going down at the moment

I genuinely have no idea what the interest rate is on my Amex account.

As I always pay in full on all my cards, it’s never something I seek out or consider when taking a credit card.

Interest rates are listed inside the pdf statement in statements section of amex app.

As I said before though, all meaningless as always pay in full.

So here’s a weird one, my direct debit date this month was the 17th September meaning it was impacted by the additional Bank Holiday.

My payment wasn’t taken and I see a DD attempt in my AMEX account followed by a returned payment of the same amount.

I’ve just spoken to Amex and they say that they attempted to take the payment, but it was cancelled by Monzo.

I haven’t had a returned payment fee applied (yet) but onto Monzo now to find out why this has happened.

I swear with Amex the DD is due like 2 weeks before the payment so as long as you pay it you shouldn’t get a fee.

I had the same thing happen once and they charged me a fee. I gave up trying to get the refund.

It didn’t seem to be resolved or explained. My DD date was X, nothing came out but the Amex balance had changed to clear the balance. Fine, it often does this.

I check my bank and it wasn’t taken. I left it a couple days, my Amex balance returned to the negative and I had to manually pay my balance.

No issues as the payment still cleared before my payment due date. But I was hit with a fee for the returned DD even though it was fully paid before my due date and even now my bank had zero idea about any DD request; so Amex issue that they refused to acknowledge.

I had a similar thing happening and they did charge me an interest fee, very minor £0.07, but it was refunded.

I usually pay my credit cards in full at the beginning of the month, to reset my spendings for the month, but also have a DD to pay it in full if I forget, but this usually gets updated after the payment.

Last month I did make the full payment later and then realised it was to close to the DD date, so I contacted AmEx and asked them for solutions so I won’t be double charged, their suggestion was to cancel the DD from the source bank given the DD date is close.

The DD was applied and then removed due to the refusal from my bank, but towards the end the statement I was charged an interest fee, that 7p.

I had a chat with them and they said that the interest is for the pseudo credit they apply when the DD is due, I’ll attach a screenshot below.

Luckily, me being a “loyal card member” with a “good payment history”, they were able to remove the fee for me as a “one-time courtesy” again it’s £0.07 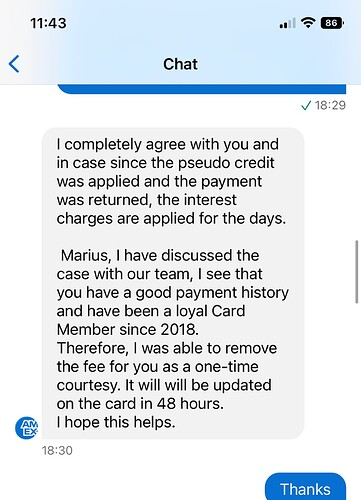 A couple years back I did the exact same (paid in full before the DD came out) and got charged a returned DD fee when I cancelled the DD and didn’t get a refund.

I’m obviously not as well liked at Amex

They probably did a large PowerPoint presentation in the team meeting about your account, everyone discussed your last 24 months transactions, and whilst some wanted to send a deadlock letter, it was finally agreed with board level approval to credit you 7p.

I swear with Amex the DD is due like 2 weeks before the payment so as long as you pay it you shouldn’t get a fee.

Why do Amex take payment 2 weeks before the payment date? Every other credit card seems to take their payment on the actual payment date. I asked Amex once but got a very woolly answer.

It makes no sense, but then you could choose not to pay by DD and just pay by transfer closer to due date. As long as you don’t forget of course

I like to pay in full by DD (Martin Lewis would be proud of me). It’s just all other providers seem to take the payments in full on the payment date. I guess Amex do their own thing. Good bit of extra revenue for them getting the full balance two weeks in advance.

Don’t worry. My Amex is paid the same as your’s. By DD, two weeks before the due date.

Bemused me when I first had the card two years ago, but used to it now.

Only spend what I have and don’t use credit cards as credit cards (i.e. My balance never rolls on), so always have the funds to PAY IN FULL

I do exactly the same

I don’t mind it too much - doesn’t leave much margin for error. However I do just have the DD set to the minimum and pay the rest manually if needs be or I haven’t paid the lot on payday.

So to follow up on my issue, Monzo came back with a very extensive response and a letter for me without even having to ask. I’m actually really impressed - there was no back and forth, just one message from me explaining the issue in detail and a reply an hour later with a complete and detailed response.

Basically AMEX tried to take the payment on an inactive Direct Debit instruction.

This was probably because of my slightly complicated history with AMEX. I’ve recently moved to my fourth different card (Platinum). Instead of applying fresh, I upgraded my old AMEX Rewards Credit Card, so I’m thinking they tried to use the DD instruction tied to that card that hadn’t been used for a very very long time.
It’s also quite likely that I cancelled this DD instruction, but if that were the case, I would have expected AMEX to have been aware that the DD had been cancelled. Are merchants notified when a customer cancels a direct debit?

Anyway, to fix it I just asked AMEX to remove the DD on the account, so that I could set it up fresh again, then just paid the outstanding balance via their new open banking integration.

I don’t mind it too much - doesn’t leave much margin for error.

Yeah, I quite like the fact that AMEX do this. It gave me more than enough time to notice and fix the issue before being charged their astronomical interest rate. If this had happened on my other ‘borrowing’ card, it wouldn’t have ended so well.

And as for the fee, there are ‘returned payment’ fees as well as ‘late payment’ fees, but having spoken to AMEX, I’ll only be charged that if Monzo charge AMEX for attempting the transaction.

i believe inactive in this case means no DD were collected on that mandate for more than 12 months.

You will find, or at least I did, with Amex, that your account number stays the same if you upgrade/downgrade your card. Those are the first 10 digits on your card. For this reason, the DD mandate/standing orders/payment references wouldn’t need updating, as the last 5 digits were, are and will be pretty much unique to you.

I like it because it means should it fail, you’re not immediately overdue

So does anyone know what Amex Pay is vs Apple Pay? Just based off an email I got today: 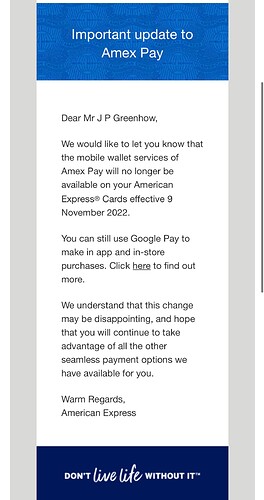